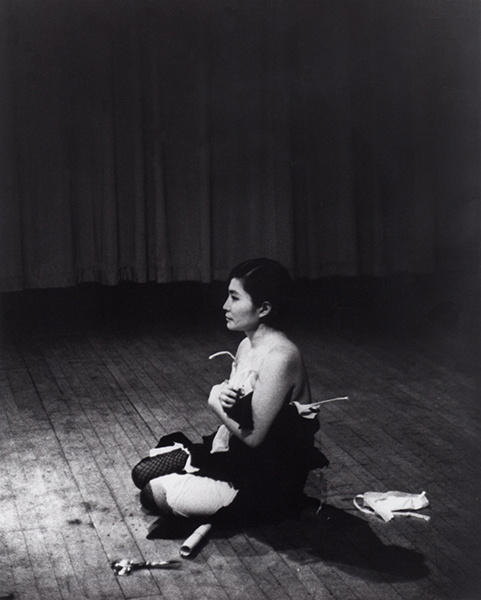 The International Council of The Museum of Modern Art Gallery, sixth floor

The Museum of Modern Art presents its first exhibition dedicated exclusively to the work of Yoko Ono, taking as its point of departure the artist’s unofficial MoMA debut in late 1971. At that time, Ono advertised her “one woman show,” titled Museum of Modern

[F]art. However, when visitors arrived at the Museum there was little evidence of her work. According to a sign outside the entrance, Ono had released flies on the Museum grounds, and the public was invited to track them as they dispersed across the city. Now, over 40 years later, Yoko Ono: One Woman Show, 1960–1971 surveys the decisive decade that led up to Ono’s unauthorized exhibition at MoMA, bringing together approximately 125 of her early objects, works on paper, installations, performances, audio recordings, and films, alongside rarely seen archival materials. A number of works invite interaction, including Painting to Be Stepped On (1960/1961) and Ono’s groundbreaking performance, Bag Piece (1964). The exhibition draws upon the 2008 acquisition of the Gilbert and Lila Silverman Fluxus Collection Gift, which added approximately 100 of Ono’s artworks and related ephemera to the Museum’s holdings. Yoko Ono: One Woman Show, 1960–1971 is organized by Klaus Biesenbach, Chief Curator at Large, MoMA, and Director, MoMA PS1; and Christophe Cherix, The Robert Lehman Foundation Chief Curator of Drawings and Prints; with Francesca Wilmott, Curatorial Assistant, Department of Drawings and Prints.

Major support for the exhibition is provided by MoMA’s Wallis Annenberg Fund for Innovation in Contemporary Art through the Annenberg Foundation, BNP Paribas, and The Modern Women’s Fund.

Additional funding is provided by the MoMA Annual Exhibition Fund.