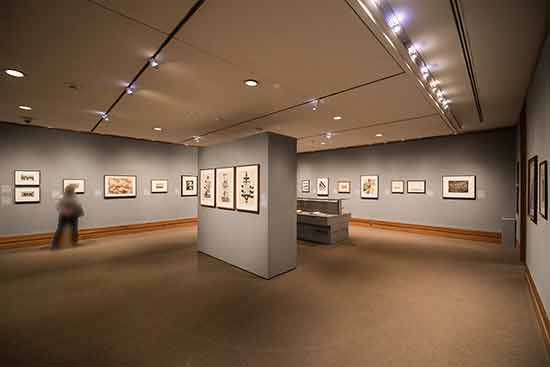 World War I and the Visual Arts is an exhibition on view at the Metropolitan Museum of Art’s Galleries numbered 691-693 on the second floor. The museum is located at 1000 5th Ave between 81st and 84th Streets and the showing will take place until January 7, 2018. It joins a number of other local exhibitions and events commemorating the centennial of America’s entry into World War I.

The museum has taken care to include, from among its collection as well as loaned, a large number of art pieces in the form of posters, prints and lithographs. The following on this page aims to share with you what’s to be seen through transcribed text from illustrative placards and artwork. You can visit the related museum’s page here…

Hanging off one war would be the Introductory Placard:

World War I and the Visual Arts

When World War I began in the summer of 1914, few could envision the extent of the devastation that would result. This exhibition explores the myriad and often contradictory ways in which artists responded to the first modern war. Drawn primarily from The Met collection, with select loans from private collections, the presentation moves chronologically – from the initial mobilization to the armistice in November 1918 and the decade that followed – showing how the war influenced subjects, techniques, materials, and form decisions, as well as artists’ basic approaches to their practices and positions in a moment of profound crisis.

Like many of their countrymen, a number of artists initially welcomed war – whether due to patriotic or nationalist sentiments, a desire for an adventure (which they assumed would be brief), or a belief that the conflict would lead to a more peaceful, spiritual, and anti-materialist era liberated from restrictive and outdated orders. Some served as soldiers, medics, or war artists, and several suffered severe injury or died. As the reality of the war became apparent, key figures changed their positions to express fierce condemnation, anguished regret, or pacifist sentiments.

Artists searched for an appropriate language to express their experiences. Some drew from avant-garde experimentation begun before the war, while others embraced a more traditional, figurative aesthetic, and still others incorporated elements from both approaches.

Propaganda in the form of posters, periodicals, postcards, illustrated books, and other printed pieces played an important role in garnering support for the war effort and determining how each side viewed the other. Later, some artists and publishers employed similar methods and materials to launch savage critiques against the war and the people, organizations, and nations they deemed responsible for it. Others turned inward, offering mournful reflections on the damage sustained by both sides and a hope that “the war to end all wars” would be the last of its kind.

The exhibition is made possible by The Schiff Foundation.

Below are photographed items which hung off the walls at the exhibition. 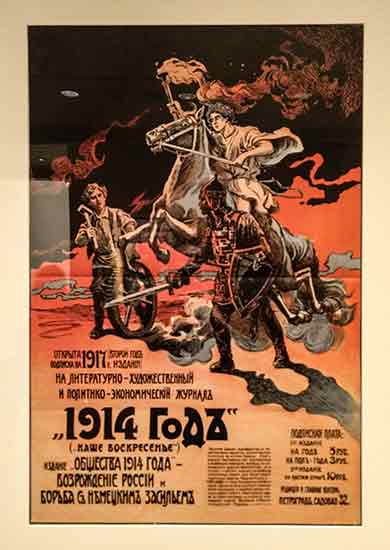 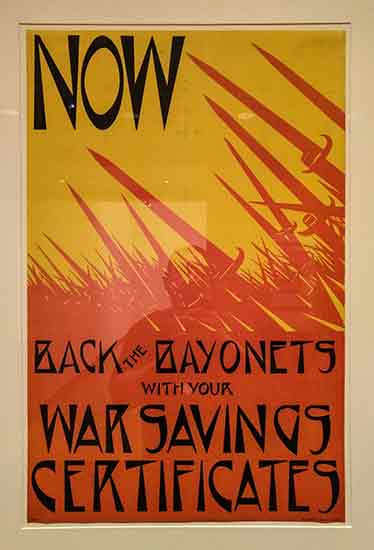 Steinlen, who moved to Paris from Brussels in 1881, had a lifelong concern with the plight of the working class and marginalized populations. The subject displaced people appears frequently in his wartime work. Between 1914 and 1915 nearly two hundred thousand refugees fled Belgium; this print, also called The March of the Orphans, depicts an exodus after a German attack. A stoic mother holding an infant leads a sea of children. Individualized subjects in the foreground give way to faceless figures in the background, which Steinlen suggests with quick, sweeping lines that blend into the vast horizon. The mother’s eyes fixate with strength and despondence on the distant unknown, while the children’s expressions remain ambiguous and unsure. The landscape behind them is suggestive of their  displacement and migration from home.

One placard titled, World War I Posters, reads as so:

Posters played an important role during World War I. They mobilized support for the war effort, summoned donations to charities, encouraged participation in war bonds, and communicated news about the fighting to a broad public. Illustrators of varying renown were call on to produce forceful images whose meaning could be quickly and easily grasped by a diverse audience. As a result, common themes and motifs emerge across posters issued on both sides of the conflict.

Upon yet another titled, The Outbreak, is the following:

On June 28, 1914, Archduke Franz Ferdinand, the heir to the Austro-Hungarian Empire, was assassinated with his wife in Sarajevo by Gavrilo Princip, a self-described Yugoslav nationalist. Due to a complex system of alliances, most of Europe (whose rulers were connected through blood or marriage) was at war by the beginning of August. The initial conflict between Austria-Hungary and Serbia soon escalated to include Germany, Russia, France, and – after Germany invaded the neutral country of Belgium – Britain, among other nations. By October, the Ottoman Empire had aligned with Germany and Austria-Hungary (the Central Powers) against Russia, Britain, and France (the Allies).

Artists, many of whom served in the war, reacted in a variety of ways. Several made self-portraits in uniform or depicted fellow soldiers. Others presented the mobilization in nationalistic and even holy terms. A related theme, particularly prominent in work sponsored by government agencies, is advanced military technology as a show of national power. Other images, however, show the disasters of war, such as refugees driven from their homes, murdered civilians, and mass devastation. Some artists from nations not yet involved in the conflict, meanwhile, created work expressing support for the Allies or condemning the German army’s attacks on Belgian and French citizens and towns, including the destruction of cultural sites such as the Louvain library in Belgium and France’s Reims Cathedral.

Here is an additional quick image gallery of photos taken during our visit to this exhibition.