Word on the Street exhibition at Times Square 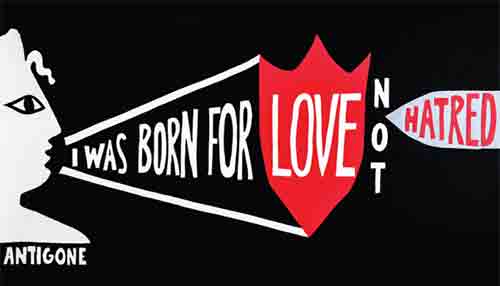 Word on the Street

(New York, N.Y.) August 21, 2017 – In partnership with House of Trees, Times Square Arts presents Word on the Street, a public art commission of political and poetic banners created by female artists and writers that speak directly to the urgent, timeless concerns of the individual, the community, and the requirements of citizenry. The exhibition will appear on street pole banners and Bigbelly solar-powered trash and recycling receptacles in Times Square from August 29, 2017 – February 2018.

Word on the Street is an ongoing text-based public art initiative produced by artist collective House of Trees, consisting of original banners and signage designed by renowned female international artists in collaboration with female refugee fabricators based in Texas. Artists and writers include Anne Carson + Amy Khoshbin, Carrie Mae Weems, and Wangechi Mutu. The ongoing series will continue with new notable female artists premiering original artwork for Times Square signage in the spring of 2018.

Originally created from felt as wearable protest expressions during the Women’s March, the Word on the Street banners and signage consist of a series of poetic political works that speak directly to the moment. The project’s deployment throughout Times Square seeks to create a network of visually disseminated texts that help articulate, empower, and support positive responses to the ever-changing social and political landscape.

On September 7th from 12pm-1pm & 6pm-9pm, Times Square Arts and artist Amy Khoshbin invite New Yorkers and Times Square visitors to Workshop on the Street, where they will create their own wearable gear with phrases and iconography made from colorful felt in the form of banners, signs, sashes, capes, or badges at the Broadway Plaza between 43rd & 44th Streets. This group is encouraged to exhibit their signs around Times Square and transform these art objects into protest materials for upcoming demonstrations or to wear simply as a celebration of free speech. Workshop on the Street engages the community in social action and encourages a physical artistic response alongside the Word on the Street banners.

House of Trees, Artist Collective, said, “We’ve asked poets and artists to respond to the politics of the day with a landscape of poetry; using phrases, art, and made-by-hand signage to inspire, and at times resist. At a time when language is being societally devalued, how can we as artists and writers use words creatively to rouse political action? Word on the Street Times Square continues this investigation with some of the most inspiring females we know.”

Anne Carson, internationally-acclaimed writer, said, “Our doctor said the fake windows would work fine: just like seeing the world and with all those bright colours to keep our spirits high.  But we could hear that in the future it was raining.  To see rain again!  We’d been told there would be no more rain.”

Debra Simon, Director of Times Square Arts, said, “Word on the Street has brought us an incredible collection of female artists to literally bring the art of protest language and handcrafted imagery from the streets to the street poles and signage in Times Square, a public space known for free speech and expression.”

House of Trees is an arts collective working to expand the public appreciation and understanding of contemporary art through the production of murals, performances, installations, and other high-visibility publicly engaged artworks. House of Trees projects are interventions in unpredictable sites, curated for both specific audiences and the larger public. House of Trees has mounted projects nationally and internationally with venues including the Kimmel Center in New York City; the Hotel Tropicana in San Antonio, Texas; and the Watermill Center in Watermill, New York, among others.  House-of-trees.org.