Japan has experienced such a surge in Novel Coronavirus infections that one prefecture has declared a state of emergency with another likely to come if the virus is not contained.

For most of May and June the country appeared to level off its numbers of infections. It would be at the end of May that Japan’s nationwide state of emergency would be lifted and not until late June and early July that a spike would materialize in such a way as to cause concern. 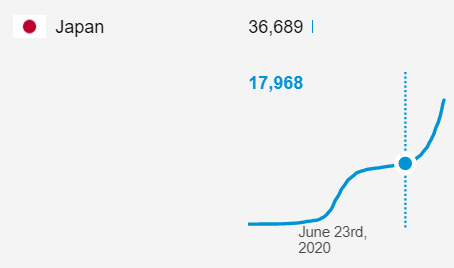 Yet, in the month of July the numbers would double to 36,689 on August 2. The good news out of all of this is that the death rate would seemingly level off going forward from 894 on June 2 to 1,011 on August 2. 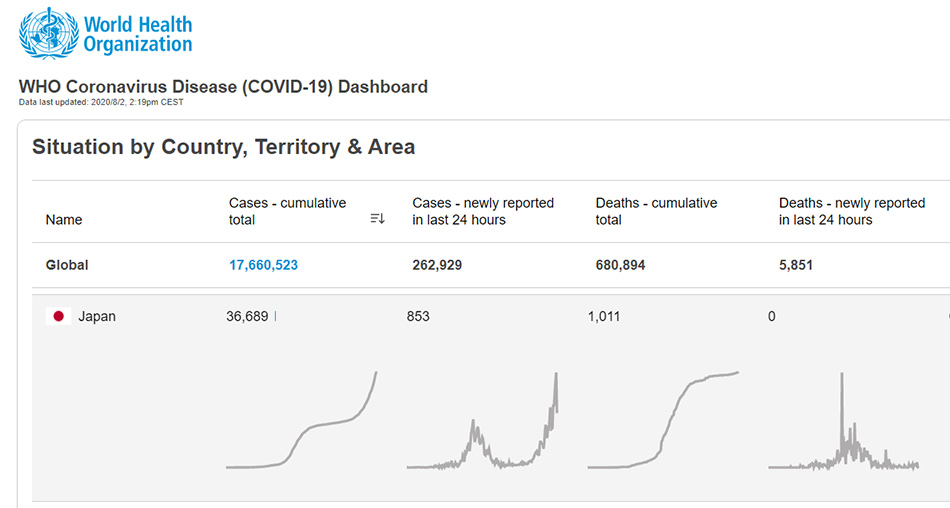 Looking at another chart, from Johns Hopkins, one can see the same sort of data that’s reported at various other sources. That is, daily cases recently reaching new peaks. 1.3k on July 29, 1.8k on July 30.

Although Tokyo would be the source of most of the country’s cases, Okinawa would also be in the latest news. The US Marine Corps located in that prefecture reported rising cases amongst their service members. A state of emergency was in Okinawa over the past week.

Start and Stripes would cite service members’ participation in July 4th celebrations as the source/cause of some of the clusters to be seen in there. More recent reports show that additional infections amongst the Marine Corps would be discovered.

A Marine Corps news item, dated July 28, makes mention of the contact tracing put in place to help contain the spread of the virus.

Nippon.com has a page reporting the case numbers as they’ve appeared within Japan’s individual prefectures. Their report, which goes back months, mostly focuses on Tokyo.

“”U.S. Naval Hospital Okinawa has taken the lead on contact tracing with support from the Joint Service COVID-19 Response Cell. The JCRC was established to provide a central hub of COVID-19 information for the joint force on Okinawa. Contact tracing is the process of identifying people who may have come into close contact with an infected person.””

Getting back to Tokyo, Governor Koike Yuriko’s latest Coronavirus Briefing made mention of the following item which should be very reminiscent of what many American cities are going through:

“We have received reports that many COVID-19 cases are linked to night life areas, shopping and entertainment districts and dining with others.“

An August 1 article in the Japan Times states that the Governor may very well be declaring a state of emergency.

NY Governor Andrew Cuomo has repeatedly reminded us “not to get cocky”. He’s restricted NYC’s advancement into reopening (contrary to all the benefits enjoyed by other regions of New York State) out of fear of what might happen. With the bulk of America now experiencing huge resurgences in cases and hospitalizations there should be no wonder about his concerns. That which is happening in Japan and other countries should come as a warning to all.