What if Seinfeld existed in Facebook’s World? 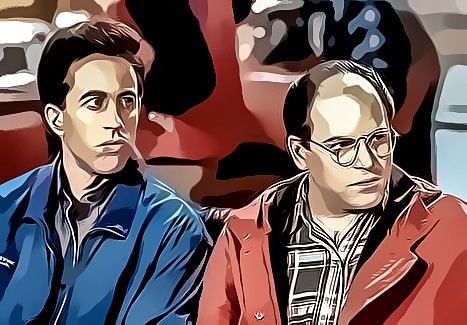 There I was thinking through a writeup concerning the world of Facebook and friend requests; and another idea hit me. What if Facebook existed around the age of Seinfeld? or what if Seinfeld took place ten years later? I rephrase it that way since let’s face it; before the early 2000s smart phones weren’t as common and how else can you have characters moving about and participating online?

I imagine how endless the possibilities would’ve been.

One episode might’ve entailed the cast being inundated with friend requests from third world countries. Half way through the episode they’d figure out it was by way of Kramer that all these people were getting through to their facebook pages. At one point Jerry’s phone would ring and it’d be his folks asking why he hadn’t friended Uncle Leo yet?…thereafter Jerry would stand there mumbling vague obscenities to himself about the NYC Parks Department and Cousin Jeffrey. Kramer would barge in complaining about some underhanded Facebook initiated scheme to rule the world, and there in the corner, a despondent George is obsessing over not having many FB friends & wondering out loud why none of the others ever respond to his constant pokes. Meanwhile, Newman’s in his apartment hatching some convoluted plan to ruin Jerry using Facebook and the Postal Service; totally unaware that his online activities are being watched by the Postmaster General sitting in some secluded room miles away.

I imagine the episode might end with Elaine lying on Jerry’s couch grumbling about Kim Kardashian’s page, all of which ends the episode with her yelling out: ‘They’re Not Real!’

…Not that there’s anything wrong with that. 😉