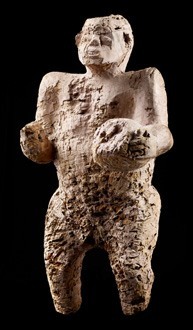 The figures created by Mbembe master carvers from southeastern Nigeria are among the earliest and most visually dramatic wood sculptures preserved from sub-Saharan Africa. Beginning December 9, a unique body of these works will go on view at The Metropolitan Museum of Art in Warriors and Mothers: Epic Mbembe Art. Created between the 17th and 19th centuries, and striking for their synthesis of intense rawness and poetry, these representations of seated figures—mothers nurturing their offspring and aggressive male warriors—were originally an integral part of monumental carved drums positioned at the epicenter of spiritual life, the heartbeat of Mbembe communities.

The exhibition is made possible by the Friends of the Department of the Arts of Africa, Oceania, and the Americas.

When these electrifying creations were presented for the first time in a Paris gallery in 1974, they immediately caught the attention of the art world. That exhibition was a groundbreaking event that revealed a tradition unlike any that had defined African art until then. Dispersed internationally among private and institutional collections, these works will be reunited in New York for the first time in Warriors and Mothers: Epic Mbembe Art. The catalyst for this presentation that will bring together loans from European and American collections is the Mother and Child Figure acquired by the Metropolitan Museum in 2010; it is one of four highly distinctive interpretations of this subject by Mbembe masters that survive and it will be featured in the exhibition.

These nurturing female exemplars will be seen in the company of the heroic male figures that are their foils, including a dramatic Standing Male Figure from a French private collection. Identified as Chief Appia, this warrior figure holds the trophy head of an enemy and exudes sheer power through its muscular physique and an especially rough surface of exposed wood whorls. Other highlights include a Seated Female Figure, at once powerful and serene, whose traces of a platform at the base remind the viewer of its original positioning at one end of a monumental drum (Fondation Beyeler, Basel); and a Seated Male Figure with an arresting expression of intense reflection that is palpable despite extensive erosion on the work’s surface.