Wake at Times Square //  Mel Chin: All Over the Place 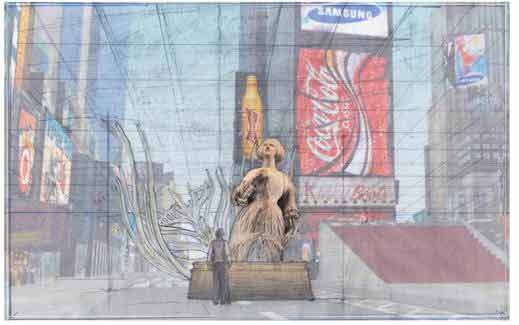 Wake at Times Square //  Mel Chin: All Over the Place

On July 11th –  Wake and Unmoored, the Times Square components of​ Mel Chin: All Over the Place​​ – an exhibition spread out over a number of sites in NYC this summer that will span Chin’s nearly four decades of artistic practice – will officially open to the public. The installations are up through September 5th, 2018 and immerse the heart of Times Square in the discussion around climate change.

Wake, commissioned by Times Square Arts, is a 24-foot-tall installation that evokes the hull of a shipwreck crossed with the skeletal remains of a marine mammal. The structure is linked with a carved, 21-foot tall animatronic female sculpture, accurately derived from a figurehead of the 19th century opera star Jenny Lind, that was once mounted on the 19th Century clipper ship, the USS Nightingale.

The artwork calls forth both the city’s triumphs and the complicated layers of its past.

New York City has become a center of trade, commerce, finance, entertainment, and tourism, but also has a complex history that included the shipping (by the USS Nightingale, among others) of guns and slaves, that augmented this burgeoning city’s economy.

The physical presence of Wake will serve as an entry point into Unmoored, an ambitious 21st Century mixed-reality (MR) public art project – developed in collaboration with Microsoft – that will be a draw for all ages and backgrounds. Unmoored​ explores​ a potential future where global warming has gone unchecked.

Wake will be on the ground on the Broadway Plaza between 46th and 47th Streets. Wake and Unmoored are free and open to the public July 11th – September 5th, 2018.

Additional information on Wake and Unmoored can be found – www.tsqarts.com

Additional information on the rest of Mel Chin: All Over the Place at the Queens Museum (running through August 12th) can be found here.