ParaPivot Exhibition Unveiling at the Metropolitan Museum of Art Videos

On April 15, 2019 atop the Metropolitan Museum of Art within its roof garden as well as within the museum itself were notable staff and others, as well as the artist herself, Alicja Kwade speaking about her exhibition, ParaPivot. It would be the seventh in a series of site-specific commissions for the rooftop.

Also, visit this other page featuring photos taken at the event.

Below are videos taken at the unveiling.

Museum Director, Max Hollein’s opening remarks. The day had begun quite beautifully with a near perfect sky and matching temperatures. Wasn’t long before the clouds moved in and the show had been taken over by a downpour. 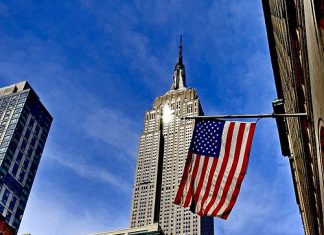 MAYOR DE BLASIO, NYPD PREPARED TO ENFORCE NEW GUIDELINES New Yorkers should text COVID to 692-692 to get regular updates on the latest developments regarding...