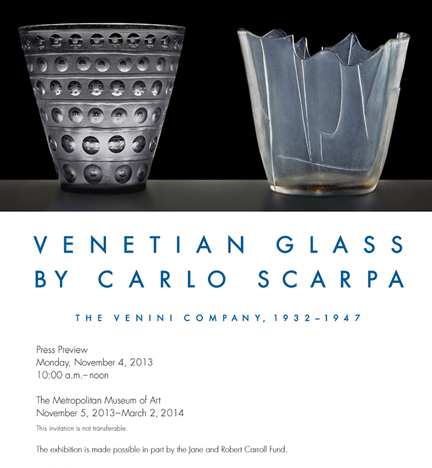 Venetian Glass by Carlo Scarpa: The Venini Company, 1932-1947 at The Metropolitan Museum of Art is devoted to the work in glass of the influential Italian architect Carlo Scarpa (1906–1978). Scarpa created a unique and multifaceted body of work in architecture and design. In 1932, while in his mid-twenties, he was hired by Paolo Venini, founder of Venini Glassworks, to be an artistic consultant to the company. Until 1947, he worked closely with Venini master glass blowers and Mr. Venini himself to create more than two dozen styles, in the process pioneering techniques, silhouettes, and colors that thoroughly modernized the ancient tradition of glass blowing. The exhibition presents the results of this unique collaboration, featuring nearly 300 carefully selected works that highlight Scarpa’s significant contribution to the art of Venetian glass.

Sheena Wagstaff, the Metropolitan Museum’s Leonard A. Lauder Chairman of the Department of Modern and Contemporary Art, said: “We have the great fortune of partnering with the prestigious museum Le Stanze del Vetro to take up a ‘once-in-a-lifetime’ opportunity to bring to New York glass works of extraordinarily high caliber, that have never before been seen in any American museum. Visitors will encounter beautiful, translucent, and ethereal glass vessels, created from Scarpa’s radical pushing and expanding of glass-blowing techniques to their absolute limit. We also have an unprecedented opportunity to show Scarpa’s glass works alongside exquisite objects drawn from the Museum’s collections of Qing porcelain, ancient Greek and Roman cast glass, and 19th-century Murano vessels, whose designs were deeply inspirational to Scarpa.”

The exhibition is made possible in part by the Jane and Robert Carroll Fund.

Carlo Scarpa was born in Venice in 1906 and spent his childhood in nearby Vicenza. He studied architecture at the Accademia di Belle Arti in Venice, graduating in 1926 with the qualification of being “professor of architectural drawing.” After completing his studies, he began teaching as an assistant to Guido Cirilli—previously his own teacher at the Accademia—who taught architecture in the newly established Venice Faculty of Architecture.

While continuing to teach and assist architects on renovation projects throughout the region, Scarpa honed his skills in an entirely different medium: glass. Between 1926 and 1932, he worked at M.V.M. Cappellin glassworks, which shut down due to bankruptcy. It was Scarpa’s next post at Venini Glassworks between 1932 and 1947, however, that radically redefined the possibilities and parameters of glass-blowing. On the Venetian island of Murano, where the glass-blowing tradition reaches back hundreds of years, the Venini factory became a center of innovation, with Scarpa leading the way. His experimentation ventured into surface texture, and he explored a range of vivid hues and colors ranging from intense reds and blacks to subtle earth tones.

Organized chronologically, the pieces on view at the Metropolitan Museum are divided into groups according to technique. The exhibition begins in 1932 with the series a bollicine, named after the bubbles of air trapped inside. The distinguishing element of this type of glass is the watery appearance that results from the large amount of crystal it contains. Among the first techniques pioneered under Scarpa’s guidance at Venini Glassworks,bollicine pieces were featured in the 18th Venice Biennale that year. Mezza filigrana are created by blowing glass as thinly as possible into objects weighing just a few ounces each; this technique debuted at the following Venice Biennale, in 1934. In the 1930s and 1940s, Scarpa’s flair for innovation was put on display at such important international showcases as the Milan Triennale and the Venice Biennale. Radical in nature, his glass pieces went far beyond being perceived merely as decorative or utilitarian objects. They attracted the attention of critics, one of whom wrote that “this production is really at the avant-garde of modernity.”

In some series, Scarpa drew inspiration from historical precedents such as ancient Roman mosaic glass and Chinese porcelain vases, breathing new life into familiar silhouettes or patterns. Beginning in 1936, Venini and Scarpa began collaborating onmurrine romane by reinterpreting the ancient Roman tradition of joining together small tiles, or murrine, of glass with a modern twist. In 1940, Scarpa revisited this technique using opaque tiles to create murrine opache, which give the glass a ceramic appearance. There are fewer than 20 known existing pieces of murrine opache, several of which will be on display in this exhibition. Scarpa’s cinesi series demonstrate that a familiarity with Chinese celadon porcelain vases was informing his developing design aesthetic.

Throughout the 15-year period between 1932 and 1947, the experiments Scarpa undertook at Venini displayed exquisite variety combined with exacting standards of craftsmanship. This historic moment, when Venetian glass design was revolutionized under the vision of a young architect, is captured in the Metropolitan Museum’s first presentation exclusively dedicated to 20th-century Murano glass.

Related Works
Several objects drawn from the Museum’s departments of Asian Art, European Sculpture and Decorative Arts, and Greek and Roman Art are included in the exhibition and displayed along with the works by Scarpa that their designs inspired.

Credits & Related Information
Venetian Glass by Carlo Scarpa: The Venini Company, 1932-1947 is presented at The Metropolitan Museum of Art by the Department of Modern and Contemporary Art under the auspices of Sheena Wagstaff. The exhibition is organized by Nicholas Cullinan, Curator, assisted by Mary Clare McKinley, Research Assistant, both of the Museum’s Department of Modern and Contemporary Art.

The exhibition is an adaptation of Carlo Scarpa. Venini 1932–1947, organized by the Fondazione Giorgio Cini, Venice, and Pentagram Stiftung for presentation at Le Stanze del Vetro, Venice, in 2012, curated by Marino Barovier.

The exhibition is accompanied by a fully illustrated catalogue (paperback, $50) providing a complete record of the glass works created at Venini during Scarpa’s tenure there as an artistic collaborator.

Among the education programs organized in conjunction with the exhibition are exhibition tours; a Sunday Studio—Light and Color: Modern Glass on Sunday, December 8, and Sunday, December 22; Drop-in Drawing—Light and Transparency: Modern Glass on Friday, December 20; and a Sunday at the Met on February 9, 2014, in which artists Carol Bove and Josiah McElheny join curator Nicholas Cullinan to discuss how Carlo Scarpa’s architecture, museological displays, and work in glass continue to influence and inspire artists today.

The exhibition will be featured on the Museum’s website at www.metmuseum.org.