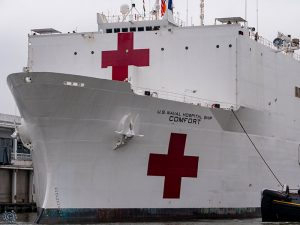 On April 21, NY Governor Andrew Cuomo and President Trump would announce in separate statements that the USNS Comfort would be leaving New York City. With the dropping averages of Novel Coronavirus confirmed infections, hospitalizations and deaths it was felt that the ship had done its service and was no longer needed.

Governor Cuomo would visit with the President in Washington midday to discuss New York’s needs in its recovery process. The Governor would appear as a guest on the MSNBC’s Deadline: White House with Nicole Wallace.

He would mention how the floating hospital was not needed anymore, ” The President sent up a navy ship, the Comfort, a hospital ship which was very good to have in case we had overflow but I said we don’t really need the Comfort anymore. It did give us comfort but we don’t need it anymore so if they need to deploy it somewhere else they should take it.”

Earlier in the evening, President Trump would hold his daily COVID-19 Task Force Press Conference during which he’d say, “I’ve asked Andrew if we could bring the Comfort back to its base in Virginia so that we can have it for other locations, and he said we would be able to do that.  Javits Center has been a great help to them, but we’ll be bringing the ship back at the earliest time.  And we’ll get it ready for its next mission, which will, I’m sure, be a very important one also.  But it was — it was an honor.  They — they reconverted it after it got there into handling an event that they were not expecting to be handling.” 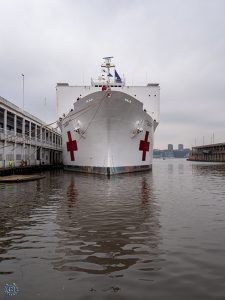 The USNS Comfort had arrived at Pier 90, located on the west side of Manhattan, on March 30. The 70,000 ton naval vessel was to serve as a backup to the city’s overflowing healthcare system. Originally meant to only handle non COVID-19 cases the hospital’s intake directives were eventually changed to help with critically ill patients infected with the virus.

It had departed on March 28 from Naval Station Norfolk in Virginia and it’s presumed that it would be returning to its home there.

Earlier this week, the Navy website announced that the ship had begun admitting patients “from hospitals in New Jersey April 17 in an effort to expand its support of the nation’s COVID-19 response efforts.”