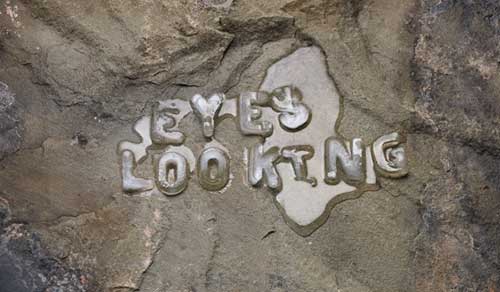 (New York, N.Y.) September 28, 2016 – In partnership with the French Institute Alliance Française (FIAF) as part of FIAF’s 2016 Crossing the Line Festival, Times Square Arts will highlight the human details that bring us together with Tim Etchells’ Eyes Looking, which will appear on Times Square’s electronic billboards from 11:57 p.m. to midnight every night in October. This project is a part of Midnight Moment, a monthly presentation by the Times Square Advertising Coalition (TSAC) and Times Square Arts.

Simultaneously a dynamic poem, a video installation, and an ephemeral sculpture, Eyes Looking creates poetry through melting text. Words made from frozen letters melt slowly across the giant screens of Times Square, with simple, everyday phrases like “eyes looking” and “hearts beating” invoking the presence of the people who cross through Times Square, the human stories at the center of the city, and the small actions that bring us together. As Etchells’ phrases lose their clarity and dissolve, they ask visitors to freeze and contemplate their relation to the rhythms and counter-rhythms of the city.

Tim Etchells, Artist, said “I’m interested to create moments of thoughtfulness and playful encounter in a public setting; the work is public but private at the same time, trying to draw each person that encounters it into a space of intimate reflection.”

Simon Dove, Co-Curator of the Crossing the Line Festival, said, “Tim has carefully considered how he can radically shift the mood in Times Square. Through the use of soft monochrome images and simple texts around human activity, the vast screens propose a powerful moment of quiet and reflection.”

Sherry Dobbin, Times Square Arts Director, said, “Tim Etchells straddles the worlds of performance and visual art, which is helpful in viewing the Midnight Moment, where the audience are also performers who move about Times Square to capture the views on all heights and shapes and sizes of screens.”

Fred Rosenberg, President of the Times Square Advertising Coalition, said, “Times Square has always been a melting pot, where international meets local and cultures collide.  We’re excited to partner with international organizations like FIAF and Crossing the Line to share a video that showcases how we are all alike with messages of unity melting across our screens.”

The following digital screens are participating in the October Midnight Moment:

Times Square Arts, the public art program of the Times Square Alliance, collaborates with contemporary artists and cultural institutions to experiment and engage with one of the world’s most iconic urban places. Through the Square’s electronic billboards, public plazas, vacant areas and popular venues, and the Alliance’s own online landscape, Times Square Arts invites leading contemporary creators to help the public see Times Square in new ways.  Times Square has always been a place of risk, innovation and creativity, and the Arts Program ensures these qualities remain central to the district’s unique identity. Generous support of Times Square Arts is provided by the. New York State Council on the Arts, the New York City Department of Cultural Affairs, and the National Endowment for the Arts. Visithttp://www.timessquarenyc.org/times-square-arts/index.aspx for more information. Follow us on Twitter and Instagram [email protected]

Tim Etchells is an artist and writer based in the UK, and Artistic Director of award winning theater company Forced Entertainment. His work shifts between performance, visual art and fiction. http://timetchells.com/

The French Institute Alliance Française (FIAF) is New York’s premiere French cultural and language center. FIAF’s mission is to create and offer New Yorkers innovative and unique programs in education and the arts that explore the evolving diversity and richness of French cultures. FIAF seeks to generate new ideas and promote cross cultural dialogue through partnerships and new platforms of expression. www.fiaf.org

Crossing the Line, now in its tenth year, is an annual citywide festival that engages international artists and New York City audiences in discovery and dialogue to re-imagine the world around us. The festival is produced by the French Institute Alliance Française (FIAF) in partnership with leading cultural institutions. This year’s edition of the festival takes place from September 22–November 3, 2016. For more information, visit www.crossingtheline.org