The Tower – A Film by Keith Maitland — Film Review

The Tower – A Film by Keith Maitland

Synopsis: 50 years ago on August 1st, 1966, a sniper rode the elevator to the top floor of the University of Texas Tower and opened fire, holding the campus hostage for 96 minutes. When the gunshots were finally silenced, the toll included 16 dead, three dozen wounded, and a shaken nation left trying to understand. Combining archival footage with rotoscopic animation in a dynamic, never-before-seen way, TOWER reveals the action-packed untold stories of the witnesses, heroes and survivors of America’s first mass school shooting, when the worst in one man brought out the best in so many others. 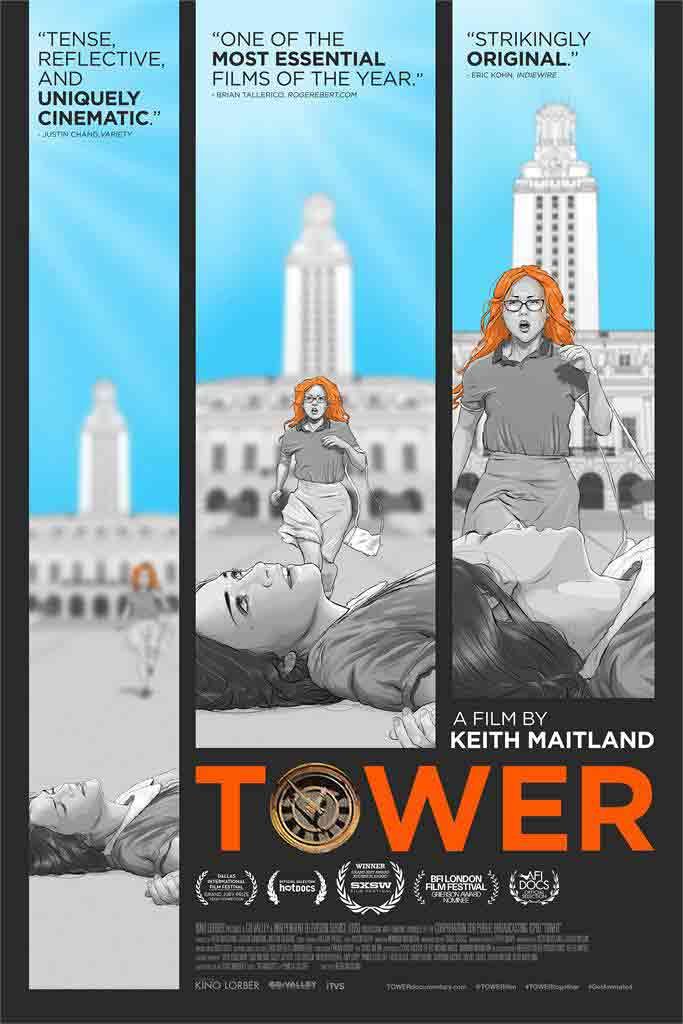 On August 1, 1966, presumably hours after having killed his mother and wife, former marine Charles Whitman would climb up to the observation deck of the 27-story clock tower of the University of Texas at which he was a student. He would have on hand an arsenal, which according to one report, was comprised of a Carbine Rifle, Sawed off shotgun, 35mm Rifle, 6mm Rifle with a Telescopic Sight and several handguns. Killing numerous individuals along the way he would then begin a siege upon the surrounding area, sniping at innocent victims as far as a quarter mile away.

Tower is the documentary / narrative chronicling the events of that day.

The Film takes a perspective dimensionally different from what could’ve been possible considering all the archived material available. Not that one path might be better than another. I wouldn’t know. It’s merely an observation. Nevertheless, the filmmakers’ approach of retelling this story through the interspersing of rotoscopic animation amongst archival footage, decades old firsthand accounts and the modern day recollections of survivors and other participating individuals, is a novel one. Whilst watching the film one quickly recognizes how those animated scenes are purely re-enactments. Something which plays to the film’s advantage.

For the most part it works powerfully. We, the audience are led to feel great sympathy for all those involved; and lord knows some of us might be feeling empathy considering the modern day world we live in. Most moving were the acts of courage on that fateful day. One truly stirring moment, shown through footage, would involve the two students who rushed to Claire Wilson’s rescue despite continued gunfire from the sniper. Claire would be one of the first passersby on the ground struck by the sniper’s bullet.

However, roughly half way into the film I couldn’t help feeling a bit confused; wondering where in heck this film was taking us. Sixties period music playing in the background became more harried as the killings began. It was a surreal experience conjuring up memories of the film, Natural Born Killers. Soon thereafter things began to fall more into place as the film took on a more documentary-style feel; almost as if the filmmakers themselves were on to the notion that they needed to bridle in the direction the film had been taking. Despite this minor gripe I feel this was an otherwise well-done documentary.

I would be remiss not to tackle one important subject. Politics. With the exception of winding up the film with mention of a few items the film averts being political in any way. Of the mentions would be the memorial to have been unveiled at the University on August 1, 2016 in honor of the lost and surviving lives. Another refers to the “campus carry” law going into effect in the state of Texas on that very same day. Both taking place on the 50th Anniversary of the shooting.

It’d be hard to imagine most folks walking away from Tower without some thoughts about gun control. Interestingly enough it’s an in-explicitly referenced subject within the film which can play to both sides of the gun debate. Obviously, the sniper’s own actions would strengthen the contention of those wishing to reign in the second amendment. Yet by the same token, there were the many towns folk who after rushing home to get their firearms joined in the crossfire. It’s said that their participation helped stifle the amount of damage caused by the shooter. Although it’s an argument which could probably never be proven and well, these very individuals nearly mistook one of the heroes of the day, who helped in taking down the sniper, as the sniper himself. The fellow nearly got shot in the process.

Today, we live in a world that’s been turned upside down by what would appear to be a constant barrage of violence; happening in places once thought safe. Excluding the many acts carried out in the name of one ideology or another, the examples of mass violence committed out of hatred, revenge and madness are all too numerous. The FBI’s own studies of ‘Active Shooter Incidents’ between 2000 and 2013 indicate an unimaginable continued rise through the years. Something which possibly demonstrates the importance of such a film as this. Who’d have thought half a century ago that this land and the society within would become as twisted and undone as it has.