The Reigning in of Characters at the Crossroads and Beyond

How Andy King, the Times Square Alliance and numerous other figures are vying to regulate the solicitation by costumed individuals. 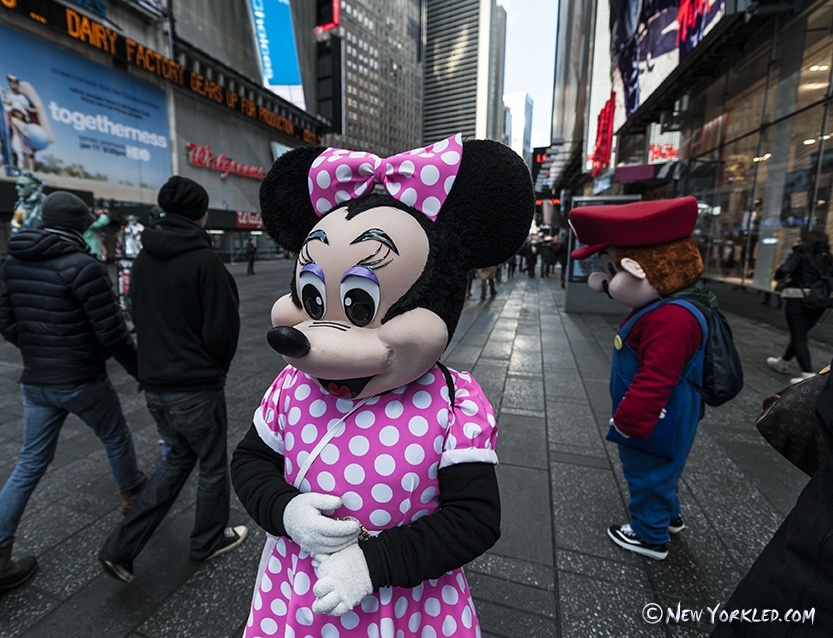 Minnie and Mario at Times Square

Concerned with the ever-growing number of costumed characters in Times Square and beyond plus its impact upon the safety and civility of the area there’s been a movement amongst local government officials as well as the Times Square Alliance to call for the regulation of such activity. Something numerous New York natives, business owners and perhaps even knowing tourists, are happy to hear.

Now don’t get me wrong. I’ve no trouble with folks dressing up in costume. Heck several years ago I’d have thought it really charming. But back then I honestly thought they were official reps for Disney and such. I thought it all cute until one of them came at me asking for money after having quickly taken their photo.

Segue to a year ago. If you had walked through Times Square then you’d have understood there to be a problem. ‘and what might that be? Too many characters in an already crowded section vying for their shot at a passing tourist…or rather I should say competing for tourists to take a shot at/with them…For money of course. Something which honestly has made yours truly sad thinking of how the area’s become so cheapened. However it doesn’t even end there. You’ve now got several versions of the naked cowboy, girls more than half naked resembling show girls and strippers and multitudes of Elmos, Spidermen, Lady Libertii and more.

It’s not like passing through some amusement park with characters freely posing for your photos and having fun with passing folk. These guys and gals are competing to make that buck. There’s nothing wrong with that considering how many people in our beloved city work for that dollar. From the street performer to the person selling books; from the street fair merchant to the food cart operator; this city is a haven for consumerism of all sorts and at all levels. However, if various reports are correct then some of them are doing so in a hostile way; not only with each other; but in some cases with civilians; which again, is not to say that its representative of those in costume as a whole.

With the increased number of costumed individuals in the Times Square area, a number of media outlets have reported on the arrests of persons dressed as the famous “Elmo,” “Cookie Monster,” “Woody” and “Spiderman” characters. In 2012, a person dressed as Spiderman was arrested for allegedly spewing an anti-Semitic diatribe in Central Park. That person was later arrested, for similar behavior, in Times Square.[1] In April of 2013, a man dressed as Cookie Monster was arrested and charged with child endangerment after allegedly pushing a two-year old boy to the ground and yelling at his mother for an insufficient tip.[2] In January of 2014, another person dressed as Woody from “Toy Story” was arrested and charged with forcible touching and sex abuse.[3] In July of 2014, a man dressed as Spiderman was arrested for allegedly punching a police officer who claimed that the costumed individual was aggressively soliciting by demanding a large tip from a female pedestrian.[4] More recently, on Tuesday, September 16, 2014, a woman dressed as Elmo was arrested and charged with aggressive solicitation after demanding tips from plainclothes police officers.[5]

The bill which was headed by Adam King of Bronx District 12 and numerous fellow Council Members would entail a two year licensing fee of $175 along with the applicant’s fingerprints for the purpose of securing criminal history records. There are of course numerous other details involved in securing a license.

The bill would authorize enforcement of its provisions by authorized officers and employees of the department, NYPD, any department designated by the commissioner, any police or peace officer. Any police officer would be authorized to seize the costume used by an unlicensed costumed individual. Failure to produce a license upon request by an authorized officer would serve as presumptive evidence of unlicensed activity. Unlicensed activity would be a misdemeanor offense punishable by a fine of not less than $100 or more than $1,000, by imprisonment of not more than three months, or by both fine and imprisonment.

Finally, the bill describes penalties for violating any provision of the subchapter created by Intro. 467 or any rule promulgated pursuant to the subchapter as follows:

In addition to criminal penalties, all violations of the subchapter would be subject to a civil penalty returnable to the environmental control board ranging from $100 to $500. Penalties for violations would be assessed per day, and not per violation.

Licenses would be subject to suspension or revocation for fraud, misrepresentation, or false statements contained in the application for the license or any renewal application; four or more violations within a two-year period; failure to answer a summons or notice of violation, appear for a hearing, pay a fine, or civil penalty imposed for violation of the subchapter or other applicable law, or conviction of a misdemeanor under this subchapter.

At that hearing numerous individuals were present including those representing the ‘street artists’ themselves according to court records. One such individual’s testimony went as follows:

Hello my name’s Matthew Shapiro and I’m a staff attorney at the Street Vendor Project at the Urban Justice Center. Our members sell food and merchandise from carts trucks tables all across the city. And we are here today to support our brothers and sisters who work and wear costumes and work next to us in the street. From 13 years of experience we know that NYPD officers will use every chance they get to harass, ticket, evict, and arrest self-employed people who make their living in public space. The police department conduct strict enforcement against vendors every day whether or not there are any complaints for conduct as harmless as keeping your license in your pocket instead of wearing it conspicuously at all times as this bill will now require costumed characters to do. This type of honest mistake will be punished by a fine as high as 500 dollars. Even if they are not guilty there is little our members can do to avoid these penalties. It is their word against the officer’s. Intro 467 has more things wrong with it than I can list. The definitions of costume and solicit are vague and they may not pass constitutional muster.

The bill gives officer full discretion to determine what type of solicitation is aggressive. It’s language is modeled after the most notorious criminal statute on the books, disorderly conduct which the police use to sweep up homeless people, LGBT youth, street musicians, and many other powerless groups. The licensing provision may violate the first amendment. It certainly offends our city’s reputation as a welcoming place for immigrants including those who are undocumented. Apart from the blanket statement that immigration status shall not be used for licensing the bill contains nothing to safeguard an individual’s private information. Personal data can be obtained by federal agencies or large corporations that seek to remove costumed characters from the streets or worse. While getting a license may sound easy we know that often it is not. Under this bill a license may be withheld for unanswered summonses. But often the Environmental Control Board does not allow a person to answer a summons once they have missed a hearing date even if that absence is due to a valid reason like a sick child. And it gets worse. We have had members who lose their wallet or have it stolen and often they must spend a month waiting for DCA to send them a replacement. In the meantime they cannot work. They cannot pay their rent. They cannot support their families. Intro 467’s location restrictions are copied from the vending rules that we know very well. In this context they often make no sense. After all costumed characters do not have tables or carts that might block the public thoroughfare as venders are often accused of doing. In addition the rules are poorly drafted. For example no costumed character shall lean against the side of a building or sit on a park bench. No license holder whether or not they are even in costume can stand within 20 feet of any building entrance. It is clear that costumed characters and their advocates did not participate in this bill’s drafting. So why is Intro 467 being proposed? We know that some of the richest and most powerful corporations in the city have waged a campaign to get the costumed characters removed. It has gone on for many years. You will hear from some of them today. We often fight against these same groups who feel that they have the right to say who is allowed in our streets and public spaces. Please do not do the bidding of these media moguls and real estate executives. We know that there have been a few times when costumed characters misbehaved. We believe that some of these cases have been exaggerated by the corporate media. [beeping] That is not… just a few more seconds. That is not to excuse bad behavior. Anyone who commits a crime should be punished for it and they have been. Times Square is one of the most highly policed areas in the city if not the world. The NYPD should be encouraged to enforce existing laws equally against all people who commit crimes. To the extent they are doing so we commend them. New legislation is not the answer. We should explore ways for police and the costumed characters to work together to keep Times Square safe for everyone. The Street Vendor Project stands ready to assist. Thank you very much.

It is unclear at this moment what exactly will become of this bill but there’ll certainly be an update on this site as to what’s transpired.

Here is a list of related links to articles written elsewhere on the subject.