“THE NORWEGIANS” BY C. DENBY SWANSON RESUMES JANUARY 9, 2014 at the Drilling Company

AT THE DRILLING COMPANY

A play about gangsters–really, really nice ones–and women scorned in Minnesota who aren’t so nice. 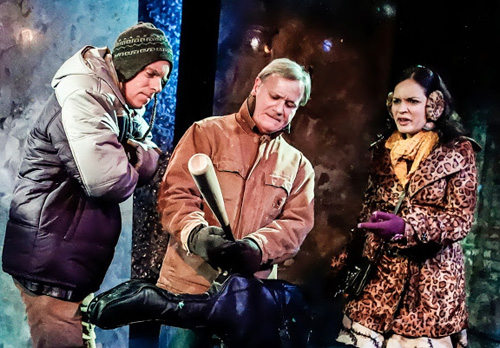 NEW YORK — After a six-week hiatus, “The Norwegians” by C. Denby Swanson will resume Off-Broadway performances on January 9, 2014 at The Drilling Company, 236 West 78th Street.  The production, which began Off-off Broadway last season, has had 75 performances so far.  It played Off-off Broadway from March 8 to April 14, 2013 and re-opened October 3, 2014 on an Off-Broadway contract.  The Off-Broadway run was suspended November 24, 2013 to accommodate a pre-existing commitment for the theater space.  Encouraged by solid audience demand, The Drilling Company has decided to resume the Off-Broadway production January 9, 2014 as an open-ended run.

The play, directed by Elowyn Castle, is a strong, bitter comedy about women scorned in Minnesota and the really, really nice gangsters–Norwegian hit men–they hire to whack their ex-boyfriends. Olive is a transplant from Texas and Betty is a transplant from Kentucky, but neither of them was prepared for the Norwegian men they would fall in love with there: the practical, warm, thoughtful, destructive, evil, jilting kind. If you’re a hit man in Minnesota, 83% of your clients want to take out their ex (Oofda!). Olive has referred Betty to Gus and Tor, a partnership in the whacking business. What Tor doesn’t know is that Gus has been sleeping with the clients. What Olive doesn’t know is that Gus is Betty’s own ex, and she has already put out a hit on him with a Swiss firm. Can Betty call off the job in time to let Gus do his? Should she?

Both audiences and critics have found the play hilarious, but some of its “legs” may be due to it riding a wave of Norwegian entertainment.  “What does the Fox Say” by the Norwegian group Ylvis, is about to pass “Gangnam Style” as the most-watched video of all time.  “Lilyhammer,” the Norwegian-American television series starring Steven Van Zandt about a New York gangster trying to start a new life in Norway, is a solid hit that is now in its second season.

“The Norwegians” is the first outright comedy by C. Denby Swanson, a Texas native. In it, she applies film noir and mob movie genres to life in Minnesota, whose winters she endured for a few years. Her prior plays have mostly been dramedies. The rest just had something funny in them to make the tragedy go down better. (“I tend to write about death,” she says, “you have to put funny in them.”). It’s directed by Elowyn Castle, a seasoned director who played Coriolanus’ ambitious mother, Volumnia, in The Drilling Company’s Shakespeare in the Parking Lot in 2012. The New York Times (Catherine Rampall) described her as “pushy and hard-bitten” in the role of “the Momma Rose of the Roman military” who persuades her reluctant son to run for consul, Rome’s highest office.

Last season, the Drilling Company presented the play’s world premiere Off-off Broadway from March 8 to 24, 2013 and extended the run through April 14 due to popular demand. The New York Times (Anita Gates) cheered the play as an “extremely odd and delightful comedy,” writing, “Karla Hendrick is a scene stealer as Betty, who meets Olive (Ve 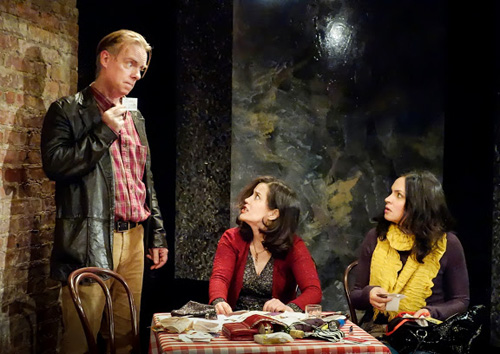 ronica Cruz) in a bar’s restroom. They talk over glasses of wine, and Betty confesses to ordering a hit on an ex-boyfriend and suggests that Olive follow suit. But it is Betty’s deadpan, Mary-Louise Parker-ish delivery while lamenting the horrors of Minnesota winters that kills. Her co-stars do excellent jobs, too. Mr. Clancy and Mr. Teachout finish each other’s sentences as longtime partners in murder. And Ms. Cruz keeps Olive worthy of empathy, even when she feels the ugly power of taking a life.” Adrienne Urbansky wrote in The Easy, “Bottom line: This play succeeds in being immensely funny thanks to a gifted cast as well as a clever script.” Ivanna Culinan wrote in Nytheatre.com, “The Norwegians is a Midwest ride worth taking.”

C. Denby Swanson (Playwright) has had ten works premiered by The Drilling Company, seven of which have been published. Notable among them is “Atomic Farmgirl” (2007), based on the memoir of the same name by Teri Hein, a woman who grew up in the radioactive shadow of Hanford Nuclear Reservation in Washington, watching her father, friends and neighbors suffer disturbingly high levels of thyroid, brain and other cancers. She graduated from Smith College, the National Theatre Institute, and the University of Texas Michener Center for Writers, where she was a fellow in playwriting and screenwriting. She has been a Jerome Fellow, a William Inge Playwright in Residence and a McKnight Advancement Grant recipient. Her work has been commissioned by the Guthrie Theater, 15 Head Theatre Lab (in Minneapolis), Macalester College (in St. Paul), and The Drilling Company and featured in the Southern Playwrights Festival, the Women Playwrights Project, the Lark Theater’s Playwrights Week, PlayLabs, the WPA Festival at Salvage Vanguard, JAW: A Playwrights Festival at Portland Center Stage, and multiple residencies at New York Stage & Film. She won a 2008 Susan Smith Blackburn Special Prize for her short play “The Potato Feast,” which was also nominated for a 2008 New York Innovative Theater Award. Her blues play, Blue Monday,” was developed at ZACH Theatre Center in Austin as part of the NEA/TCG National Theater Residency Program for Playwrights. She is a former Artistic Director of Austin Script Works and on the faculty at Southwestern University in Texas. Her work is published by Smith & Kraus, Heinemann, and Playscripts, Inc.

Elowyn Castle (Director) is Artistic Director of The American Renaissance Theater Company. Her Off-Broadway credits include “The Understanding” for Colleagues’ Theatre Company, “Happy Birthday Wanda June” and “Much Ado About Nothing” for Equity Library Theater. Notable Off-off Broadway proiductions include “Following the Yellow Brick Road…Down the Rabbit Hole” for HERE and “LovePlay” at La MaMa. She has also directed in regional theatera and abroad. For The Drilling Company, she directed “Lewis Black” by Brian Dykstra in the series “Debt” and appeared as Volumnia in “Coriolanus” for Shakespeare in the Parking Lot.

Veronica Cruz (Olive) is a long-time member of The Drilling Company, where she has appeared in nine productions to-date. She played recurring roles on “The Guiding Light” and “One Life to Live,” co-starred on “Person of Interest” and “Third Watch” and guest starred on “Law and Order.” Other theater credits include “The Merry Wives of Windsor” for Shakespeare in the Parking Lot,
“Widows” at 59E59 and “Acts of Mercy” at Rattlestick Theatre.

Karla Hendrick (Betty) is a member of The Drilling Company, where she has appeared in four productions including the Psychiatrist in the acclaimed production of “Reservoir” by Eric Henry Sanders, a re-imagining of Buchner’s “Woyzeck.” In Shakespeare in the Parking Lot, she has appeared in “The Merry Wives of Windsor,” “Hamlet” and “Twelfth Night.” She appears widely in regional theater and is a voiceover artist, audiobook narrator, femme fatale of radio mysteries, studio singer and teaching artist. She graduated from Mount Holyoke (BA), British American Drama Academy, Oxford, and Brooklyn College (MFA).

Dan Teachout (Gus) recently played Trigorin in “The Seagull” at the Drilling Company and appeared in the film “Forged,” (Best Domestic Feature, NY Latino International Film Festival). Off-Broadway he appeared in “Killa Dilla” by Oyamo, directed by Andre De Shields. He has worked with HERE, Cape Fear Regional Theatre and New Jersey Shakespeare Festival, among others, and appeared in eight other productions at The Drilling Company.

Hamilton Clancy (Tor) led the cast in The Drilling Company’s premiere of “Atomic Farmgirl” by C. Denby Swanson. His Off-Broadway credits include “The Retributionists” for Playwrights Horizons and “Dog Logic” for The American Place Theatre. His films include Coen Brothers’ “Burn After Reading,” “Extremely Loud and Incredibly Close” and “American Gangster.” His TV credits include “Third Watch,” “The Unusuals,” “Law and Order: Special Victims Unit,” “The Onion News,” “Days of Our Lives,” “All My Children” and “Life on Mars.” For Shakespeare in the Parking Lot he has appeared as Hamlet, Henry V, Julius Ceasar, Petruchoio and Benedick. He is Artistic Director of The Drilling Company.