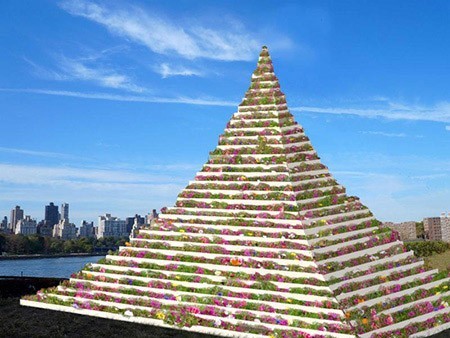 Socrates Sculpture Park is thrilled to announce a major project by New York City-based artist Agnes Denes that will add life to the city’s skyline this spring with a curving pyramid on the park’s East River waterfront in Long Island City, Queens. Titled The Living Pyramid, Denes’s new large-scale, site-specific earthwork will span 30 feet at its four-sided base and ascend 30 feet high, created from several tons of soil and planted grasses.

Commissioned by Socrates Sculpture Park, The Living Pyramid is the artist’s first major public artwork in New York City in three decades since her iconic urban intervention, Wheatfield – A Confrontation in 1982. The Living Pyramid will unite Agnes Denes’s powerful environmental interventions with her ongoing exploration and invention of pyramid structures – a form that has been central to the artist’s practice throughout her long and distinguished career. In the Realm of the Pyramids: The Visual Philosophy of Agnes Denes, the first solo exhibition exclusively devoted to her imaginative investigations of this iconic form, will take place at Leslie Tonkonow Artworks + Projects in New York City from March 14 – May 9, 2015.

For the first time this spring, Agnes Denes’s visual pyramid concepts will be manifested as site-specific, participatory public art at Socrates Sculpture Park. The pyramid’s lifecycle will start in April 2015 when installation begins. As the pyramid progresses, the artist and Socrates invite the public to become part of the installation during a participatory volunteer planting on May 17th from 3 – 6PM, coinciding with the park’s spring opening and New York’s Frieze Art Fair. As tens of thousands of seeds sprout into grasses and wildflowers, The Living Pyramid will continue to grow and evolve, with full assembly and completion this June. It will remain on view through August 30th.