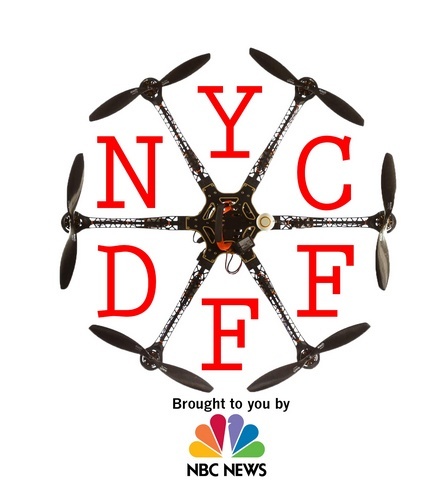 NEW YORK, NY, Mar. 3, 2015 – The 1st Annual New York City Drone Film Festival (NYCDFF) is proud to announce that it will be teaming up with NBC News as the Headline Sponsor of the 2015 festival.

“NBC News is the ideal partner in our pursuit to promote the amazing possibilities of drones for aerial cinematography, news reporting and humanitarian efforts,” said Randy Scott Slavin, the Founder and Director of the festival. “The New York City Drone Film Festival is proud to partner with NBC News.”

The world’s first film festival dedicated exclusively to drone cinema, NYCDFF is a global event showcasing world premieres alongside drone films never before seen on the big screen. NYCDFFsupports and celebrates the creative expression of aerial filmmakers from around the world.

NBC News recently created a viral sensation with its exclusive drone video of a frozen Niagara Falls. To view the video, click here.

The NYCDFF will be held on Saturday, March 7th, 2015 at the Directors Guild of America Theaterlocated at 110 West 57th Street in New York.

NBC News is a global leader in news across all broadcast and digital platforms. Its leading and award-winning television news broadcasts include NBC Nightly News, TODAY, Meet the Press and Dateline, as well as primetime specials and breaking news reports. The rapidly-growing NBC News Digital Group provides continuous content to consumers wherever they are, whenever they want it. NBC News also operates Peacock Productions, an award-winning in-house production company, and the NBC NewsChannel affiliate news service. NBC News is part of the NBCUniversal News Group, a division of NBCUniversal, which is owned by Comcast Corporation.

2020 Rockefeller Center Christmas Tree Viewing Details Released Details were released today concerning the protocols to be used for those people interested in visiting and...