The Finest Hours – A Film Review 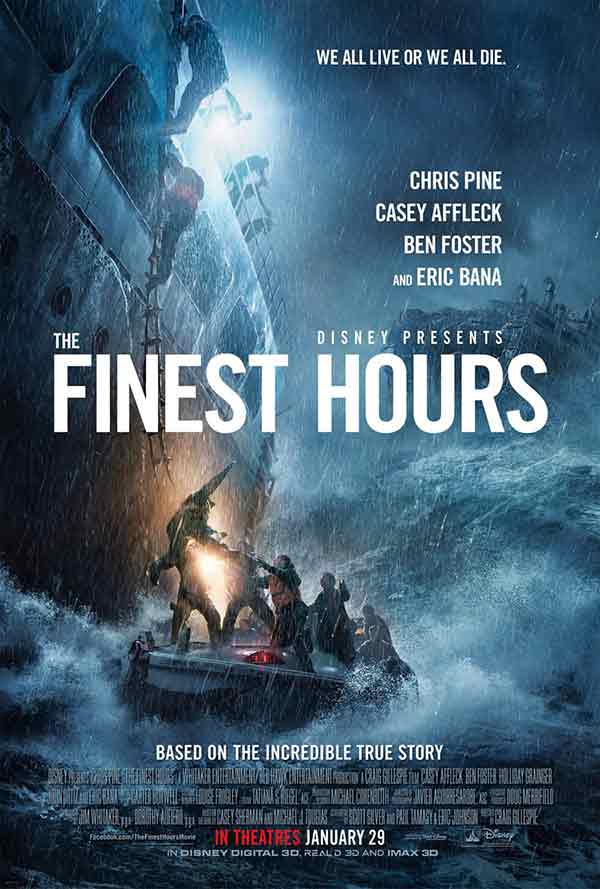 Official Film Synopsis: “On February 18, 1952, a massive nor’easter struck New England, pummeling towns along the Eastern seaboard and wreaking havoc on the ships caught in its deadly path, including the SS Pendleton, a T-2 oil tanker bound for Boston, which was literally ripped in half, trapping more than 30 sailors inside its rapidly-sinking stern. As the senior officer on board, first assistant engineer Ray Sybert (Casey Affleck) soon realizes it is up to him to take charge of the frightened crew and inspire the men to set aside their differences and work together to ride out one of the worst storms to ever hit the East Coast. Meanwhile, as word of the disaster reaches the U.S. Coast Guard station in Chatham, Massachusetts, Warrant Officer Daniel Cluff (Eric Bana) orders a daring operation to rescue the stranded men. Despite overwhelming odds, four men, led by Coast Guard Captain Bernie Webber (Chris Pine), set out in a wooden lifeboat with an ill-equipped engine and little, if any, means of navigation, facing frigid temperatures, 60-foot high waves and hurricane-force winds.”

A true tale about two heroes unaware of how each other’s heroics will come to meet for the sake of saving the lives of many.

A story about humility, perseverance, and greatness. Humility is demonstrated through the two main characters: Bernie Webber, played by Chris Pine and Ray Sybert played by Casey Affleck. Both men absent of ego; standing in stark contrast to those around them.  Men whose tireless determination to save not merely themselves but the many lives of others proving fruitful at the end of the day. It was the sort of greatness that comes about only in the face of great adversity; and believe you me, there was plenty of adversity to go around.

I admittedly choked up at the ending which pulled more than just a few heartstrings. An ending which has been criticized by some as being just as sappy as the film’s beginning. Something I had no problem with whatsoever. Although watching a film like this I’ve always got this one lingering thought going on in the back of my mind. That it’s a Disney film. Funny thing really. I just turned to someone whom I’d watched it with and asked if they go through the same thing? The answer was a resounding yes! Let’s face it, Disney begins their films with their unmistakable trademark intro featuring their castle and fireworks. Something my companion and I feel we could do without. We’d much rather watch the film ignorant of Disney’s involvement. A better way to explain it might be to conjure up the thought of watching a film knowing that a particular typecast actor is going to be in it. It can be hard to get your head around that thought just as it was for us to put aside any expectations of overdone sappiness considering the name that was behind this movie.

Sooooo, did we survive? Yes! We loved it. We felt the story was well told, albeit a little slow at times but truly worth the attention we’d given it. It’s not a film that’ll garner any special awards but then Hollywood’s a mighty strange bird. Heck, a search just now turned up how it’d won the ‘Heartland Film’s  Truly Moving Picture Award. Hmmmm, go figure.

We’d recommend this film as a rental and I personally feel it’s got some “re-watch value”. Check it out should you get the chance.