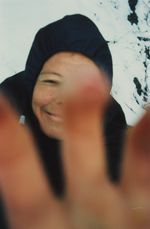 New York, May 2014 – This group exhibition at the Austrian Cultural Forum New York, titled Self-Timer Stories, shows works from the Federal Austrian Photography Collection – situated in the Museum der Moderne Salzburg – in interplay with international positions from the field of extended photography.

The leitmotif of this exhibition is the creation of a self-portrait via self-timer. This practice, popular both in everyday life and in art, reciprocates with technical developments and shows itself in the release cables appearing in the compositions, the digital remote-control release, or the extended hand. In the moment of the camera’s clicking (which is even artificially reproduced in digital photography) the “I as self-timer” becomes prevalent and thus marks the relationship of subject and world, which has always been inseparably linked with the media.

The choice of the medium for publishing self-portraits – mere photography, slide show, or as a book – makes the private matter shown therein public. In contemporary social media intimate and personal matters, which people wish to present and put on display, ultimately are only staged and performed for the camera. The publication of the private, also in autobiographies, harbors a moment of fictionalization.

Therefore, the exhibition demonstrates how discourses on identity and photography in de-fixation mode, which do not necessarily focus on the subjects but rather the relationship between image and gaze, can be used as an emancipatory artistic tool to intervene in visual politics.

The opening reception for Self-Timer Stories will take place on Tuesday, June 17, 2014, from 6PM to 8PM. Admission is free. The exhibition will be accompanied by a supporting program, ranging from performance, and film, to academia:

ABOUT THE AUSTRIAN CULTURAL FORUM

With its architectural landmark building in the heart of Midtown Manhattan, the Austrian Cultural Forum New York hosts more than 200 free events annually and showcases Austrian contemporary art across the board: visual arts, music, performance, film, literature, architecture, and academic thought. The Austrian Cultural Forum houses around 10,000 volumes in its state-of-the-art library, and enjoys long-standing and flourishing partnerships with many venerable cultural and academic institutions throughout New York and the United States.