The Arrival Film Review :: Not all that it could’ve been

The Arrival – Not all that it could’ve been 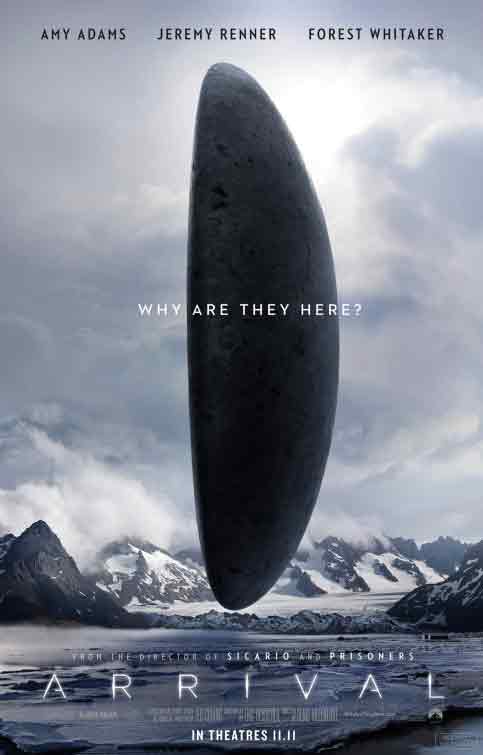 So, where do I begin? Hmmm, how about I share my own gut feelings about, and reactions towards the film.

There are films out there that I’ll watch again and again not simply because they possess a great story but as well because of the acting, direction, special effects and/or cinematography. In some cases merely one of these qualities will suffice in my desire to re-watch the film but more often than not it’s a combination of at least two that will touch me to the point of wishing to re-experience the film over and over. Now, I don’t expect every film displayed across the screen to reach these heights but certainly those films which fail miserably in this respect manage to leave just as lasting an impression as do the ones that impress me.

Where does ‘Arrival’ fit in all this? The Film surely wasn’t abominable, but it was nothing extraordinary either. It could’ve been something so very much more. That, folks comes from the perspective of someone who’s read ‘The Story of Your Life’ prior to and following my viewing. A memorable reading experience deserving of a better interpretation than that served up by ‘Arrival’. It’s purely because of my appreciation for that story that I look forward to re-exploring this film to see what minor details I might have missed out on in my first viewing.

Furthermore, it could very well be because of my having gone into the theater already familiar with the plot’s premise that the experience might’ve been spoiled; but to what degree? Not much I’d think. As mentioned, this film had none of the characteristics worthy, in my opinion, of being lauded as deeply heart touching or brilliant. It neither bore anything in the way of visually stunning cinematography nor anything in the way of Oscar worthy performances. I say that despite my great like for Amy Adams and Jeremy Renner as actors. As for any semblance of brilliance, I feel this film would need to have borrowed more from the original story in order to have reached that level of intellect. Not that intelligence and brilliance necessarily go hand in hand but being a dumbed down version of The Story of Your Life is one of this film’s greatest failings; and therein lies the dilemma as I see it. Dumbed down for the masses I suppose? Dumbed down for the sake of artistic license?

Honestly, I feel this film would’ve been better served as a televised mini-series. Then they could’ve executed a more competent job of explaining all the complicated details of how Amy Adams’ character came to understanding and mastering Heptatod B, that is, the aliens’ written language; and how she came to better understand not only their non-linear approach to thinking and communicating but as well her own transition to becoming a prescient being herself. Might as well toss in her own thinking about the predicament presented between knowing the future and free will. Instead what we got was a muddled explanation of many things which we were expected to blindly accept all squeezed into 116 minutes. Mind you, the story itself is about a two hour read, yet the film adds so much more to the original story in the way of subplots; which are all fine and good, IF they worked. Unfortunately for me, they didn’t. What’s even worse is how folks would need to reference the short story in order to fully understand the film. Epic fail right there methinks.

Somehow Imagine that others who’ve read the story can, to some extent, relate to what I’m saying.

One thing demonstrated by this film is how the story by itself, as it stands, is incomplete in as far as where ‘cinematography as entertainment’ is concerned. There within is one of the beauties of the story. The idea that someone else might come along to reinterpret the story via a multi-part serial. There’s something I’d highly look forward to.

What I will commend the film for doing is visually illustrating for us some of the ideas/images drawn within the short story. After all, use writing to describe a red table situated in a white house underneath a menacing sky and there’s little left to the imagination in the way of straying from the description. However, describe things never before seen (as in the aliens, their ships and the tools used) and it’s left up to the filmmakers to render their own interpretations for us, the viewers. It’s with that in mind that I think fondly of the short story considering how it seemingly stops short of going where it could have with its own telling. Thus paving the way for future filmmakers’ own interpretations.

So folks, that’s it. I could go on all day getting into the intricacies of the short story but maybe I’ll leave that for an altogether separate posting. In the meantime, I highly recommend your seeking out The Story of Your Life by Ted Chiang. It’s readily available online in the form of a pdf file. Just be careful with where you find yourself downloading anything from.