“Old But Not Obsolete” 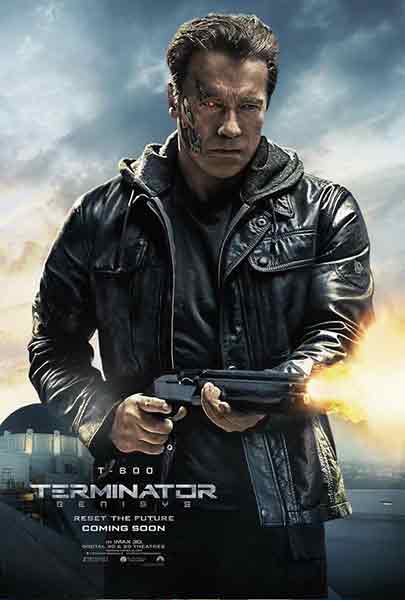 It was Spring of 2015 that I’d caught sight of the new Terminator Genisys trailer and I’d had one of those gut-reaction palm to face responses one might get when a film just about treads into the jump-the-shark territory. Little did I know how wrong I’d be months later after catching the film on the big screen. This film was everything that Terminator’s III & IV should’ve been. In my honest opinion, a true follow-up to the first two films in the series.

The action and special effect sequences were everything you’d expect from any entry into this franchise. The film starts off with what I’d consider one of the most wonderful and credible destructive scenes I’d seen in some time. I can recall only one other time when this story attempted to display the world coming to an end; and that was within Terminator 2: Judgment Day.

What I’d call ‘character personality continuity’ rings true for the two characters, Sarah Connor and the Terminator, for whom I felt it was even important, considering how we knew so little about any other recurring characters to begin with. Although there are those seemingly obligatory yet gratuitous catchphrases we’ve all gotten used to hearing. Honestly, ‘Come with me if you want to live’ and others like it can be rehashed only so many times before they get tired and old.

Regarding the plot…Sitting through the film I found myself rolling my eyes through maybe the first 30 – 40 minutes since the plot didn’t entirely make sense to me but thankfully the film explained itself little by little and the world was made right again. While a viewing of the first two films isn’t 100% necessary, having done so goes an awful long way in understanding and accepting the plot logic and reused plot devices that are thrown your way. It’s this sort of logic which I feel adds to this film’s re-watchability factor; and rewatching it is something I’m looking forward to doing once it becomes available on blu ray.

Now on to some of the actual characters and a slight bit of spoiler fun.

Arnold Schwarzenegger boldly proves he’s ‘Old, but not Obsolete’ through his character and as an actor; although the signs of age are loud and clear as you’ll see for yourself. Comedically speaking he brings about the most comic relief through his occasional facial contortions. His playing of the aged cyborg works extraordinarily and convincingly well. There’s even a scene of a younger version of him as Terminator T-800 which immediately brought to mind ‘The Curious Case of Benjamin Button’. A film which made use of the ‘effects talents’ of hydraulx.com & lolavfx.com but as it turns out I learned from one online article at Entertainment Weekly that it was in fact the magic of MPC that took Mr. Schwarzenegger’s face and placed it on the body of Brett Azar much the way Armie Hammer’s face was duplicated for the sake of his character’s twin in ‘The Social Network’. Regardless, as old as he may be I’d welcome the chance to see him yet again should another installment be in the works; and might I throw in how delightful it was to see him as Sarah’s father figure. In one scene he tells Reese, ‘Take care of my Sara’; and in another, he and Reese are loading weapons in an almost adversarial fashion the way a father might be with his daughter’s boyfriend.

Having been a die-hard fan of the first two films I had a somewhat hard time accepting Emilia Clarke in the role of Sara Connor. Mind you, I saw this film familiar with the names of only two actors who were going to be in it. Heck, mention this actress’ name and no lightbulbs would be going off. But I just couldn’t get over how familiar she looked. Eventually I’d struck gold and realized where I knew her from. Daenerys Targaryen of ‘Game of Thrones’! Yay! Once I figured it out I was then happy with their choice of casting. Despite having seen mention of her supposed bad acting online somewhere, I LIKED HER! Funny how it works aye? Hollywood goes out of its way to star an actor in an important role hoping that actor’s celebrity will translate into box office dollars. Funnier still is how they’ll screw up with the wrong role. Take for example Natalie Dormer, also of ‘Game of Thrones’ who has starred in the Hunger Games’s recent mess of a film, the Mockingjay. I loved this woman in the Game of Thrones but after having seen her in that screwy role I don’t think I’ll ever see her the same way again. I’m just glad they got it right this time with Sarah Connor’s role.

Kyle Reese & John Connor, played by Jai Courtney and Jason Clarke respectively, for me could just as well have been played by any number of actors. Nothing truly stood out for me in the way of their roles and interactions with the rest of the cast. Of course they were important roles for the film itself but I can’t help but wonder how the film might’ve faired with different acting choices. I’ve got to mention how I feel Michael Biehn’s role in the original Terminator as Kyle Reese was truly intense whereas Mr. Courtney’s fell pretty short. If only Mr. Courtney’s portrayal bore the same amount of intensity as Mr. Biehn’s.

John Connor was just as boring as Christian Bale’s in the ‘Salvation’ version. So no love loss here. It’s a role which could just as well have gone to anyone else. Might I throw in how much of a big fan I am of Mr. Bale? But his acting ability and choice of past roles are so great in my opinion that it’d probably take a half dozen bad role choices to get me to dislike him as an actor.

Now here’s one character which had me seriously scratching my head. Throughout the film I kept thinking that this character, played by J. K. Simmons was in fact Dr. Peter Silberman of Terminators I, II & III. After all, he does resemble to some extent the actor, Earl Boen, who’d previously played Silberman; and yes, I know, it says O’Brien, but how often does one pay attention to specific names during a first viewing? Especially with a film containing as many twists and turns as this one does. Honestly it wasn’t until I began writing this review and looked to verify the actual characters’ names that I realized all of this. Until that little revelation I’d felt it was a neat way for the film’s creators to ironically turn one particular item on its head. You see, the first three films in the series had Silberman rejecting any notion of a time traveling cyborg; yet in this installment the tables are turned with O’Brien trying to convince the FBI of what’s really happening. If only the film’s creators had thought to have Mr. Simmons play the doctor in lieu of some character I can’t even remember from previous films. The name doesn’t even show up within the IMDB film listings even though one online source pegs him as a tiny character bit in the very first Terminator. I’ll be re-watching the first two films soon mind you to clear this up in my own head.

Here’s a return to, and an improvement upon, the shape-shifting cyborg idea that originally showed up in Terminator II. Robert Patrick played that instance’s cyborg and Byung-hun Lee played this one’s. Both films had the cyborg masquerading as a cop and both roles could just as well been played by anybody capable of carrying a wooden face throughout the film. Sorry fellas.

Overall, the film was an outstanding return to the universe we loved in the first two chapters. A world involving the original cast of characters in a race for time and/or self preservation. A logic that comes dangerously close to being too convoluted for its own good but manages to pan out nicely. Although, as mentioned, a rewatch or two will be necessary so’s to appreciate any semblance of harmonious flow I believe this film’s capable of. ‘But therein lies the charm: A film I’m actually looking forward to re-watching not once but numerous times again and again.