Squibb Pedestrian Bridge at Brooklyn Bridge Park to Re-Open on May 4, 2020

Squibb Pedestrian Bridge at Brooklyn Bridge Park to Re-Open on May 4, 2020

This week the Brooklyn Bridge Park Conservancy announced how the new Squibb Bridge would re-open to the public on Monday, May 4. It was also announced that the adjoining Squibb Park. located above Pier 1, would also re-open on that same day.

Following would be their email:

We are pleased to announce that construction on Squibb Bridge has been completed, and the new pedestrian bridge will re-open to the public on Monday, May 4, 2020 at 9am. All of us at Brooklyn Bridge Park are excited that Squibb Bridge once again provides vital access from Brooklyn Heights into the Park, via Squibb Park, which will also re-open on Monday. When visiting the Park, and when using the new Squibb Bridge, please observe social distancing standards —  staying at least 6 feet from others — and wear a face covering.

Every year, Brooklyn Bridge Park Conservancy presents over 500 events and activities along the waterfront — from arts and culture, to environmental education classes, fitness, recreation, and more.

The Pedestrian Bridge was first opened in March 2013. The 450 foot walkway was made of wood with steel and concrete supports. It connected the Brooklyn Promenade above with the Pier 1 section of Brooklyn Bridge Park below.

Walking across the bridge one could, at the time, feel a slight bounce with every step, and on windy days, the feeling could be a slight bit disorienting to some. A concern that would be addressed with some re-workings of the structure. After 32 months of closure, it would open once again in April 2017.

In December 2018, it was announced that the bridge would be demolished and fully replaced. Ten months or so later, in October, we would learn of its complete demolition.

With the warmer weather coming up, we’ve some questions about the re-opening. Folks should be feeling pent up in their homes due to the COVID-19 crisis and related social distancing rules. Yet, there’s been much talk about the opening of spaces throughout the city. As well, City Hall has been acting in a prepared way as if anticipating more people in our parks. Today, the Mayor announced how over a quarter million face coverings would be distributed in the city’s parks beginning with this week.

We’ve reached out to park representatives and are still awaiting a response. One of a number of questions on our minds include whether they’ll be prepared for individuals &/or groups wishing to traverse the bridge. Will there be parks personnel at each end of the bridge keeping an eye on things? For the sake of social distancing enforcement? We’ll let you know once a response comes.

Coincidentally, we’ve a tendency to hold onto quite few old emails. Here’s one from July 16, 2018:

We recently completed a routine inspection of Squibb Bridge, and unfortunately, discovered a piece of wood in poor condition. Out of an abundance of caution, we have temporarily closed the bridge while our engineers conduct further analysis. This analysis will fully inform the appropriate repair and associated timeline.

Since Squibb Bridge reopened in the Spring of 2017, it has again become a popular and vital access point to Brooklyn Bridge Park, and we are committed to ensuring that it remains one.

We are working closely with our engineers to reopen the bridge as soon as possible and will provide updates. We appreciate everyone’s patience and understanding. 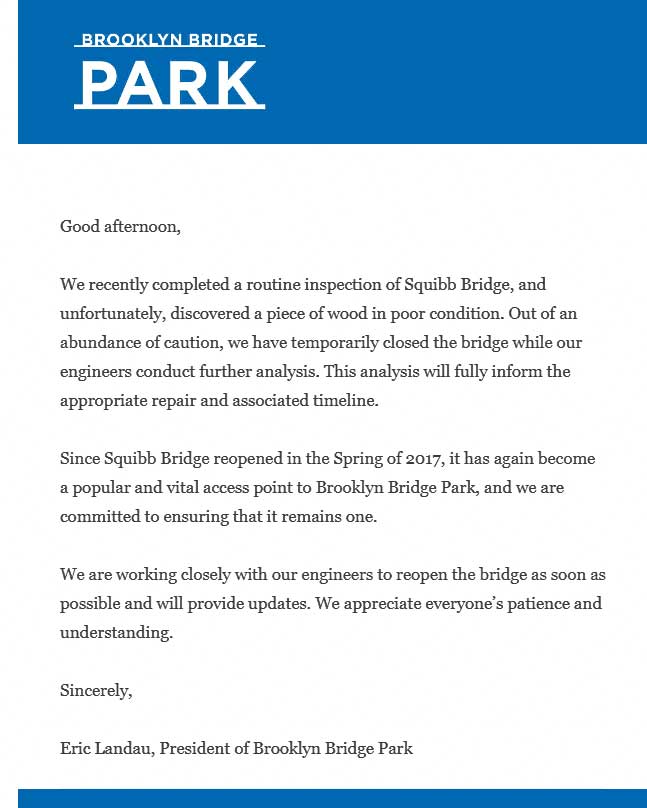