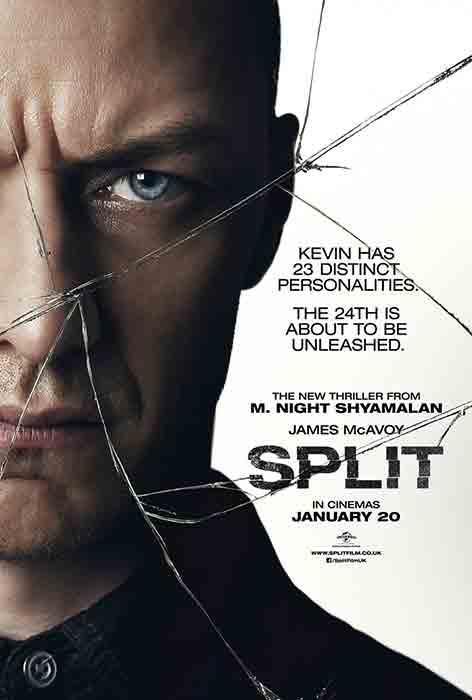 At the time this film Split was released it’d been 17 years since M. Night Shyamalan’s Masterpiece ‘The Sixth Sense’ came to the big screen, and yet another year later that I would set eyes upon it. Relatively speaking he’s had some stumbles along the way. I say stumbles considering some of the works which simply weren’t up to snuff in as far as this person’s concerned; but of course it’s all a matter of perspective and surely there are those out there who might’ve been quite happy with all that he’s thrown to the wind for their viewing pleasures. Certainly one man’s trash is another man’s art.  Far be it for me to act as if I speak for the masses based upon my own dislike for any of his films. Yet, box office numbers, mind you, speak volumes!; as you’ll be able to see in the chart provided below on this page.

The interesting thing is how, based upon his grand work from 17 years ago, someone like myself looks forward to my own perceived redemption on his part; and that comes through in his latest work, ‘Split’. It’s a film starring James McAvoy as the centered villain and kidnapper who suffers from Dissociative Identity Disorder (Multiple Personality Disorder); known to his therapist, Dr. Karen Fletcher (played by Betty Buckley), as a host to 23 personalities. Little does she know, until it’s too late, about the 24th persona coming forth as a literal and figurative beast.

There’s much afoot with these characters which includes as well the surviving one of three kidnapped young girls, Casey Cooke (played by Anya Taylor-Joy); and another most important yet minor role would be that of the uncredited David Dunn (played by Bruce Willis). You’d be forgiven for not recognizing that name. Listening to the soundtrack in the last minutes of ‘Split’ you may come to recognize the tune. It would be the same as that of ‘Unbreakable’ brought to us in the year 2000 and starring Samuel Jackson as Mr. Glass; and so, thus, we’d have Bruce Willis here reprising his role at the very end of this film through a cameo that lasts only seconds. There are merely two words he utters to a nearby restaurant patron, who is reminded about Mr. Glass and asks out loud about his name after seeing the TV reports on James McAvoy’s character and the hell he’d afflicted upon the girls he’d kidnapped.

The girl’s history mind you is brought to us through flashbacks of the supposed sexual abuse she suffered at the hands of her uncle. Something only indirectly hinted at. As with other works by Mr. Shyamalan one need examine the hints cast forth for us. ‘The Sixth Sense’ had plenty of hints paving the way towards understanding and accepting the big twist at the end of the film. Likewise there were hints aplenty in ‘Split’ as to how the final twist could even be possible and what it would actually be. Yet aside from that there’s as well those concerning the girl, Casey Cooke and her uncle. Hints I feel open us up to what might transpire in a sequel; and yes, in fact, there’s new film in the works by the name of ‘Glass’. Why mention all the troubles she’s had with her uncle unless we’re being prepared for the inevitable confrontation with David Dunn? I imagine Dunn initially seeking her out for the sake of learning of McAvoy’s identity and in turn learning of her uncle. Who know, could be the man’s got a history of murdering folks. What comes to mind is Cooke’s own father who supposedly died of a heart attack. Something to which her uncle alluded to “running in the family”. Nevertheless those are purely my hunches and I could very well be wrong.

All and all it’s an extraordinarily well done movie in my opinion. Mr. Shyamalen has truly excelled and matured as a writer and director and I look forward to learning of any connected sequels which might be in the works.

Now on to his box office numbers. As you’ll see in the chart below the man’s done extremely well in consistently turning a profit; with the exception of a film or two. Could it be I’m not alone in hoping for and anticipating his next great work? Mr. Shyamalen has always thought and worked outside the box in his storytelling. He’s proven himself to being in a class of few time and again. Could it be as well the movie studios feel the same way? Again, numbers don’t lie. I’ve a feeling we’ll be seeing a lifetime of films coming from this writer/director.