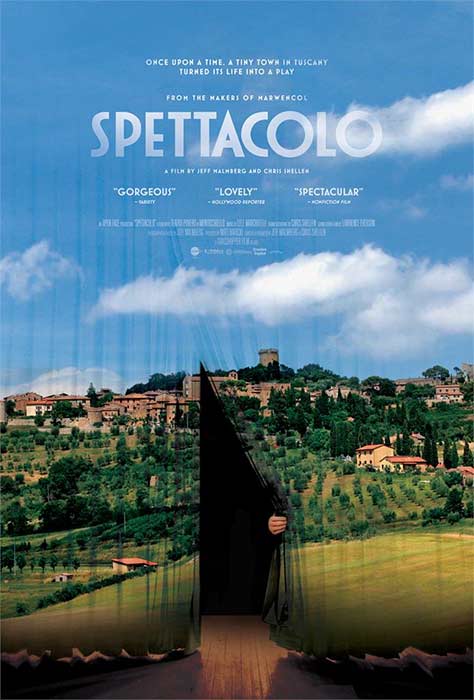 Spettacolo – The Town that Plays Itself

In Italy is a Province of Siena by the name of Monticchiello. It’s a small ancient fortified village with a small population and known for its ‘Teatro Povero’  (Poor Theatre). For over 50 years these folks would put on an open-air Summer theatre production in the public square for folks near and far to visit and enjoy. Spettacolo is their story. One which is wonderfully pensive and as poetic an encounter as it is beautiful. From the filmed vistas of the nearby countryside to the intelligent and reflective conversations and exchanges between the townsfolk it’s all magical!

We first come to know them through the ‘full participation’ stage wherein villagers and members of the theatre company get together for the sake of sharing their thoughts as to the direction they should be taking regarding the next stage production.

This documentary shares with us a bit of their history but mostly centers upon their assembling and preparation of their next play led by Andrea Cresti; one of the originating founders of the entire project. It’s this central coordinating figure with whom we find ourselves spending considerable time with over the bulk of the film. His creative and theatrical mindset brings a great deal of charm to the entire experience. At one point he makes a metaphorical reference to the fennel plant he passes during his drives and associates it with the pace of the work he’s doing for the next production; something he confronts with passion and care. It’s that very emotional connection that translates beautifully to the screen; and in turn, one can’t help feeling enamored with him and the acting troupe as a whole.

Considering how long these people have collectively worked on this sort of theater it’s not hard to imagine how they’ve come about their methodologies for approaching each season; not to mention the use of certain labels they’ve coined. One would be Autodramma (Auto Drama), repeated a number of times during the film, which I was hard-pressed to find an adequate definition for in my own searches; although I had managed to discover its occasional mention wherein acting is concerned. One such find details it as a drama in which the protagonist alone plays all the roles. I suppose that idea gets multiplied ten or twenty fold with all the actors demonstrating through their roles that which is of concern to them collectively. They are all simultaneously individual and whole. Their concerns are internally and externally universal.

I walk away from having seen this work remembering some wonderful exchanges and dialogue.

‘and that right there is the beginning of the telling of the next play. How their world is detrimentally affected by the greed of the international corporate one. The grand antitheses to the Robin Hoods of the world.

There’s a funny bit in their planning of a scene in which they wish to make references about ‘financial mysticism’ and how the banks have replaced the church and commandeered faith, yet they try to tiptoe around the fact that their major theatrical financial support comes from the bank, Montreal dei Paschi. Sadly, they later come to learn how that very bank scandalously becomes guilty of the very things they’ve accused the rest of the financial world of. Such a lesson only brings the point crashing home all the more firmly.

Another worthy mention would be yet other exchanges and declarations:

“The end of the world….
The end of tranquility for most of us
The fear of real poverty that clings to us like death
The end of our rights that are being cancelled
The end of hope
The end of any security”

When I first began watching this great work I wondered about its initial slow pace and whether I’d survive my way to seeing the ending credits. Halfway through I was captivated and by the end I hadn’t wanted it to end.

Spettacolo: Beautifully told and shared; and a cinematic treasure. Thanks go to the filmmakers for bringing it to us as well as the members of ‘Teatro Povero’. Thank you all!

Jeff Malmberg is a documentary director and editor based in Los Angeles. In 2017, his feature documentary SPETTACOLO had it’s world premiere at the 2017 SXSW Film Festival.  The film is supported by a Guggenheim Fellowship and grants from the National Endowment for the Humanities, Sundance Documentary Fund, Creative Capital, and the Tribeca Film Institute. Jeffʼs debut film MARWENCOL won over two dozen awards, including two Independent Spirit Awards, Best Documentary of the Year from Boston Society of Film Critics and Rotten Tomatoes, and the Grand Jury Prize at the 2010 SXSW Film Festival.

Chris Shellen is a writer and filmmaker based in Los Angeles. She produced the award-winning documentary MARWENCOL and co-authored the companion art book “Welcome to Marwencol,” which was named one of the Best Books of 2015 by Amazon.com. She began her career as a film development executive based at a Paramount Pictures, and has worked in documentary, narrative and new media for over 15 years. Her directorial debut SPETTACOLO had it’s world premiere at the 2017 SXSW Film Festival.

The Metropolitan Museum of Art Kicks Off Its 150th-Anniversary Year by Inviting All to Share Their Own Met Stories Met Stories includes a monthly video series and an opportunity...
Read more
Event