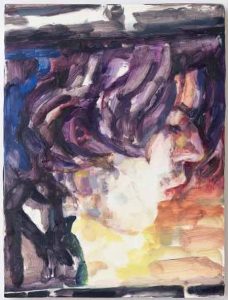 Gladstone 64 is pleased to present SPEED   POWER   TIME   HEART, an exhibition of new paintings by Elizabeth Peyton. This show will be Peyton’s first exhibition with Gladstone Gallery in New York.

“Dark Incandescence,” Peyton’s 2014 exhibition at Gladstone Gallery, Brussels, marked the latter part of a five-year creative interval surveyed in a monograph of the same title forthcoming from Rizzoli. Together with Peyton’s first Gladstone Brussels exhibition in 2009, these two shows serve as bookends to the period chronicled in the publication. “Dark Incandescence” refers to Gustave Flaubert’s writings from Flaubert in Egypt. Kirsty Bell, whose essay is included in the book, observes that Flaubert renders the most ordinary details of bourgeois life extraordinary through his powers of perception and description, which has had a deep impact on Peyton.

Concurrently, Peyton’s exhibition, “Tristan und Isolde,” is on view at the Gallery Met at the Metropolitan Opera through November 26th. Bell writes: “Her work is charged with a vital sense of proximity, regardless of whether the subject is a living face, a photograph, a vase of flowers or the dramatic denouement of Wagner’s Tristan and Isolde. It is all about the present moment. Seen together, however, her work offers a complex meditation on the nature of time and creative potential.”