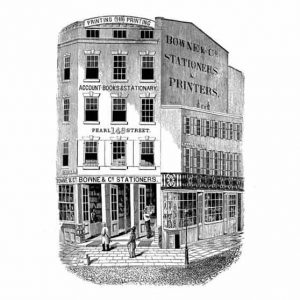 The South Street Seaport Museum announces a new exhibition entitled The Printed Port at the Bowne & Co. Printing Offices. Entry to the new exhibition is included with Museum admission.Tickets are $20 ($14 for seniors and students, children under 8 NOW FREE) and can be purchased atwww.southstreetseaportmuseum.org. The South Street Seaport Museum is located at 12 Fulton Street, New York, NY 10038.

The Printed Port illuminates an industry central to the development of New York City: job printing. Printers were a mammoth force in the 19th-century Port of New York; they produced all manner of printed materials for the businesses flourishing on South Street, including those in the maritime trades. Bowne & Co. founded in 1775 and part of the South Street Seaport Museum since 1975,was one of hundreds of shops that made up  characterized the seaport district. The exhibition features original and reproduced artifacts from the South Street Seaport Museum’s collection, including 19th-century and early-20th century printing presses. A survey of printed ephemera presents the tools and techniques involved in their production. An iron-hand press made by R.Hoe & Co., and part of the Museum’s collection is activated daily, during live demonstrations and workshops hosted by the professional printing staff at Bowne & Co.

Bowne & Co., Stationers, New York’s oldest operating business under the same name. Bowne & Co. was established by Robert Bowne in 1775 and grew as a financial printer throughout the 19th and 20th centuries. In 1975, Bowne & Co. Inc. partnered with the Seaport Museum to open a 19th-century-style print shop at 211 Water Street in the South Street Seaport Historic District.

Included in the price of admission, the South Street Seaport Museum now offers a new level of access to Wavertree, a 134-year-old ship built of riveted wrought iron and the iconic centerpiece of the “Street of Ships” at South Street. For the first time, visitors can take a tour into the belly of the ship to view the breathtaking main cargo area. Tours will be conducted into the massive lower hold space to a viewing platform. Tickets are available athttp://seaportmuseum.org/visit/

Take a 45-minute ride on New York’s last working New York-built wooden tugboat W.O. Decker and see the lower Manhattan skyline like never before.Decker will cruise around the tip of lower Manhattan, giving her riders stunning views of the skyline, Battery Park, Castle Clinton National Monument and river views of One World Trade Center. For the first time since her restoration, Decker will be available for public sails on Saturdays and Sundays beginning May 25. Tours can be booked in advance, $35 with pre-paid museum admission ($29 for seniors and students, $15 for children.) Tickets are available at https://web.ovationtix.com/trs/pr/1011575.

Sail New York Harbor aboard the 1885 schooner Pioneer, an award-winning sail training vessel teaching traditional maritime skills, and the art of tall ship sailing. Visitors can board Pioneer for 2-hour day and evening cruises and 3-hour family ecology sails, May through October. Pioneer offers special sails and programs and is also available for private charter throughout her season.Trips must be booked in advance. Prices including pre-paid museum admission are $42 for a 2-hour sail or $55 or a 3-hour  family ecology sail. Prices not including museum admission are $32 for 2-hour sail or $45 for

Join them for chantey singinging every first Sunday of the month from May to September aboard Wavertree. Purchase of Museum admission required. Clickhere for tickets to the next session on June 2 from 2-4:30pm.

Millions: Migrants and Millionaires aboard the Great Liners, 1900-1914,familiarizes viewers with passenger life aboard ocean liners, the defining differences between travel for wealthy passengers in First Class and immigrants and emigrants  in Third Class, and impact of the greatest period of immigration in American history. Millions is one of the first exhibitions to examine, side-by-side, the dichotomy between First-Class and Third-Class passengers aboard ocean liners in the early 20th century. From 1900 to 1914, nearly 13 million immigrants traveling in Third Class arrived in the United States. During this same period, America’s wealthiest citizens, totaling no more than a hundred thousand passengers each year, traveled to Europe in First Class, spending over $11.5 billion (2017) on luxury vacations. Even though First Class and Third Class sailed on the same ships, their journeys were worlds apart. This exhibition features both original and reproduced artifacts from the South Street Seaport Museum’s permanent collection including ocean liner memorabilia and ephemera, ceramics, and luggage trunks from both immigrants and First-Class passengers. The exhibition highlights a few ship models of New York Harbor working vessels that played critical roles in immigration, including a model of the Museum’s lightship Ambrose (LV-87).

Night at the Museums

Spend the evening visiting museums and historic sites in lower Manhattan, where New York’s history and culture begin! On Tuesday, June 25 from 4-8pm, Bowne & Co., located at 209-211 Water Street, will highlight selected examples that show the breadth and brilliance of 19th-century letterpress printing, as well as demonstrate with equipment not regularly on public view.Night at the Museums is produced by the Downtown Cultural Associationand is part of the River to River Festival 2019, featuring free arts events from June 18 to 29, 2019 throughout Lower Manhattan.

In the days before paved roads, small coastal schooners such as Pioneer were the delivery trucks of their era, carrying various cargoes between coastal communities: lumber and stone from the islands of Maine, brick on the Hudson River, and oyster shell on the Chesapeake Bay. Almost all American cargo sloops and schooners were wood, but because she was built in what was then this country’s center of iron shipbuilding, Pioneer had wrought-iron hull. She was the first of only two cargo sloops built of iron in this country and is the only iron-hulled American merchant sailing vessel still in existence.

By 1930, when new owners moved her from the Delaware River to Massachusetts, she had been fitted with an engine, and was no longer using sails. In 1966 she was substantially rebuilt and turned into a sailing vessel once again. Today she plies the waters of NY Harbor carrying adults and children instead of cargo in her current role as a piece of “living history.”

The 1885 ship Wavertree has a well-documented and fascinating history. Built in Southampton, Great Britain, she circled the globe four times in her career, carrying a wide variety of cargoes. The ship called on New York in 1896, no doubt one of hundreds like her berthed in the city. In 1910, after thirty-five years of sailing, she was caught in a Cape Horn storm that tore down her masts and ended her career as a cargo ship. She was salvaged and used as a floating warehouse and then a sand barge in South America, where the waterfront workers referred to her as “el gran Valero,” the great sailing ship, because even without her masts she was obviously a great windjammer. She was saved by the Seaport Museum in 1968 and towed to New York to become the iconic centerpiece of the “Street of Ships” at South Street. The 134-year-old Wavertree, built of riveted wrought iron, is an archetype of the sailing cargo ships of the latter half of the 19th century that, during the “age of sail,” lined South Street by the dozens, creating a forest of masts from the Battery to the Brooklyn Bridge.

W.O. Decker, the last surviving, New York-built, wooden steam tugboat (later refit with a diesel engine.), was built in 1930 by the Newtown Creek Towing Company and originally named Russell I, after the towing company’s owners. She was renamed W.O. Decker in 1946 after being sold to the Decker family’s Staten Island tugboat firm. The tugboat was donated to the Seaport Museum in 1986 and was refit with a diesel engine. Decker is listed on the National Register of Historic Places and is an exemplary model of the types of steam tugs that were once an abundant sight in New York Harbor. This unique vessel is a true testament to New York City’s maritime heritage, which is a direct factor in the city’s global prominence today.

The South Street Seaport Museum, located in the heart of the South Street Seaport Historic  District in New York City, preserves and interprets the history of New York as a great port city. Founded in 1967, and designated by Congress as America’s National Maritime Museum, the Museum houses an extensive collection of works of art, artifacts, and archival material, a maritime reference library, exhibition galleries and education spaces, working nineteenth century print shops, and an active fleet of historic vessels that all work to tell the story of “Where New York Begins.”