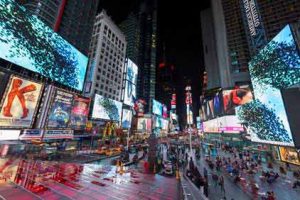 (New York, N.Y.) October 2, 2015—Shahzia Sikander manipulates hundreds of digitally animated drawings to create the idea of swarming, or collective behavior, as an observable phenomenon in Gopi-Contagion, which will be shown on Times Square’s electronic billboards from 11:57 pm to midnight each night in October. This project is a part of Midnight Moment, a monthly presentation by The Times Square Advertising Coalition (TSAC) and Times Square Arts.

Gopi-Contagion consists of flocking particles made up of the silhouettes of hair from the Gopi, female worshipers of the Hindu god, Krishna. Hair from the female figures is then isolated to cultivate new associations. When in motion, the silhouettes looks like insects, birds, bats, or can translate as particles. The flocking reflects behavior of cellular forms that have reached self-organized criticality, resulting in a redistribution of both visual information and experiential memory.

Artist Shahzia Sikander, said, “My process is driven by my interest in exploring and rediscovering cultural and political boundaries, and using that space to create new frameworks for dialogue and visual narrative. In my work, deconstruction is not limited to the miniature-painting format; it extends to the reimagining of historical content and entrenched symbols.”

Sherry Dobbin, Times Square Arts Director, said, “Just when we think that there is no way that these HD screens can surprise us, and artist such as Sikander  reference some of the oldest art forms to make us see the landscape anew.”

Fred Rosenberg, President of the Times Square Advertising Coalition, said, “This piece demonstrates how an artist can take formal mediums such as painting and illustration and make them relevant on our new technology.  Artists like Shahzia Sikander make the best use of how the electronic billboards can bring unusual context to an audience that they would never be able to encounter on their home televisions and computers.”

Harry Coghlan, Chairman of the Times Square Advertising Coalition, said, “Through artists like Sikander, make best use of how the electronic billboards can bring unusual context to the audience that they would never be able to encounter on their home TVs and computers as a break in their programming.”

The following digital screens are participating in the October Midnight Moment:

SHAHZIA SIKANDER Shahzia Sikander earned her MFA from the Rhode Island School of Design.  She was the recipient of the inaugural Medal Of Art by the US State Department in 2012.  She also received the Mac Arthur ‘Genius’ award in 2006.  She currently has solo exhibitions at the Guggenheim Museum, Bilbao and Tufts University, Boston.