At the New York City Center

…’and dealing with the boxes they’ve been thinking outside of. 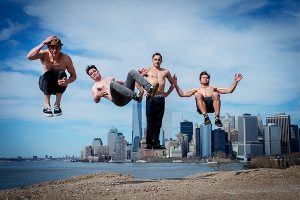 It was in July 2005 that we’d had the great pleasure of witnessing a performance so extraordinary that it had me choking back tears. That show happened to be Varekai by Cirque du Soleil. I’d never had a comparable experience thereafter despite having seen several more performances by the Cirque troupe over the following years; that is, not until now. Thing is, this time it’s the eight death-defying performers from the Montreal-based ‘Les 7 Doigts de la Main’ (‘The 7 Fingers’) who spent roughly 90 minutes entertaining us into cheers, roars, laughs and a well-deserved standing ovation in the end.

For a time after the show I found myself delicately comparing this ensemble with Cirque du Soleil’s; trying to think through which was the better. I then came to realize how Cirque depended not merely on acrobatic performances but as well on stunning costumes, singing performances and story telling. Things which The 7 Fingers do without. All they’ve got are the shirts on their backs, recorded music playing in the background, a microphone and the occasional stage device. Nevertheless their slapstick/humor, energy, timing and supposed improvisations were so wickedly sharp and on target that they had me on the edge of my seat awaiting the next big thrill. Thus in the end I am clearly aware of how ‘The 7 Fingers’ are beyond compare. 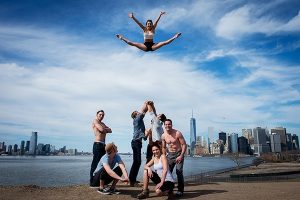 So it is my wish to convey to you something which I feel everyone should experience at least once in their lifetime. It’s my joy to share this. Something you’ll never forget. I still find myself recalling all that was shown to me, bit by bit, sketch by sketch, act by act. The words “brilliant”, “magnificent”, and “stunning” do them no justice!

Thinking about it now as I write this I find those same tears wanting to rush back; not tears of joy but rather tears of inspiration borne from the very passion I’d witnessed on stage. The same tears I choked back as I left the theater virtually 10 feet off the ground.