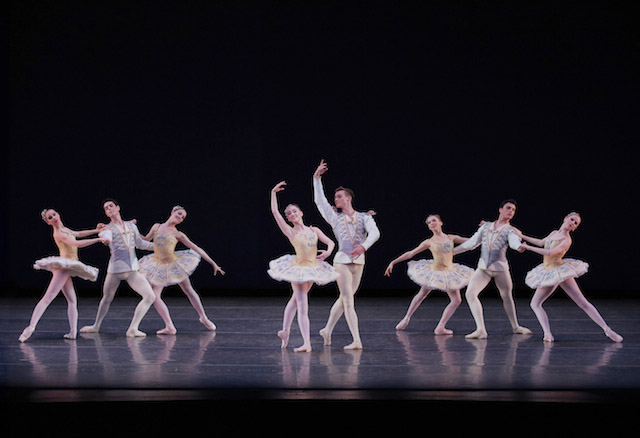 The School of American Ballet will celebrate 50 years of its annual performance tradition at Lincoln Center’s Peter Jay Sharp Theater on Saturday, May 31, (2:00 p.m. and 8:00 p.m.) and Tuesday, June 3,(7:00 p.m. benefit performance).  Students will perform ballets specially chosen to recognize the School’s co-founder George Balanchine and former faculty member Alexandra Danilova, who together launched SAB’s first year-end student Workshop in 1965.  Excerpts from ballets featured in Workshop’s first years—Coppélia (1965)andSwanLake (1966) —along with Balanchine’s Serenade and the fourth movement of his Western Symphony will be performed. As in years past, the performances will once again provide audiences with a unique opportunity to witness the pre-professional debuts of the nation’s most talented ballet students as they prepare to embark on professional ballet careers with notable companies around the U.S. and abroad.

After inviting Alexandra Danilova to join SAB’s faculty in 1964, George Balanchine encouraged her to create a year-end performance showcase for SAB’s advanced students similar to the graduation performances they had experienced together at the ImperialBalletSchool in Russia as teenagers. From humble beginnings (the 1965 show was a shared bill with the West End Symphony and performed in a local junior high school auditorium), the Workshop has evolved into a professionally staged showcase not only for the school’s talented students but also for the interpretive staging skills of SAB’s talented faculty (including most notably Madame Danilova, Stanley Williams, Suki Schorer and Susan Pilarre), and as a laboratory for young choreographers (including John Clifford, Peter Martins, Helgi Tomasson, Christopher Wheeldon and Benjamin Millepied).  Among the scores of notable SAB alumni who have made their pre-professional debuts at SAB’s Workshop are Fernando Bujones, Robert Weiss, Gelsey Kirkland, Merrill Ashley, Lourdes Lopez, Maria Caligari, Ethan Stiefel, Margaret Tracey, Paloma Herrera, Wendy Whelan, Peter Boal, Jock Soto, Darci Kistler, Maria Kowroski, Damian Woetzel, Benjamin Millepied, Ashley Bouder, Sara Mearns, Tiler Peck, Chase Finlay, and Lauren Lovette, among many others.

Highlights of the 2014 program include:

The School of American Ballet, founded by legendary choreographer George Balanchine and Lincoln Kirstein in 1934, is the premier ballet academy in the United States.  Approximately 530 boys and girls ranging in age from six to nineteen attend classes during the Winter Term at SAB, which is both a constituent of LincolnCenter for the Performing Arts and the official school of New York City Ballet. Each year, 20 SAB students on average sign professional contracts with dance companies around the United States and abroad.  Not only do SAB alumni comprise 95 percent of New York City Ballet, but dancers trained at the School also currently appear on the rosters of over 60 U.S. and more than a dozen international companies.