At this point, the above title might sound like an exercise in obviousness since most if not all parades in NYC have big crowds and well, avoiding the formation of large crowds in this age of viral fear might be a foregone conclusion, BUT, we’re not talking about just any parade. It’s the largest, longest and oldest parade of its kind not merely in New York City but as well, in the world…’and so, it’s with both heartfelt sadness and oddly, a strong sense of comfort that we bring the following news:

According to numerous reputable news sources, the 2020 NYC St. Patrick’s Day Parade will be postponed until (a)n, as yet to be revealed, future date. NBC News, WCBS 880 Radio as well as MarketWatch have all made reports citing New York Governor Cuomo’s mention of having discussed the situation with the event’s organizers. Mentioned, was the need to avoid the assembling of the sorts of huge crowds that have historically participated and attended past parades. In response, the organizers agreed and thus, the parade will be postponed.

This all comes on the heels of false reports which came earlier in the day about the cancellation of the parade.

As of the time of this writing on the evening of Wednesday, March 11, 2020 the official site for the St. Patrick’s Day Parade has, as yet, not detailed these updates.

Instead, it still shows the same notes which had gone up on the site recently:

The NYC St. Patrick’s Day parade Inc.™ has been held every year since 1762.
We have received no notice from the authorities about postponement at this point. We recommend checking with your local health officials, government, and where appropriate, your personal physician for guidance. Please see link to CDC and NY State Government below and take special note for those most at risk.

The historic St. Patrick’s Day Parade which has been going on in New York City every year since 1762 attracts hundreds of thousands of participants and millions of spectators. It’s with these massive numbers in mind coupled with the Coronavirus (Covid-19) Urgent Health Concerns that the decision to postpone the parade was arrived at.

On a related note: For days now, NYC Mayor, Bill de Blasio has been reluctant to make any decisions in that regard. 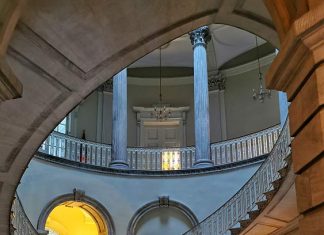