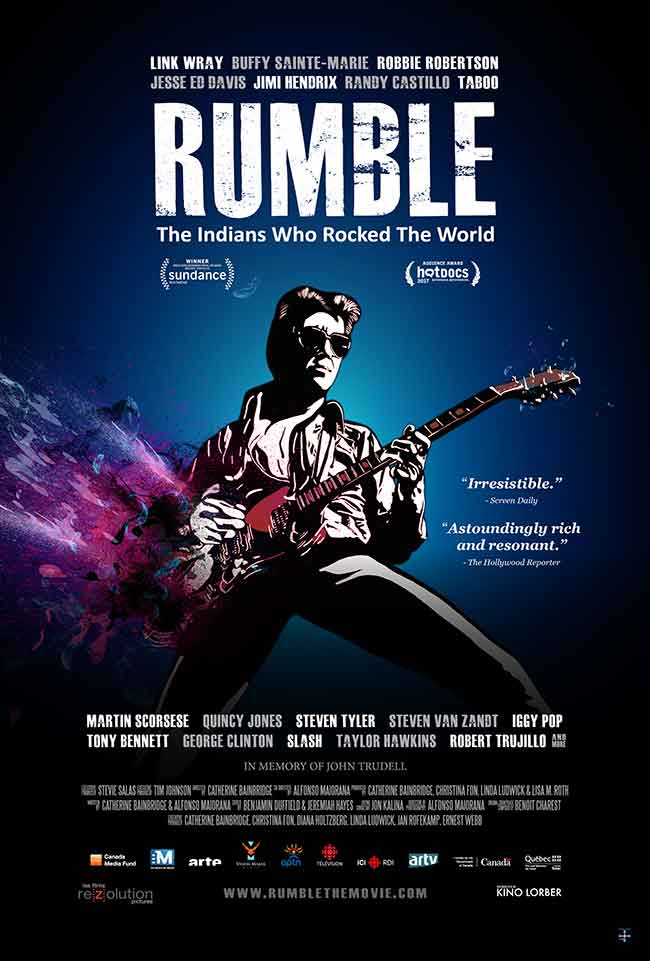 Rumble – The Indians Who Rocked the World

Lord knows I love a good documentary, especially one that makes me want to watch it repeatedly. Rumble is one of those films; one that brings to light the great influences of Native Americans on popular music history!

Told through various perspectives and sources the film takes us on a historical journey from the 1950s back to the times of slavery and forward to the present day. The number of music artists, historians, experts and others featured are many; and include commentary from such big names as Steven Van Zandt, Tony Bennett, Martin Scorsese, Quincy Jones, Marky Ramone amongst others. Yet the real stars of the film are those bearing Native American Heritage whose musical legacies shine brightly; brightly perhaps, only in this film considering how so few of us are aware of how these unsung legends had affected the future of music.

For the first 10 minutes or so the focus is on Link Wray. A man considered to be one of the greatest guitarists of all time who, as of this writing, has never been inducted into the Rock & Roll Hall despite having left his indelible mark upon that very music genre. His first claim to fame came in the way of the namesake, ‘Rumble’; an instrumental recorded by him in 1954 and released in 1958. Interestingly its original name was ‘Oddball’, alas its newly given name, ‘Rumble”, caused stirs and was banned in several US radio markets. Back then, the word was well known for being synonymous with street fighting; and so, one can imagine the alarm bells going off. That is, in light of concerns over Rock’s supposed negative effects upon the youth of that day.

There’s a related video over at Youtube displaying a scene from the film, “The Delicate Delinquent” (1957). Featured within are delinquent-looking young men encountering a suspicious policeman. Playin in the background?; ‘Rumble’. This says it all! Another video shows Mr. Wray performing the tune live in 1974. Some of the comments on that page include: “He was cool before cool was cool”, and “He literally came to kick ass and chew bubble gum”; or as Steve Van Zandt states, Rumble was the “…theme song of juvenile delinquency.”

So you see, Link Wray and ‘Rumble’ were the epitome and embodiment of all that was to come in the way of musical style, approach and heart in as far as Rock was concerned. As some of the interviewed go on to say, a good many artists and bands might not be around if not for him.

We then step back a number of generations. Long before the fear of Rock & Roll there was the persecution of Native Americans on behalf of the US Government. Genocidal acts and bans upon their culture and traditions were the norm. There was much to be likened between these peoples and the tormented and tyrannized African slaves.

Related to this subject is an entry in the Library of Congress detailing the American Indian participation in the abolition of slavery and how some slaves were able to escape to the southern Indian nations of Florida; a state that, at the time, hadn’t yet been acquired by America. One can’t help wonder how far the Native American influence upon the songs of the south and of slavery truly goes.

It’s an amazing thing to listen to and witness the singing of the traditional/indigenous music of the south east, as exhibited in the film, in the way of Ulali, an indigenous vocal group. Pura Fé (Musician & Singer & Writer | Tuscarora / Taino) says, “You can hear the spirit of some of the old music before plantations, slavery … and colonization. People are really shocked when they hear the traditional music of the south east. They’re like, that’s Indian music? I thought that was African music.” Mind you, a search for Ulali reveals one definition: “Ulali’s sound encompasses an array of indigenous music including Southeast United States choral singing (pre-blues and gospel)”. The resemblances between Gospel and their sound are unmistakable.

Looking back at the earlier artists brings to mind something I’d grown up with. That is, the memory of various Rock stars and groups who’ve cited Rhythm and Blues as being the dominating influence in their creative processes. I wonder, in turn, how much of an influence did Native American artists have upon Rhythm & Blues itself. It’s something this documentary touches upon repeatedly yet without a concrete answer. Regardless, that doesn’t matter. What’s important is that which lies at the heart of this film. The unrecognized influences of Native Americans upon the music which we all thought we knew. I learned quite a bit which I may never have otherwise known, and you just might, as well.

Big thanks go to those involved in the making of ‘Rumble’. I look forward to seeing it again and I highly recommend it!