Rodin at the MET – Exhibition Plus Photos

Rodin at the MET – Exhibition

Surrounding the sculptures on display, are numerous paintings from artists who’ve had an influence upon Rodin’s life as an artist. The works to be found within are part of the museum’s permanent collection.

Of the many pieces from Rodin are some of his most renowned; some of which one can find within the image gallery located further down on this page. 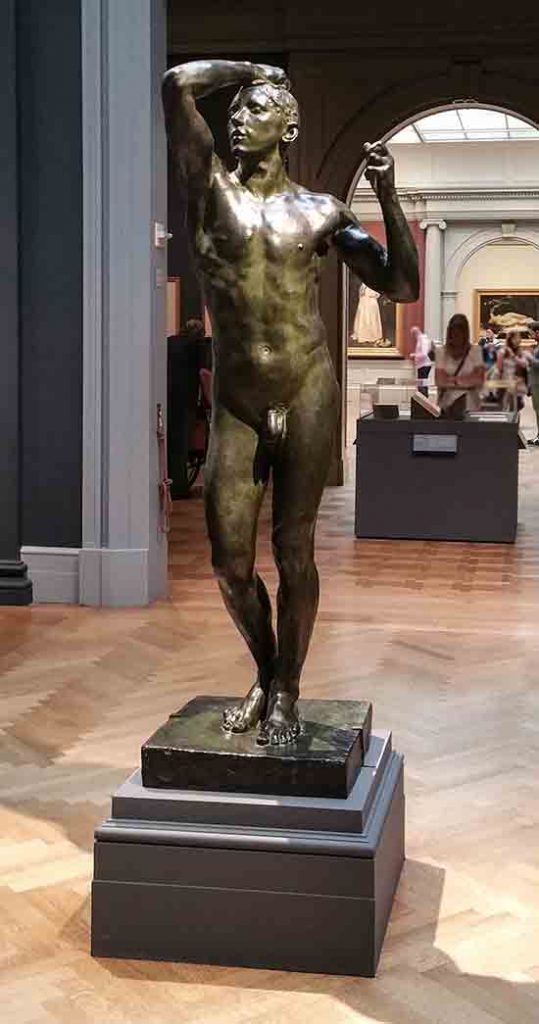 One most notable one would be The Age of Bronze, centered within the gallery hall; modeled 1876, cast ca. 1906 by Rodin. The placard reads: Rodin’s breakout sculpture, The Age of Bronze caused a critical scandal for its extreme naturalism and ambiguous subject matter. Fashioned over a period of eighteen months and based on a live model, the sculpture depicts a suspended moment of human awakening, either to suffering or to joy. First exhibited in 1877 in Brussels with the title The Conquered Man, it was displayed later the same year in Paris with its current title. Rodin promoted the work’s multiple interpretations, saying, “There are at least four figures in it.”

Relatedly speaking would be how we’ve stumbled upon a reproduction of this sculpture at the de Young & Legion of Honor Museum in San Francisco as well as that of The Thinker and others.

Not to be excluded would be his Adam and Eve sculptures found at one end of the hall situated on either side of an entrance; perhaps a nod to how the artist had intended to flank the monumental doorway, the Gates of Hell, pieces from which can be found behind a glass enclosure. The Gates of Hell, would be a pair of bronze doors originally meant for the Decorative Arts Museum in Paris which was never completed. The work itself was inspired by Dante Alighieri’s poem, The Divine Comedy.

Yet another most important item would be The Thinker. It’s placard:

The Thinker was made to sit over the lintel of Rodin’s monumental bronze doorway, The Gates of Hell, contemplating the fate of the damned. Independent bronzes of The Thinker became popular, especially among American patrons. Thomas Fortune Ryan, principal founder of the Rodin collection at The Met, commissioned this cast from the sculpture’s studio.

In a real sense, The Thinker is Rodin. Brutishly muscled yet engrossed in thought, coiled in tension yet loose in repose, the sculpture, according to one early twentieth-century critic, embodies both “dream and action”

Just some of the artists’ works hanging off the walls, of which most if not all are oils on canvas) are the following:

The last item there on the list has an adjoining placard that reads as so:

In August 1910 MacCameron noted in his journal that he had visited “Rodin, the greatest of sculptures– he is a charming person — a splendid big head, with light grey warm creamy hair and bear…. I am [interested] in the idea of painting a good portrait of [him].” The likeness, completed by late September, shows the sculptor holding a model of his iconic work The Thinker, a bronze of which is displayed in this gallery. Rodin and MacCameron discussed sending the portrait to The Met, but it traveled instead to New York’s National Academy of Design and Pittsburgh’s Carnegie Institute. Collector and financial J. Pierpont Morgan acquired it and, in 1912 he gave it to the Met, where it hung in a new gallery dedicated to Rodin.

Found at the center would be the Introductory placard:

In 1912 The Met inaugurated a gallery devoted to the great French sculptor Auguste Rodin (1840-1917). The first long-term installation at the Museum dedicated to a living artist, it was applauded by the press for showing a “collection of unique importance.” Interviewed in Paris, Rodin pronounced himself immensely pleased by the room, because it was visited “by many working people, by artists and students.” He donated a number of pieces from his studio to mark the occasion.

On the centenary of Rodin’s death, this exhibition celebrates The Met’s historic engagement with the artist. Two galleries display a selection of his work that represents more than a century of acquisitions. The objects on view range from sculptures and drawings how in 1912 to more recent and equally transformational gifts from Iris and B. Gerald Cantor, passionate Rodin collectors and philanthropists, and the Cantor Foundation.

The sculptures in this gallery reveal Rodin’s ardent, enduring exploration of the human figure as he strove, in his words, to “imitate not only form, but life.” The bronzes, marbles, terracottas, and plasters are juxtaposed with paintings by Rodin’s contemporaries that evoke the context that shaped the sculptor’s career: his complex relationship with the establishment, his wide-ranging professional friendships, and the international renown that he achieved at the turn of the century.

There is no defined path through the exhibition; visitors are invited to choose any work as a point of departure to explore Rodin at the Met.

Here’s an image gallery of photos taken at the exhibition: