Review of the Spheres Interactive VR Experience at Rockefeller Center® 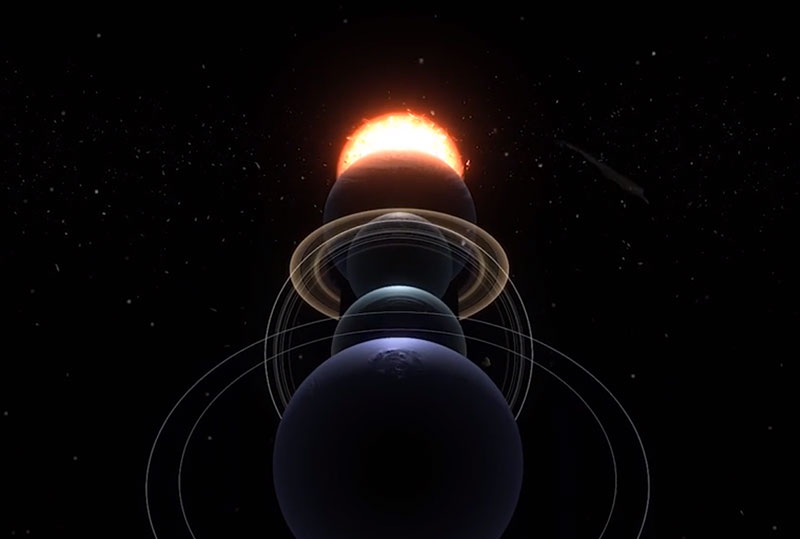 Review of the Spheres Interactive VR Experience at Rockefeller Center®

The following is my impression of Spheres after having experienced it on the eve of its opening at Rockefeller Center.

I’m led into a dark room with Oculus Rifts hanging at or about six feet above ground positioned maybe 10 feet or less from each other. After a brief one on one introduction on making the best of my experience I strap on a headset and begin my journey.

Made up of three individual films or, rather, three 360 degree interactive 3-dimensional adventures through space, the entire undertaking lasted roughly 40 minutes or less for me. In as far as comfort’s concerned, short of the one or two moments I nearly lost my balance, I never really felt uncomfortable. Although I can easily imagine weak stomached individuals or those prone to motion sickness having quite a problem with this all. Speaking of comfort, I’d be wrong to not mention the lack of true clarity. I wear glasses and, as one might imagine, you can’t wear them under the headset, or at least I was discouraged from even trying. The levers on the set which supposedly clear things up didn’t do very much in clarifying my view, although the third section of the experience was the clearest of the the three. Now don’t get me wrong, the lack of true clarity didn’t entirely ruin the experience. I was able to get enough in to say that I enjoyed the whole endeavor but for $50 I expect near perfection in the delivery process.

If you can get past that little gripe of mine then you’ll surely get a kick out of traveling amongst the stars whilst coming across a black hole, a few galaxies and the planets of our solar system. My own favorite portions involved was racing along Saturn’s rings and peaking inside Earth’s innards. Yet, in the end, the big question revolves around whether it’s all worth fifty bucks. I say it isn’t.

But, did you know you can own the whole experience for $9.99? Yep! There’s a page online selling it for that price here…  Of course you’d need your own headset but if you’ve got that then you’re all set! 😉 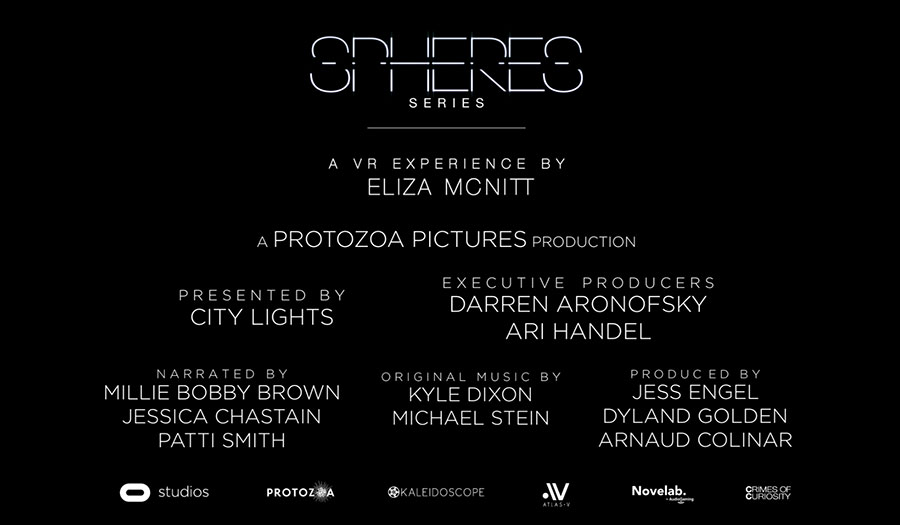 Scored by Grammy-nominated musicians Kyle Dixon and Michael Stein of SURVIVE (Stranger Things), SPHERES broke ground at the 2018 Sundance film festival when it sold to City Lights in a historic 7-figure deal. From there, the series went on to premiere at Tribeca, before winning the Lion at the 2018 Venice Film Festival.

SPHERES is a three-chapter virtual reality journey to uncover the hidden songs of the cosmos. Space is not silent. In fact it is full of sound. For thousands of years we’ve looked to the stars to find our place in the Universe, but for the first time we listen to its music.

Chapter I: Chorus of the Cosmos Planet Earth sings. In this interactive VR experience, we discover the Universe through sound. Our solar system becomes an instrument and we listen to its music. Narrated by Millie Bobby Brown.

Chapter II: Songs of Spacetime Dive into the heart of a black hole to uncover the breakthrough discovery of gravitational waves. Fall into the darkness, and you will find the light. Narrated by Jessica Chastain.

Chapter III: Pale Blue Dot The Big Bang was silent. Then came sound. Journey from the edge of the cosmos to uncover the strangest song of all. Narrated by Patti Smith.

Space is not silent. In fact it’s full of sound. For thousands of years we’ve looked to the stars to find our place in the Universe, but for the first time we listen to its music. SPHERES is a three chapter journey through the hidden songs of the cosmos.

Telescopes are time machines that allow us to travel back billions of years in cosmic time. They show is spectacular images that have expanded our imaginations. But, a world of mystery shrouded in darkness awaits. Using sound, we can research these invisible worlds where light cannot travel and our tools cannot see.

As a filmmaker, I am fascinated by the interdisciplinary dance of science and art. From astronauts to astrophysicists, I have worked alongside scientists to tell stories about the human connection to the cosmos. SPHERES is a celestial experience where you become the cosmos. In this interactive VR journey, the breakthrough discovery of gravitational waves transforms how we see the Universe.

My fear of black holes dared me to venture inside. Past the event horizon, awaits strange things. We send you on a journey, to realms where the laws of space and time no longer apply. This medium was the only way to truly make audiences feel as if they were plunging into a black hole or traveling back in time to the earliest moments of the Universe.

The Big Bang ignites the expansion of space. But the beginning of the Universe is silent. Sound doesn’t form until 400,000 years after. In this layer of the Universe known as the Cosmic Microwave Background we hear the very first echoes of the Big Bang. Planets, stars, even these ancient corners of the cosmos create sound. Through their voices they tell us the story of how the Universe came to be.

We uncover that humans play a significant role in this journey because we are observers of all these songs. And as far as we know—for now—we are the only ones who listen to the music of the spheres. Fall into the darkness and you will find the light