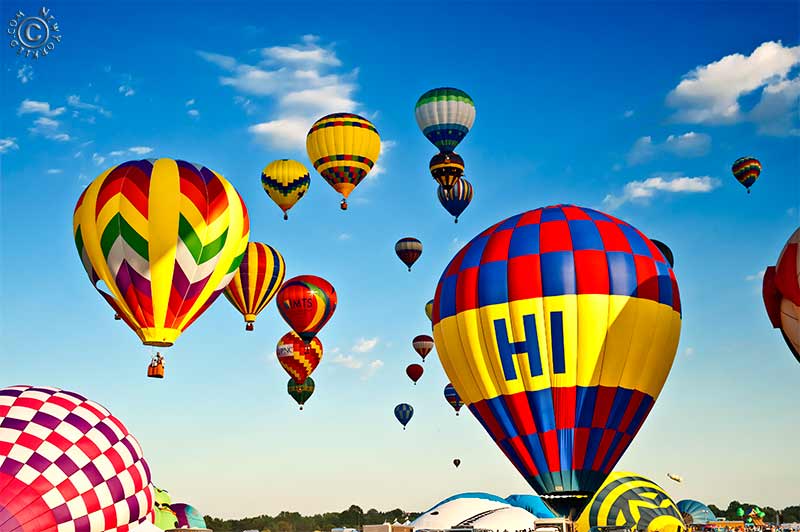 ** All balloon activity is wind and weather permitted **

Visit as well our Balloon Photo Gallery to see the huge collection of photos taken over the years!

Children ages 3 and under: free

Visit this page to learn more about ticket sales and prices

A fireworks display, a nighttime balloon glow where balloons and inflated and lit up like giant lanterns; an extreme trampoline show; age-appropriate entertainment includes magicians and performers; the PNC Mobile Learning Center; interactive exhibits from leading consumer brands; a walk-through balloon to be explored; and of course the children’s featured concert with Dan Zanes + Claudia Eliaza.

Available at all QuickChek store locations, by calling 1-800-HOT-AIR9 or online at www.balloonfestival.com.

A portion of the proceeds benefits the Children’s Miracle Network

The Festival is the premier family entertainment event in the Northeastern United States and features 39 hours of affordable, non-stop, morning-through-night attractions including 5 scheduled mass hot air balloon ascensions with up to 100 sport and special shaped balloons from around the world; live concerts; a fireworks extravaganza; a nighttime hot air balloon glow where balloons are lit up like lanterns; the Quick Chek Hospitality Tent with age-appropriate children’s activities and entertainment; ‘and plenty more.

After selling two and a half million albums, 13 million singles, and racking up over a 1.75 billion combined streams of their songs, the story of Kimberly, Reid, and Neil Perry is again evolving in incredible new ways.

Since releasing their groundbreaking crossover #1 single “If I Die Young” in 2010 (with its current sextuple-platinum status and 160 million video views), The Band Perry have forged a unique, genre-defying identity and built an international fan base leading to sold-out world tours, five No. 1 Singles on the Billboard Country Chart, a No. 1 single on the Hot Adult Contemporary charts, six songs reaching gold or platinum status, and in 2015, bringing home their first Grammy® Award.

Their track “Live Forever was the official theme song for Team USA at the 2016 Summer Olympics in Rio.

“We’re very excited to announce The Band Perry, who is crossing over to contemporary and pop while still playing their greatest country hits, as our Saturday night concert headliner,” said Festival Executive Producer Howard Freeman. “We’re proud to present a diverse lineup over the course of our three-day Festival weekend. The Band Perry will be a great fit with our younger, millennial-oriented audience on Saturday.”

Known for their boundary-pushing live performances, the band’s combination of music, fashion, and visual art has become a hallmark of their dialogue with their fans and with culture. Their creative efforts boast collaborations with artistic luminaries such as Steven Klein, Nicola Formichetti, and Neil Krug. Even with the extraordinary musical and visual concepts they’ve introduced in their career thus far, the next era promises to see the band expanding these boundaries yet again.

Most excitingly, The Band Perry recently released a highly-anticipated new collection of five songs titled COORDINATES, which has received overwhelming acclaim from fans. The collection sees music industry icon Rick Rubin serving as executive producer. The band wrote and produced the songs themselves via their ARTRAT creative house and production collective.

READINGTON, NJ — The skies over Central Jersey will soon be filled with balloons, and there’s one guaranteed to outshine them all.

The QuickChek New Jersey Festival of Ballooning in Association with PNC Bank has announced that an 11-story tall flying lighthouse will be the signature special shaped balloon for this year’s festival, lighting the way for the largest summertime hot air balloon and music festival in North America. The three-day Festival takes off July 26-27-28, 2019 from Solberg Airport in Readington, NJ.

“Lighthouses are a great representation of summer here in New Jersey and the QuickChek Flighthouse balloon will be a great representation for this year’s magic of ballooning,” said Festival Executive Producer Howard Freeman. “We have our greatest lineup of special shaped balloons and our best concert lineup ever, so as you head out for the holiday weekend, make QuickChek your Summer Sub, fresh brewed iced coffee and Festival ticket destination. You’ll enjoy great savings on all three!”

“People love and adore lighthouses, it’s a universal sign of security and like America, it’s always there to protect,” said hot air balloon pilot Barry DiLibero of Chester Springs, PA, who built the 11-story tall, red, white and blue balloon in 2006. “I had always wanted one and people just feel good about them. We’re looking forward to providing that warm feeling and experience for everyone at the festival.”

Complete with sea gulls near the “light” at the top, this special shaped hot air balloon is a majestic 115 feet tall, 53 feet wide at the bottom and weighs 440 pounds.

Returning favorite balloons include the 5-story-tall PNC American Flag, the 92-foot-tall Simba the Lion, a 110-foot-tall panda from Unique Photo, a 105-foot-tall white bear from Bimbo Bakeries USA, and the 80-foot-tall Pepsi football.

Festival-goers can now save up to $11 off the gate price at any QuickChek store with no fees. You can enjoy additional savings during QuickChek’s “Summer Sub Days” as select 6-inch sub sandwiches are just $3 and select 12-inch supreme sandwich baguettes are just $6.

Download the QuickChek mobile app to receive an additional $2 savings on Festival tickets through July 24. To locate the nearest QuickChek store visit www.quickchek.com; to learn more about this year’s Festival visit www.balloonfestival.com.

READINGTON, NJ — The QuickChek New Jersey Festival of Ballooning in Association with PNC Bank celebrates its 35th anniversary with its biggest lineup of special shaped balloons and its biggest live concert series ever when the three-day festival takes off July 28-29-30, 2017 at Solberg Airport in Readington, NJ.

The largest summertime hot air balloon and music festival in North America will launch 11 special shaped hot air balloons among the 100 balloons that will take to the skies twice each day in mass ascensions over the scenic Hunterdon County countryside. This year’s live concert series features five headliners headed by the legendary Pat Benatar.

Tickets go on sale at all 149 QuickChek fresh convenience market store locations throughout New Jersey, the Hudson Valley and Long Island starting Friday, May 26. Festival-goers can purchase advance tickets in stores and save 43% off the gate price for adults, save 47% on children’s tickets ages 4-12, and no matter what time you go into a store you can enjoy additional savings during QuickChek’s “All Day Lunch” as all 6-inch subs are just $3 all day long.

Download the QuickChek mobile app to find the nearest store where you can receive an additional $2 savings on festival tickets through July 26.

And there’s a lot of excitement about the Festival’s biggest concert lineup ever with two concerts Friday, July 28; two Saturday, July 29 and one on Sunday, July 30 on the Progressive Main Stage.

“Whether you have come in the past or you’ve always wanted to but haven’t made it out, this is the year to be here with our greatest lineup of special shaped balloons and our biggest concert series ever,” said Festival Executive Producer Howard Freeman.

“We are thrilled to continue to sponsor this great family festival and the biggest party of the summer,” said QuickChek CEO Dean Durling, whose Whitehouse Station, NJ-based company has been the Festival’s title sponsor for 25 years and is the exclusive retail outlet for the event.

As part of the Festival’s and QuickChek’s ongoing commitment to giving back to its communities, the Festival has raised more than $2.6 million for local charities and non-profit groups including the Children’s Miracle Network in the past 24 years.