The North American Premiere of 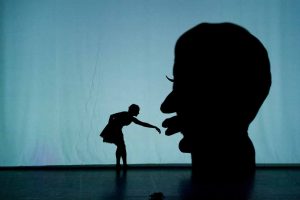 “Shadowland mixes elements of vaudeville and theater, acrobatics and dance, poetry and pop into a gorgeous work of art.” — Berliner Morgenpost

Pilobolus’s Shadowland is an euphoric mix of shadow-theater, dance, circus, and rock concert.  The surreal and gripping story of a girl’s coming of age takes audiences on an eye-popping thrill ride, and features a world-premiere finale that plays tribute to New York City.

Shadowland begins at bedtime, as an adolescent girl prepares for sleep and longs to be grown up. She soon finds herself trapped in a distorted dream world in which she meets phantasmagoric animals, freaks, and monsters, all created by a cast of Pilobolus performers who miraculously transform their bodies into unimaginable shapes and figures.  Following the twisted path of adolescence itself through encounters that are at once comic, threatening, seductive, and transformative, Shadowland celebrates the strange power of dreams to reveal who we’re born to be.

Shadowland combines Pilobolus’s legendary choreographic approach to partnering and its inimitable inventiveness with the style of shadow-theater that the company first developed for the 79th Academy Awards. It was created in collaboration with indie rock songwriter, composer and singer David Poe and with Steven Banks, playwright, actor, musician and head writer for “SpongeBob SquarePants.”  The show is currently playing to sold-out houses across Europe, the Middle East, Australia, Asia, and South America. 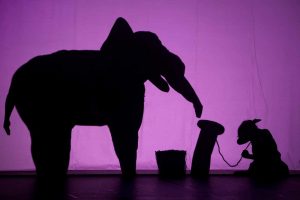 Pilobolus is an internationally acclaimed collective, renowned for its unique, diverse collaborations that ignore preconceived barriers between creative disciplines. The company is committed to constantly making things, always creating collaboratively, and always exploring ways of using the human body as a graphic and expressive medium. Pilobolus was founded in 1971 by a group of Dartmouth College students with no training in dance and no interest in playing by the rules. They employed an inventive naïveté that the contemporary “Pilobolus 2.0” energetically applies to the diversity of opportunities in today’s world.  The company puts its intense creative energy into action in the communities where it performs, teaching groups of people of all ages, backgrounds, and abilities new ways of thinking independently, forming genuine human connection, working collaboratively, and finding beauty in unexpected places.

Pilobolus has created and toured over 120 pieces of repertory to more than 65 countries, and currently performs its work for over 300,000 people across the U.S. and around the world each year. Pilobolus was featured around the world on the “79th Annual Academy Awards Broadcast,“ and on “60 Minutes,” “Sesame Street,” “Oprah,” “Ellen” and “Late Night with Conan O’ Brien.” Pilobolus has been recognized with many prestigious honors, including a Scripps Award in 2000, a Dance Magazine Award in 2010, a TED Fellowship, a 2010 Grammy® Award Nomination, and several Cannes Lion Awards at the International Festival of Creativity. In 2015, Pilobolus was named one of Dance Heritage Coalition’s “Irreplaceable Dance Treasures.”

NYU Skirball Center for the Performing Arts is the premier venue for the presentation of cultural and performing arts events for New York University and lower Manhattan. Led by Executive Director Michael Harrington, the NYU Skirball mission is to showcase and support diverse and eclectic talent from around the world, while cultivating audiences for live performance through deeper engagement opportunities. For more information visit: www.nyuskirball.org.

*There will be a pre-show talk before the afternoon performance

**There will be a post-show discussion following these performances