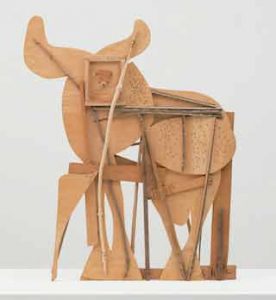 Picasso Sculpture is a sweeping survey of Pablo Picasso’s profoundly innovative and influential work in three dimensions. The largest museum exhibition of Picasso’s sculptures to take place in the United States in nearly half a century, the exhibition brings together around 150 sculptures from Picasso’s entire career via loans from major public and private collections in the U.S. and abroad, with the largest selection of works coming from the Musée national Picasso–Paris. With many works on view for the first time in the U.S., the exhibition provides an opportunity to explore a rarely seen aspect of Picasso’s large and prolific career. MoMA is the sole venue.

Over the course of his long career, Picasso devoted himself to sculpture wholeheartedly, if episodically, using both traditional and unconventional materials and techniques. Unlike painting, in which he was formally trained and through which he made his living, sculpture occupied a uniquely personal and experimental status in Picasso’s oeuvre. He approached the medium with the freedom of an autodidact, ready to break all rules. This attitude led him to develop a deep fondness for his sculptures, to which the many photographs of his studios and homes bear witness. Treating them almost as members of his household, he cherished their company and enjoyed recreating them in a variety of materials and situations. Picasso kept the majority of them in his private possession during his lifetime. It was only in 1966, through the large Paris retrospective Hommage à Picasso, that the public became fully aware of this side of his oeuvre. Following that exhibition, in 1967 MoMA presented The Sculpture of Picasso, which remains the first and last exhibition on this continent to survey the artist’s sculptures.

Picasso Sculpture will be installed throughout the entire fourth floor of MoMA’s galleries, allowing sufficient space for the sculptures to be viewed fully in the round. The exhibition will include a selection of relevant works on paper and about 30 of the remarkable photographs of Picasso’s sculptures taken by Brassaï (French, born Transylvania, 1899–1984). Picasso Sculpture is organized in chapters corresponding to the distinct periods during which the artist devoted himself to sculpture, each time exploring with fresh intensity the modern possibilities of this ancient art form. The exhibition focuses on the artist’s lifelong engagement with this genre from the point of view of materials and processes. The aim is to advance the understanding of what sculpture was for Picasso, and of how he revolutionized its history through a lifelong commitment to constant reinvention.