Photo Feature: Smelling the Sunset by the Verrazano Bridge 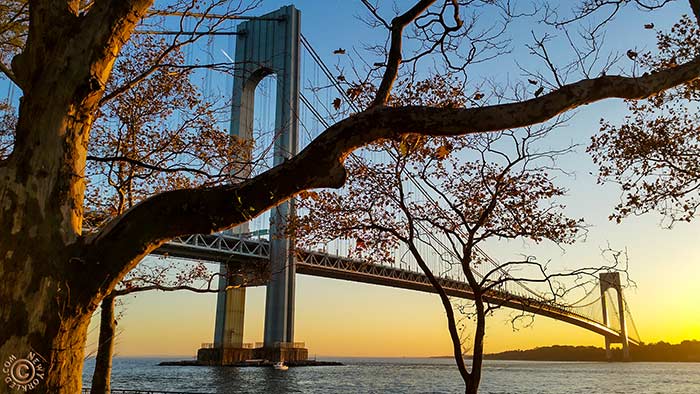 Photo Gallery near the bottom of this page.

We found ourselves traveling through Brooklyn recently for some much needed errands. From the Sunset Park area of the borough we spotted the Verrazano Bridge off in the distance and that’s all it took to get me going. As is so often the case in my life, I needed to drive just for the sake of doing so. South we headed, partially following the route I’d stored away in memory. Took us awhile to figure out how to get on the southbound lane of the Belt Parkway from where we were in Bay Ridge. For once in its life the GPS got it right and helped us along.

It was a gorgeous Indian summer evening with the sunset fast approaching and I couldn’t think of a better time for an unplanned stop like this.

There’s a parking spot just north of the bridge right off the promenade. As I pulled in, I didn’t bother fighting back the tears welling up in my eyes. I immediately recognized the feeling. I’ve been here so many times in the past. Even now, recounting this story, I feel it happening again, yet of course, nowhere near as it had that day.

Before us was the Hudson River with the golden sun not so far above the horizon. Considering the month (mid-October), you just knew it would fully touch down within the half hour. Outside, the breeze was strong and brisk. Not cold, not chilled…just perfect! Folks jogged and bicycled past in either direction whilst men fishing near the Verrazano’s approach stood by their rods awaiting their next catch.

There I walked, rather, I strolled with an indescribable lightness of being. If I were any lighter then I’d have been able to fly.

I did what I’ve enjoyed for years; I took photos while simultaneously cherishing these moments. We stayed long enough for the sun to drop down behind the Staten Island skyline and then headed home.

As mentioned, I’ve experienced such things often in the past but the last time the sensation was this strong was a few years ago during our last visit to the San Francisco Bay region. Much like our trip to the bridge it’d been years since we last visited the west coast. I’d been undergoing an extraordinary amount of stress both times, the depths of which I hadn’t discovered until venturing upon these journeys.

Here’s to recognizing the need for those spur of the moment excursions and in turn, stopping to look around, raising one’s head and smelling the air.