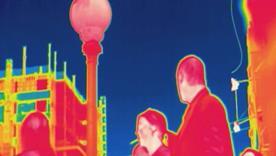 (New York, N.Y.) March 5, 2015  —  Artist Peggy Ahwesh’s City Thermogram, a portrait of the urban everyday through the lens of a heat-sensitive camera, will warm up Times Square’s signage from 11:57 pm to midnight each night in April. This project is a part of Midnight Moment, a monthly presentation by The Times Square Advertising Coalition (TSAC) and Times Square Arts. For April’s Midnight Moment, TSAC and Times Square Arts have partnered with Moving Image, a video, film, and new media art fair that will take place March 5-8, 2015, at the Waterfront Tunnel event space in Chelsea. City Thermogram was shot with a thermal camera from Princeton’s MIRTHE Lab, funded by the National Science Foundation.

Using this innovative, heat-sensitive camera, the piece recasts our ‘photographic’ world into one of unexpected revelations about our bodies, energy sources and personal devices. While this technology is usually used for scientific purposes, in Ahwesh’s hands the camera reveals the dynamism of the human body and offers a heat-based visualization of the electrical power grid that we all operate within.

Artist Peggy Ahwesh said, “Shooting city views with a heat sensitive camera, I wandered with no particular goal, only amazement at the heat seeking bodies around me – people unaware of their energy potential – and the glow of the heat generating systems and devices we rely on – the cell phone, electrical power grid, the computer, steam as it rises from underground and hot summer streets.”

Edward Winkleman and Murat Orozobekov, Co-Founders of Moving Image Fair, said, “We are delighted with how this collaboration has worked out so well for everyone involved. From the insightful feedback from the TSAC and Times Square Art teams, to the enthusiasm from the participating artists and galleries, to the pure joy of seeing how people respond to these artworks in Times Square, we couldn’t have imagined a more productive partnership for Moving Image. We cannot wait to see this year’s selection, Peggy Ahwesh’s terrific “City Thermogram,” go up on the jumbo screens. We cannot thanks The Times Square Advertising Coalition and Times Square Arts enough for their generous support of video artists.”

Tim Tompkins, President of the Times Square Alliance, said, “With hundreds of thousands of daily employees, residents and visitors contributing to the tumble and tide of the neighborhood, Times Square is the ideal location to demonstrate the internal power and energy unleashed into the public realm by the human body each day.”

Harry Coghlan, Chairman of the Times Square Advertising Coalition, said “The high-tech digital screens in the Crossroads of the World are the perfect platform to display a piece using cutting-edge scientific technology.”

Peggy Ahwesh is a media artist who got her start in the 1970’s with Super 8 filmmaking. Ahwesh’s work creates a kind of renegade ‘ethnography of the everyday,’ approaching culturally complex issues with disarming simplicity and with risk-taking vulnerability. Her work has exhibited worldwide including at the New Museum, New York, NY; Carnegie Museum of Art, Pittsburgh, PA; The Tate Modern, London, UK; Guggenheim Museum, Bilboa, Spain and her films featured at the Whitney Biennial, NY (5 editions); “The American Century”, Whitney Museum, NY; and at “WACK! Art and the Feminist Revolution” 2008, MoMA P.S.1, Queens, NY. Her works are in the permanent collection of the Museum of Modern Art, the Library of Congress, among others. She has received grants and awards including from the Jerome Foundation, the Guggenheim Foundation, Creative Capital, NYSC and the Alpert Award in the Arts. Peggy Ahwesh was born in Pittsburgh, PA and currently lives and works between Brooklyn, NY and the Catskills. She is represented by Microscope Gallery, New York.

Moving Image was conceived to offer a viewing experience with the excitement and vitality of a fair, while allowing moving image-based artworks to be understood and appreciated on their own terms. Participation is by invitation only. The newly formed Moving Image Curatorial Advisory Committee for New York 2015 is inviting a selection of international commercial galleries and non-profit institutions to present single-channel videos, single-channel projections, video sculptures, and other larger video installations.