Over Here: A Centennial Commemoration of World War I Memorials in NYC Parks

At the Central Park Arsenal Gallery, located on the third floor of 830 5th Ave, New York is their latest exhibition. It consists of photographs, new and old, as well as the occasional replica sculpture; all detailing the various monuments that have existed and still exist within New York City’s Parks; which in turn pay tribute to the many lives lost.

Being a native New Yorker I learned about the historical background of many memorials I was familiar with and I also learned of others which are long gone or have been moved from their original locales. Whether you’re a tourist or from the Bronx, or any one of the other boroughs, there’s a good chance you’ll recognize one or more of the items presented at the gallery.

Aside from what’s found within the gallery there’s as well, a life-sized Doughboy on the first floor of the building. Hanging off one wrist is a little sign with the following text: ” 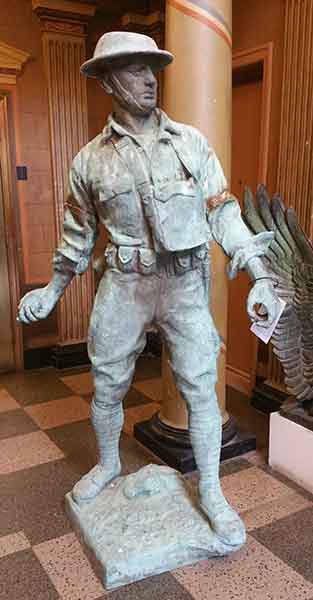 Consigned for four decades to Parks’ monument storage, the Highbridge Doughboy once stood proudly at a small park triangle at Ogden and University Avenues in the University Heights or Highbridge section of the Bronx. It was erected to honor the 21 local servicemen who died while serving their country in World War I, and the many more from that community who served. The Bronx sculpture was fabricated by the local J.M. Fiske Iron works. Max Hausle, architect of several parks comfort stations, including on at Keltch Park, is credited with the monument’s design. The term “doughboy,” popularized during World War I, refers to an infantryman, and this sculpture is one of nine such states erected in New York City’s parks. It was commissioned by the Highbridge Regular Democratic Club at a cost of $6,000, and it was dedicated in 1923. In 1974 the three Bronx honor rolls fastened to the granite pedestal were stolen, and in 1976 the rifle was also removed by vandals. Molds have already been made of missing components from this statue’s “twin” in Verona, New Jersey, and plans are in motion to conserve this battle-tested statue and place it in a new setting by 2018 near Yankee Stadium at the Highbridge gateway.

On one wall of the gallery is the following artistic rendering of Father Duffy Memorial, found in Times Square and photographed by millions, if not tens of millions, of tourists every year. The placard’s text:

This is one of several Parks artist’s renderings of the northern triangle of Times Square rnamed for Father Duffy when his statue was placed there in 1937. Father Duffy’s military service began in the Spanish-American War of 1898. He was First Lieutenant and chaplain of the legendary Fighting 69th Infantry, serving in Europe during World War I as part of the famed Rainbow Division, and earning a number of medals. After the war ended Father Duffy returned to New York, and in 1920 was appointed pastor of the Holy Cross Church, located at 237 West 42nd Street. Serving the theater-district community for over a decade, Father Duffy died on June 26, 1932. In 1949 veteran character actor Pat O’Brien portrayed Duffy in the Hollywood film based on his life, “The Fighting 69th,” which also starred James Cagney.

Another interesting item would be a photo showing a captured German submarine which was brought into Central Park for display. The placard:

To drum up support for the war effort, the Liberty Loan Committee in October 20, 1917 installed a captured German submarine, the U-C5, on the Sheep Meadow, where sheep once pastured and sunbathers now lounge. The vessel was transported from England in three sections where it was held first at the dock 132nd Street and the Hudson River. It was then brought in a military parade down the west side and into the park. The New York Times reported that each section was placed on a truck requiring 50 horses to pull the massive load. The boat was rechristened “U-Buy A Bond,” at first only open to Liberty Loan bondholders, and then converted to a Liberty bond sales booth.

Further down on this page, below the introductory placard is a quick image gallery of photos taken during our visit.

Please visit their official page to learn more about the Central Park Arsenal and its gallery.

The Introductory Placard which adequately summarizes the exhibition reads:

This year marks the centennial of the United States’ entry into World War I (1914-18). Known then simply as the “World War” or “Great War,” it engulfed many nations in a complex web of political and economic conflict that took the lives of nine million combatants and more than seven million civilians. New York contributed more to the war effort than any other city in the country. More than ten percent of all U.S. Troops came from New York State, and the city’s waterfront was critical to the war mobilization.

War is a great social leveler, and in New York City all communities, regardless of race, ethnicity, and economic status, suffered grave losses. Many who died in service to their country were first-generation immigrants from working-class families. Through local public subscription drives, neighbors and concerned citizens sponsored memorials honoring the local dead. More than 100 World War I memorials were commission for the parks of New York City, today nearly one in eight park monuments.

For the bereaved, military comrades, and the public at large, these memorials functioned as surrogate graves for those who had died on foreign soil. They are permanent reminders — in Bronx and stone, and landscape art — of the steep price our nation and our metropolis has paid for the preservation of its security and freedoms.

Our war memorials provide places of solace and contemplation, and many from the World War I era have bold aesthetic and symbolic impact in addition to their commemorative purpose. They complement the restorative mission of parks, and when most effective, they connect to a community and invite its citizens to reflect on something larger than themselves.

The monuments range widely from simple plaques and stone steles to full-blown sculptural, architectural and landscaped settings. Some notable examples include the extravagant Bronx Victory Memorial (1932) in Pelham Bay Park (unusual in that it commemorates the entire borough’s veterans), the sensual Dawn of Glory in Highland Park in Brooklyn, and the Eternal Light Flagstaff in Madison Square Park — the location for the annual citywide Veterans Day ceremony and embarkation spot for the parade up Fifth Avenue.

One of the more distinctive and recognizable variants of World War I memorials are the “dough-boy” statues. The term first used by the British in the late 18th century to describe soldiers and sailors, was popularized during the World War to refer to infantrymen in the American Expeditionary Forces. Nine doughboys were commissioned for New York City’s parks. They present a virile, engaged, and youthful everyman, in a realistic yet heroic pose — a decidedly different focus from the Civil War monuments that exalted great generals in war. The doughboys have a surprising psychological range from combative to pensive.

Ultimately the World war I monuments that continue to engage our attention transcend the circumstances of their creation. They are not simply about loss but about our collective humanity. This notion was crystallized in a speech at the Zion Park War Memorial in 1925: “The design itself does not alone symbolize the guaranteed freedom of our nation for the very names that will be inscribed upon it stand for toleration. The name of Sullivan will follow the name of Solomon, a Jew, A Catholic and Protestant are recorded in one panel, a Negro’s name is in juxtaposition to that of a white man.” The battles may have occurred “over there,” but it was over here that the healing and effort to make a better society took place.

Here is an image gallery featuring photos taken during our visit.