The Croton Aqueduct at 175 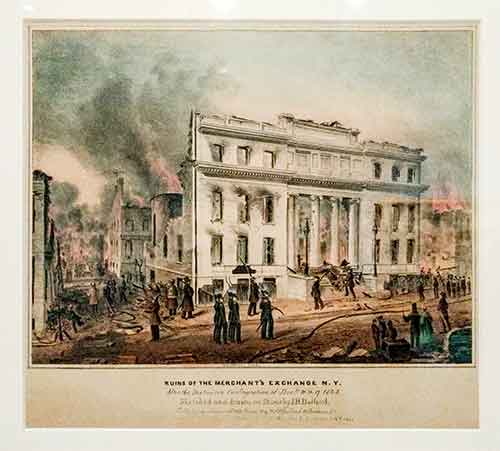 Ruins for the Merchant’s Exchange N.Y., 1835
John Henry Bufford, J.H. Bufford & Co., N. Currier
Hand colored lithograph
Museum of the City of New York, The Gerald Levino Collection, Gift of Geral LeVino
Work had not yet begun on the Croton Aqueduct when, on December 16, 1835, New York suffered the worst fire in the city’s history. Firefighters were tired from battling a blaze the night before, and the frigid weather froze the depleted supply of water from the 13th Street Reservoir in their hydrants, engines, and hoses.
By the next morning, nearly 700 buildings over a 20-block area from Wall Street to Coenties Slip, Broad Street to the East River, including the newly built Merchant’s Exchange, had been to “an indistinguishable mass of ruins” according to Philip Hone, whose own business had gone up in flames.

Had attended this exhibition at the MCNY and what a thrill. I mean, it’s honestly not what would excite your average museum-going individual but for there are those of us with a deep fondness for such historical gems where our great city of New York is concerned.

We’ve been familiar for some time with the original Croton fountain in City Hall Park and its ensuing move to Crotona Park in the Bronx. As well, we’ve had some limited knowledge about the Croton Distributing Reservoir in midtown Manhattan where the New York Public Library’s Stephen A. Schwarzman building and the adjoining Bryant Park now stand. Let’s not forget about all my visits to the New Croton Reservoir, located in Westchester County, NY. However, to come across an exhibit, like this one, which ties all the historical threads together in such fine fashion is indeed the thrill I’d referred to above. I discovered things which I’d never known before and the corresponding images hanging off the MCNY’s walls was an added delight; although, I’d have loved it more if there were additional details concerning the Westchester reservoir. I suppose that could be left to yet another exhibit in the future? Regardless, I’d highly recommend a visit to this museum not just for this particular showing but as well for all the other offerings to be found there.

From a placard titled ‘ABUNDANT WATER!’ 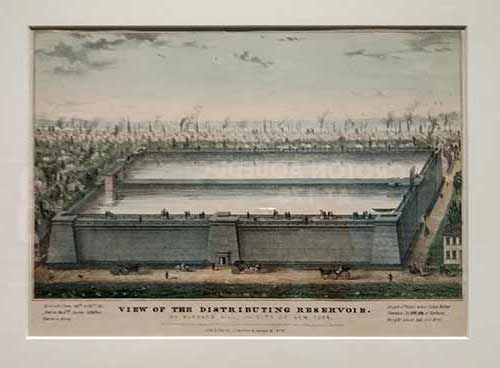 View of the Distributing Reservoir, 1842
N. Currier
Hand colored lithograph
Museum of the City of New York, gift of Mrs. J. Insley Blair,
Like the figures walking the rim in this view of the Distributing Reservoir, poet Walt Whitman visited the structure in 1849. He imagine in his column for the New York Sunday Dispatch what it would be like to walk “on the battlements of the Croton Reservoir” in one hundred years’ time: “Then these immense stretches of vacant ground below, will be covered with houses; the paved street will clatter with innumerable carts and resound to deafening cries” and yet, he thought “ages after ages, these Croton works will last…long long after we of the present time are under sod.”

On October 14, 1842, the Croton Aqueduct opened with a day-long celebration and parade. The New York Herald crowed, “the Supreme Ruler of the Universe looked down with delight upon this celebration of an event, fraught with so many blessings to the Queen City of the greatest nation upon earth!”

The aqueduct could deliver between 42 and 60 million gallons of water a day, an amount that its builders believed would be sufficient for generations to come. But within 30 years, the city had already outgrown it. Population growth, the introduction of the sewer system, and the increasing use of indoor plumbing led the city to upgrade the aqueduct’s capacity and, in 1890, an entirely new, larger Croton Aqueduct was put into service. As demand for water increased, New York built the Catskills Aqueduct between 1907 and 1917 and the Delaware Aqueduct between 1927 and 1965 – each drawing more water from upstate watersheds.

Today, the city still gets about 9% of its water from the Croton system-traveling through parts of the New Croton Aqueduct, which was rehabilitated and re-opened in 2014. New York City’s Department of Environmental Protection maintains, monitors, and improves the city’s water supply. Recent projects include City Water Tunnel No. 3, the largest infrastructure project in the city’s modern history, begun in the 1970s and scheduled to be fully operational by 2015-continuing the legacy f the Croton Aqueduct and allowing New Yorkers to take for granted every drop that flows from their taps.

Here’s an additional photo gallery featuring images taken by New Yorkled as well as others furnished by the museum.

Following would be their official press release:

New York, NY (September 5, 2017): The Museum of the City of New York presents To Quench the Thirst of New Yorkers: the Croton Aqueduct at 175, an aquatic-themed exhibition celebrating the 175th anniversary of the opening of the original Croton Aqueduct system. The Croton Aqueduct brought badly needed fresh, clean water to New Yorkers for the first time and had a profound impact on the growth of the city. Featuring maps, drawings, and other historic artifacts, the exhibition showcases the letters and drawings of Fayette B. Tower, a young engineer who worked on the aqueduct, and reveals newly commissioned photographs by Nathan Kensinger, tracing the aqueduct’s route and revisiting sights that Tower sketched nearly two centuries ago.

Croton Water Celebration 1842
Joseph Fairfield Atwill
Lithograph
Museum of the City of New York, the J. Clarence Davies Collection, gift of J. Clarence Davies
According to the New York Herald, “The celebration commences at daylight with the roar of one hundred cannon, and all the fountains in the city immediately begun to send forth the limpid stream of the Croton.” In this view, the parade, which began at Battery Park and traveled up to Union Square and back, winds around City Hall Park and its new Croton fountain.

On October 14, 1842, New Yorkers lined the streets to watch the largest parade that the young city had ever seen. The occasion celebrated a new sight in New York: burbling fountains spraying clean, fresh water into the late fall air. The unparalleled engineering feat that was the Croton Aqueduct had finally been completed, bringing water from the Croton River through 41 miles of masonry powered solely by gravity. For a city surrounded by brackish, polluted waterways, underserved by public water pumps, prone to fire, and plagued by epidemics of water-borne disease, the fountains pointed to a future when clean water would become an everyday, yet deeply transformative, aspect of city life.

“This exhibition is a refreshing glimpse at the resilience and creativity in problem solving that has defined New York City from its earliest days,” said Whitney Donhauser, Ronay Menschel Director of the Museum of the City of New York. “Nineteenth century New Yorkers faced an existential crisis in the lack of fresh water that often led to devastating fires and rapid spreading of disease. Something needed to be done to save the city, and the solution ended up being the Croton Aqueduct. To Quench the Thirst of New Yorkers takes visitors on a journey through this city planning marvel and reminds us all that New Yorkers have always shown an innate ability to meet the monumental challenges that come along with being one of the world’s great urban centers

The exhibition is organized into four sections and is designed to show the extent to which the Croton Aqueduct transformed life in New York City.

Section 1: The Want of Fresh Water

An early observer wrote that Manhattan was “subject to one great inconvenience, which is the want of fresh water.” New York’s poor water supply was such a problem that in 1833 the state created a Water Commission to figure out how to bring water to New York City, and in 1835 citizens voted to create an aqueduct to bring water from the Croton River.

Construction began in 1837, led by Chief Engineer John B. Jervis. While under his tutelage, young assistant engineer Fayette B. Tower made drawings of eye-catching spots along the aqueduct line, including the Sing Sing Kill Bridge in what is now Ossining and High Bridge spanning the Harlem River. The show uses his drawings to represent the work that went into building the aqueduct and pairs his works with contemporary photographs of the same locations, commissioned for this exhibition and captured by Nathan Kensinger.

The Aqueduct opened on October 14, 1842 with abundant fanfare and the longest parade the city had ever seen. The aqueduct could supply at least 42 million gallons of water a day, as one observer noted, “Oh, who that has not been shut up in the great prison-cell of a city, and made to drink of its brackish springs, can estimate the blessings of the Croton Aqueduct? Clean, sweet, abundant, water!” Even so, over the following decades water usage increased with the introduction of indoor plumbing and sewers, straining the system to the point where the city opened an entirely new Croton Aqueduct to carry even more water in 1890. This addition was eventually followed by the Catskills Aqueduct, built between 1907 and 1917, and the Delaware Aqueduct, built between 1937 and 1965. Currently, the Catskill/Delaware systems supply about 90 percent of New York City’s water, but the Croton system continues to supply the remaining 10 percent.

The aqueduct gave the city some of its first iconic architectural achievements, including: the High Bridge, the city’s first bridge, built 35 years before the Brooklyn Bridge opened in 1883; two Manhattan reservoirs, one in what is now Central Park and the other on 42nd Street and Fifth Avenue; and the city’s first public fountains in City Hall Park, Bowling Green, and Union Square. Artists from 19th century printmakers to artists from the Ashcan School have depicted Croton-inspired scenes from the celebratory parade to the public fountains to the reservoir in Central Park, all of which are presented in the exhibition, which features works by Nathaniel Currier, Samuel Halpert, and Hayley Lever.

Every day 8.5 million New Yorkers turn on the tap and out comes one billion gallons of clean, drinkable water. That water has traveled through an elaborate system of reservoirs, aqueducts, and pipes drawing water from the Catskills, Delaware, and Croton watersheds. Fresh water is as taken for granted as lights that come on at the flip of a switch. Yet, for the city’s first 200 years, acquiring water for drinking, not to mention for cooking, livestock, household and street cleaning, and even fighting fires, was anything but simple.

To Quench the Thirst of New Yorkers invites New Yorkers and tourists alike to imagine New York City without fresh water to fight fires and fill ice trays and explores in detail one example of the resiliency and creativity New Yorkers have always shown when it comes to rising to meet the challenges of their time.

To Quench the Thirst of New Yorkers: The Croton Aqueduct at 175 is made possible by Theodore W. Scull.

Founded in 1923 as a private, nonprofit corporation, the Museum of the City of New York celebrates and interprets the city, educating the public about its distinctive character, especially its heritage of diversity, opportunity, and perpetual transformation. The Museum connects the past, present, and future of New York City, and serves the people of the city as well as visitors from around the world through exhibitions, school and public programs, publications, and collections. To connect with the Museum on social media, follow us on Instagram and Twitter at @MuseumofCityNY and visit our Facebook page atFacebook.com/MuseumofCityNY. For more information please visit www.mcny.org.