Once Upon A Place :: Aman Mojadidi

Once Upon A Place :: Aman Mojadidi 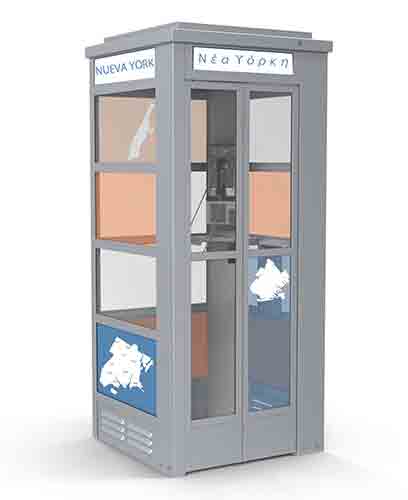 New York, NY – June 15, 2017 – Times Square Arts and artist Aman Mojadidi bring Once Upon a Place, an interactive public art installation that creates a platform for immigrant voices, to Duffy Square (46th Street and 7th Avenue) from June 27- September 5. Visitors will be invited to open the door of one of three repurposed telephone booths, pick up the receiver, and listen to oral histories of immigration from the newest New Yorkers. Visitors can also open the phone book inside each booth to read more about the storytellers’ communities both here in New York and the countries they have traveled from, and to leave behind a part of their own story if they wish. The installation will include 70 different stories that will last anywhere between 2 and 15 minutes. There will be a press opening ceremony on Tuesday, June 27th at 11:00 am after which the installation will be open to the public.

According to the Pew Research Center, by the year 2065 one in three Americans will be an immigrant or have immigrant parents. In New York City currently, more than a third of the city’s residents are foreign-born and close to 800 languages are spoken across the five boroughs. Once Upon a Place brings the city’s residents together by using three personalized phone booths to share stories of immigration, told by the New Yorkers who lived them. Afghan-American artist Aman Mojadidi recorded these stories over several months as part of his residency with Times Square Arts, creating a safe environment for residents to share the experiences that brought them to New York, either in English or in their mother tongue.

In current political and social conversations about borders, bans, and citizenship, the word “immigrants” can be used as a monolithic block, sweeping under a single label people from a wide variety of backgrounds. By giving participants a platform to tell their individual stories, Once Upon a Place instead explores that rich variety of personalities and journeys. Listeners are drawn into the lives of New York City residents from Bangladesh, Belgium, Burkina Faso, Cameroon, China, Colombia, Dominican Republic, Egypt, Gambia, Ghana, Ireland, Israel, Italy, Japan, Jordan, Liberia, Mexico, Nigeria, Philippines, Puerto Rico, Russia, Sierra Leone, Spain, Sri Lanka, Tibet, and Yemen, bringing an intersection of experiences to the Crossroads of the World.

In the heart of Times Square, thousands of local employees and residents walk side-by-side with visitors from around New York, around the country, and around the world. The three phone booths – three of the last phone booths that were removed from the streets of NYC, which were de-installed by the same man who first installed phone booths in Times Square in the 1980s – establish an intimate space for reflection and connection with our neighbors.

Aman Mojadidi, artist, said, “Beyond the immediate understanding that immigration, rather than some sort of social, cultural, economic, or political burden, is actually the foundation, the lifeblood, of great global cities such as New York, for me the most important outcome of Once Upon a Place is that no matter how different the experiences of migration might be among the storytellers, visitors will hear the common humanity in their voices that cannot, in fact should not, be confined by arbitrarily defined, historically drawn, and forcefully maintained geopolitical borders that will never truly reflect the realities of contemporary human experience.”

Debra Simon, Times Square Arts Director, said, “Aman’s work connects us to the individual journeys of others by the simple act of picking up a telephone receiver. The stories we hear come from a diverse group of immigrants who are connected by the decision to move to New York City.”

Tim Tompkins, President of the Times Square Alliance, said, “Times Square is part of a global community, welcoming visitors who might live across the world or a block away. According to NYC & Co, each year NYC welcomes almost 60 million visitors, around a fifth of whom come from places like the UK, Brazil, and China. Once Upon a Place is a natural fit for Times Square, helping us unite in appreciation and understanding of the different experiences that have brought all of us here.”

Aman Mojadidi is an Afghan-American artist who works largely through site-specific projects that utilize an experimental ethnographic approach, combining research, storytelling, and mixed-media installations to approach universal themes such as belonging, identity politics, conflict, artifactual history, and migration, intentionally blurring and merging the lines between fact and fiction, documentation and imagination. He holds degrees in Cultural Anthropology and has exhibited his work internationally. Exhibitions include the Dhaka Art Summit 2016, 12th Havana Biennale 2015, 3rd Asia Triennial Manchester 2014, 1st Kochi/Muziris Biennale 2012, and dOCUMENTA (13) in 2012. In 2012, he was selected as a TED Global Fellow for the critical contributions of his artistic practice while living in Kabul. Aman is currently based in Paris, but continues to travel extensively to implement site-specific interventions around the world, with his next stop being Times Square.

Times Square Arts, the public art program of the Times Square Alliance, collaborates with contemporary artists to experiment and present projects within one of the world’s most popular commercial centers and most iconic urban places. With projects such as Steve Lambert’s Capitalism Works for Me! True/False and Arles del Rio’s Nearness, Times Square Arts is committed to presenting artworks that encourage meaningful dialogue and amplify underrepresented voices on our highly visible public platform. In February 2017, Times Square Arts presented We Were Strangers Once Too, a public data sculpture by the Office for Creative Research highlighting the role that immigrants have played in the founding, development, and continued vibrancy of New York City.  www.TimesSquareNYC.org/Arts