Presents the N.Y. Premiere of 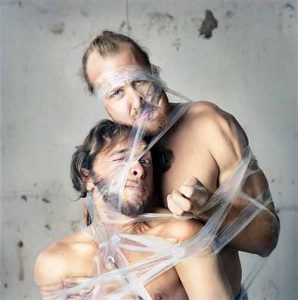 New York, NY, August 25, 2015 – NYU Skirball Center for the Performing Arts will open its 2015-16 season with the New York premiere of Attached by the Swedish Contemporary Circus duo Magmanus, running for two performances on September 25 and 26, 2015 at 8 pm.  There will be a free post-performance discussion with the performers after each performance.

Contemporary circus performers Magnus Bjøru and Manu Tiger combine circus, theater, interactive elements and lots of Velcro to explore the idea of attachment in its many forms. Surrounded by stadium lighting with various contraptions dotting the stage, the performers’ Velcro-suited bodies make contact and are cleaved apart with the recognizable rip, demonstrating that everything and everyone—including the audience—is attached.

Magmanus is a Swedish circus company founded in 2009 by the Franco-Norwegian duo Manu Tiger (a small acrobat) and Magnus Bjoru (a large juggler) to spread happiness and inspire audiences to follow their dreams through impressive circus skills, humor and intensive interaction with the audience.  The duo has performed in 21 countries and on four continents, in venues ranging from traditional circus tents to festivals and street performances.  For more information, visit www.magmanus.com

NYU Skirball Center for the Performing Arts is the premier venue for the presentation of cultural and performing arts events for New York University and lower Manhattan. Led by Executive Director Michael Harrington, the NYU Skirball mission is to showcase and support diverse and eclectic talent from around the world, while cultivating audiences for live performance through deeper engagement opportunities. For more information visit:  www.nyuskirball.org.

Today, Governor Cuomo Clarifies that Decisions on re-Opening schools will be Region by Region and Not State-wide Update on August 7: During his Tele-Press Conference this morning, Governor Cuomo gives the okay for all school districts...
Read more