NYC Nonprofits Helping to Feed the Homeless and the Hungry + Volunteering

NYC Nonprofits Helping to Feed the Hungry and the Homeless

Within our city it’s hard to make one’s way through New York without coming across those who are homeless or in dire need of shelter &/or food. Whether it’s on the streets, in the subways, on a bus or indoors within certain public (and even private) locales the signs are there: We’ve got a problem…’and it’s a big one.

According to the nonprofit, Coalition for the Homeless the homeless predicament in New York City has been at the highest levels since the last Great Depression. In 2018 there were over 133,000 different individuals who slept within the NYC municipal shelter system. A number which includes over 45,000 homeless children. As per their page here, the numbers of those sleeping within such shelters is 59% higher than where they were 10 years ago with the number of homeless single adults at 142% higher than 10 years ago. They are brought to this state of living through no housing, poverty, unemployment, mental illness and a host of other reasons.

Through this page, and others to come, we hope to help shed light on those organizations reaching out to help feed those individuals in need. Keep in mind how those in need of food aren’t necessarily homeless. 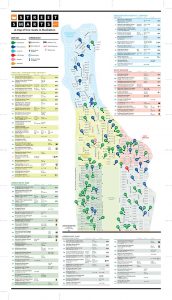 Street Smarts NYC, is a nonprofit organization helping the hungry locate
free and low-cost meals in Manhattan.  Their map and website, shares 160 locations with meal
service, including serving times, addresses and eligibility. At the time of this writing, we had trouble accessing the site but the downloadable PDF of the map itself could be found at NYC.gov’s Page Here.

The illustration features two pages of map and a large legend with keys indicating whether ‘All are welcomed’ or if a specific location caters so Senior Citizens, Aged under 21, HIV Positive, Women, Residents as well as whether the attendance of services is mandatory amongst other classifications.

Their Mission: “”To end hunger by organizing food, information and support for community survival, empowerment, and dignity. Food Bank For New York City has been working to end food poverty in our five boroughs for over 35 years. As the city’s largest hunger-relief organization, we employ a multifaceted approach centered on helping low-income New Yorkers overcome their circumstances and achieve greater independence.””

Volunteer Opportunities can be found on this page at the Food Bank for NYC site.

They’ve got a great online interactive map helping you find a food pantry or soup kitchen within the five boroughs of New York City. 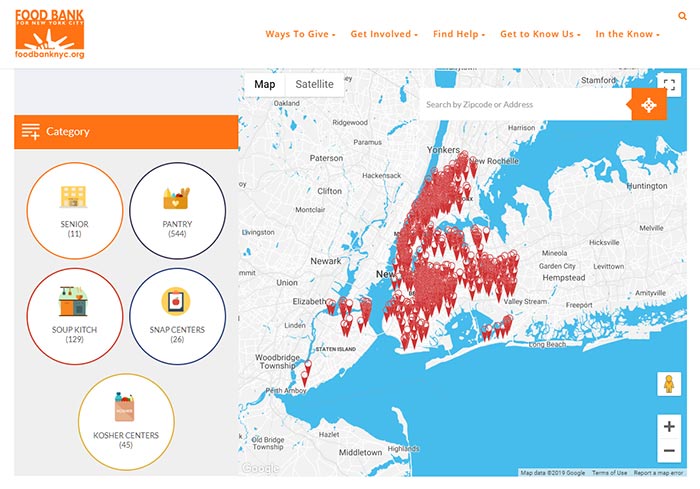 Has its own page with a map of local soup kitchens and food pantries as hosted by churches and such.

Mentioned on their page: Between the last Sunday of January and first Sunday of February, Timothy Cardinal Dolan calls on non-Catholics and Catholics alike to feed our neighbors by replenishing food pantries and soup kitchens that so many families rely on to survive.

Others will be listed on this page as will additional chances to lend a hand through volunteering.

Coalition for the Homeless