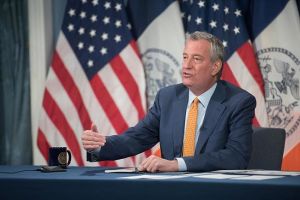 Today, during his near-daily press conference, I asked NYC Mayor de Blasio about the reasoning behind his announcement that Phase 2 for NYC would likely be in Early July. When asked if it were a matter of caution he responded by saying, “Exactly what I was doing, abundance of caution.”

Other regions of New York State have followed a pre-ordained lapse in time of 14 days when transitioning from one phase of reopening to another.

On June 4, the Mayor announced that our entry into Phase 2 would likely take place in Early July.

The reasoning behind the question is due to how other regions of the state were following a 14 day lapse in time when transitioning from one phase to another. 14 days following our Phase 1 reopening on June 8 would’ve placed us at June 22, and not early July as the Mayor had stated.

Mayor’s June 4 announcement that we would enter Phase 2 in July:

“If we all work together, phase one can move on to phase two. And at this moment, phase two can start as early as the beginning of July. So, we want to keep moving forward, but it’s going to take an intensive focus on health and safety at every moment in every business in everything we do.”

Therein, lied part of my answer. Actually, a foregone conclusion if you will. With NYC having been the epicenter of the COVID-19 crisis in America it would stand to figure that the Mayor was erring on the side of caution.

Of course there’s, as well, any concerns over the impact that tens, if not hundreds, of thousands of protestors having taken to the streets and being in close contact might have on infection rates. Not to mention the fact that the most densely populated city in the country would have massive numbers of workers returning to work and making use of the city’s mass transit system. The next two weeks or so should be very telling.

The Mayor clarified that they would be watching the numbers very carefully to see what the results are. If things look promising then the city’s entry into Phase 2 might come sooner than July.

Below would be my related exchange with the Mayor.

“ Mr. Mayor, … when you announced a likely phase two reopening for early July, were you erring on the side of caution? I ask that since, generally speaking, there has been a 14-day lapse for other regions when transitioning from one phase to another, which would have put us at June 22nd for your phase two reopening.”

“ … on phase two, you hit the nail on the head. Exactly what I was doing was, abundance of caution. We are not like the other regions of the state. We were the epicenter and remain the epicenter of this disease in this state. Our reopening is much more complex than any other part of the state. There’s a reason why we are the last to go to phase one. You are absolutely correct, Luis. According to the official chart of the State, it could be as little as two weeks until you get to phase two. But I want to keep expectations a little lower than that. We’re going to be in constant communication with the State. We’re going to be watching very carefully what’s happening with our indicators and threshold. If we don’t like what we see, we are going to slow down the pace. If we do like what we see, we might be able to go even faster. But I think if people have in mind, think about the beginning of July as the target, I think that is a safer, smarter way to think about it. Be ready. Could it be earlier? It could be.

But I don’t want expectations so high about it being later in June and then the disappointment, if it can’t happen. If I start to see the indicators and thresholds going in the wrong direction, I’m going to be very vocal about it. And remember we got between 200,000 and 400,000 people coming back to work. We’re obviously watching what the impact of these protests and people being in close proximity will be, got some X-factors here that are causing some pause. So, I want you to understand that you exactly are right that I did that purposefully.”