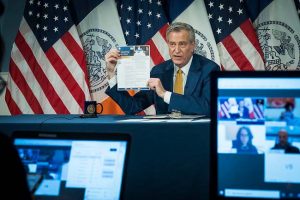 This week, NYC Mayor de Blasio reiterated that which he first mentioned on April 24, 2020. A $10 million public awareness campaign reaching out to all New Yorkers. Part of its aim would be for the sake of informing folks of the need for COVID-19 testing. With the city’s ability to test folks en masse continuously increasing on a weekly basis, perhaps the Mayor felt it was time to follow up on his original promise.

This subject’s been in the back of my mind and I’ve anticipated the Mayor timing this just right with the increase in testing abilities. Although, he’d originally hinted at a May timeline.

Not long ago, I asked the mayor if he’d considered a demonstration of the much easier and safer ‘Self Swab and Spit’ Covid-19 Diagnostic Test. He responded by saying that yes, they would do such a demonstration. Today, during his near-daily press conference, he stated how people needed to know that the testing was simple, easy, quick and free. I imagine they’ll be revealing an actual demonstration of the test through this campaign.

On this same day, NY Governor Andrew Cuomo revealed a media-driven partnership with Rosie Perez and Chris Rock. The two stars would “help build communication and education on the importance of wearing a mask and social distancing and the availability of testing and healthcare in the state.”

Following, would be the Mayor’s statement from today followed by his related statement on April 24.

“Point two, a massive public awareness campaign. This disease is confusing to everyone. For a lot of folks who haven’t had as much access to information including if they don’t happen to speak English, it was very important to really double down with a huge public outreach campaign.”

“I want to add back in mid-March we ran the first big campaign, $8 million focused on television, print, digital, 15 languages, but we then found that we needed to do even more to reach the communities that needed more information that weren’t always getting it because of language barriers and economic realities. We had to get more and more information out there. And so, we have now initiated a $10 million public awareness campaign, advertisements specifically aimed at the hardest hit communities. And we’re hoping that more and more people of course so many people at home, that this will really reach people and saturate and get them all the information that will give them a sense of what to do, but also where to turn for help. TV, radio, digital, again, 15 languages focus on 88 particularly critical zip codes where we’ve seen the greatest challenges. “

April 24 statement from the Mayor:

“So, now we’re at situation where we’re able to get more and more people tested than ever before, and we want to get the word out. And really, it’s important for people to understand, because for months the message was there wasn’t much testing, and that was the sad truth. But now there’s more, and more every day. And I think a lot of folks weren’t sure what to make of testing, and so I’m going to keep saying from now on, testing is simple, it’s easy, it’s quick, and it’s free. And I want everyone to that, and to make sure everyone understands that. We’re going to do a huge advertising campaign, TV, radio, digital community, newspapers, billboards, you name it. We’re going to get the word out all over this city in multiple languages to let people know it is now time for more and more people to get tested. And with every passing day, every passing week, we’re going to expand the amount of testing, and who can get tested. So, right now, we want to focus in addition to all the folks who originally were getting tested, we want to focus on people who have symptoms. We want to focus on people that are in close contact with someone who tested positive for the coronavirus, and folks who were in facilities like nursing homes, adult care facilities, shelters. That’s where the focus is now, but it’s going to continue to grow from there.”