Here you’ll find links to Equestrian opportunities throughout NYC. Lessons seem to be available at most locations and rates are around $30/hour and up. Have fun trotting along. Please look below at a map with details. 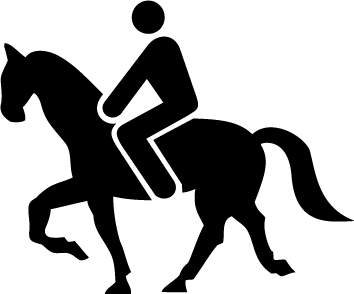 NOTE: As of End of April 2007, Claremont Stables has closed. Claremont Riding Academy – 175 West 89th Street, Manhattan (not very far from Central Park West) as excerpted from their instructional pamphlet Built in 1892, Claremont is the oldest continuously operated stable in the United States. It was built in 1892 as a public livery stable for the rapidly developing Upper West Side, and the tradition of quality established in those days has continued undiminished in this family-owned stable. Today Claremont has developed into a public riding stable of truly international reputation, known for the excellence of its horses and the quality of its teaching staff. Primarily a riding school, our horses are also available for hire on the six miles of bridle paths in Central Park. Cost is at and around $40 per hour and lessons are available. Be sure to call first and reserve. There are also special activities throughout the year. Be sure to call or stop by to learn more. (212) 724-5100