In Carmel, NY is the Chuang Yen Buddhist Monastery. A place we’d always wished to visit for the sake of seeing up close the largest Buddha Statue in the Western Hemisphere. 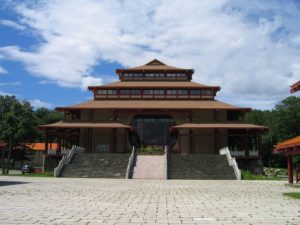 After a completely relaxing and refreshing drive through the roads leading to the monastery one goes on a small hike up an inclined path which is lined with statues on both sides. Each one having an inscription at the base. The biggest treat of this walk is the Great Buddha Hall standing at the very end at the top of the hill. Within is the Buddha Vairocana which stands at a whopping 37 feet in height. The statue itself is encircled by 10,000 small statues of the Buddha on a Lotus Terrace.

But we’re rushing things here. You see, the temple is truly spectacular in its architecture and beauty. We found ourselves waiting before entering through its doors since we were so taken with its appearance. We really needed to take it in and absorb what was presented to us. Just outside the front of the temple are two structures which we’ve as yet to identify. One is a large bell, and we DO MEAN Large! The other is the stick with which to presumably hit the bell itself. You can see the photos taken below on this page.

You may want to note that folks are encouraged to remove their shoes before entering the Great Hall. It’s within that you can sit or stand or walk around in peaceful tranquility as you are awed by the great statue as well as the artwork plus the photos which are found on bulletin boards hanging off the walls inside. There’s also plenty of literature printed in both Chinese and English which one and all are welcomed to take home with them for the sake of learning more about meditation, and what Buddhism is all about.

Unfortunately we were unable to stay very long but we intend to revisit this temple in the future to bring you more photos and stories of the other structures and sights to be found on their grounds. It is not simply the Great Hall found on the premises but as well other structures dispersed throughout. So why not pay a visit to their site to take a look? 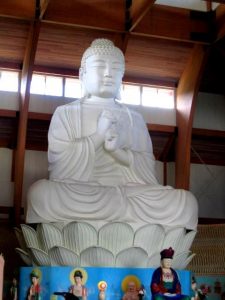 Construction of the Great Hall and the Buddha within took 8 years to complete.
Buddhism itself was originally founded in northeastern India. This religion eminated from the teachings of the Enlightened One also known as Buddha and Siddhartha Gautama.

Apart from India, Buddhism is also a major religion in countries such as Sri Lanka, Thailand, Laos, Cambodia, China, Japan amongst other nations.

It’s rather simple getting there from NYC. For our trip we took the Sprain Brook Parkway which leads into the Taconic State Parkway. Both are great joys to drive through. Although they are curvy they’re still plenty of fun! We then continued way up along the Taconic until we finally came across the exit which was to lead us onto Route 301 heading east into Carmel. It was along this road that we travelled for maybe several miles. You’ll want to keep an eye out for the entrance which is somewhat inconspicous. It’s at this entrance that you’ll see a Lion Statue or two. Heading East it will be on your left hand side.

Note: If you’re using an online mapping site or your own software then you should know to enter in the following address to locate the Monastery on the map: 2020 SR-301

You may also want to consult with the official site for additional directions.