Cites Executive Order from April which details the Issuance of Fines

Near the bottom of this page can be found a clip from today’s briefing as it relates to the content of this page.

During his press briefing today, NY Governor Andrew Cuomo would once again speak of the need for social distancing and mask wearing enforcement. This would as a response to increased reports of non-adherence over the 4th of July holiday weekend which had just passed.

As mentioned below, the Governor would, through a slide, make a reference to Executive Order No. 202.14: Continuing Temporary Suspension and Modification of Laws Relating to the Disaster Emergency signed by him on April 7, 2020. It would illustrate guidance for the issuance of fines to individuals participating in gatherings contrary to mandated restrictions.

For weeks now, the Governor has spoken repeatedly of his concerns over New Yorkers flagrantly ignoring the need for following the state’s COVID-19 related mandates.

“You look at the festivities over July 4th, you see gatherings that are not socially distanced, they’re not wearing masks. You see it in Manhattan, you see it on Fire Island,” said Mr. Cuomo.

“There are reports Upstate of gatherings where people aren’t socially distanced and people aren’t wearing masks. You know, I don’t know how else to say it: Actions have consequences. Our success was a function of our action. … If we change what we’re doing, you’re going to change the trajectory of the virus.”

“I need, we need, every person in the state needs the local governments to enforce the law.”

“I understand that it is not politically pleasant to enforce the mask law or the gathering law or the socially distanced law. I get it. I get that politically, it’s difficult for the local governments to do it. But it is the law. And if we don’t do it, there’s going to be a serious problem. It’s not a local government law. It’s a state law, so I get the politics and I said to them, “I have no problem taking responsibility. Mr. Mayor, tell your police when they go out to enforce the law. They can say, ‘Don’t blame the Mayor. It’s the Governor. Blame Governor Cuomo.’ County Executive, tell your police when they hand out a summons, say, ‘This is not a county law. It’s a state law. Blame the Governor.'” I don’t have a problem with that, but they have to enforce the law. We do not have a state police department that is a large enough to enforce the law in the entire State of New York. That’s why we have local police agencies, but they have to do their job and they have to enforce the law and the law is clear.“ 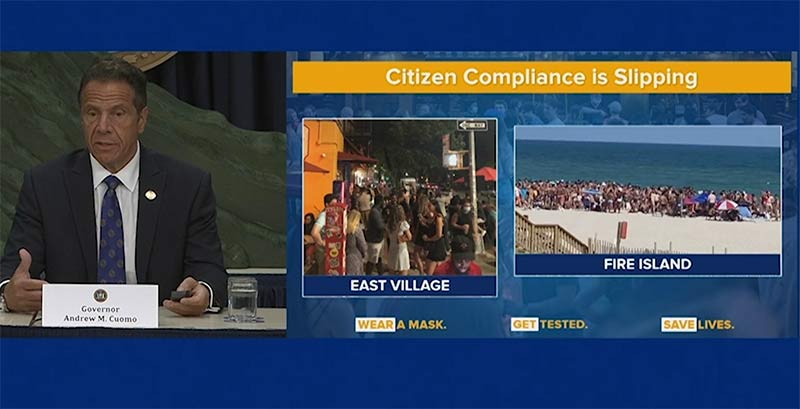 As has been the norm during his press briefings, slides would appear clarifying that which the Governor would be referring to in speech.

One slide which stands out today would appear to suggest the encouragement of fine issuance as they pertain to the non-adherence to COVID-19 rules which mandate social distancing, the wearing of masks and mass gatherings.

It read as follows:

Note: The following refers to:

No. 202.14: Continuing Temporary Suspension and Modification of Laws Relating to the Disaster Emergency

The text below in bold red is a continuation of that which is found within the same executive order referenced above.

Our Executive Orders have made violations of mask wearing, social distancing, and mass gathering guidelines a violation of public health law 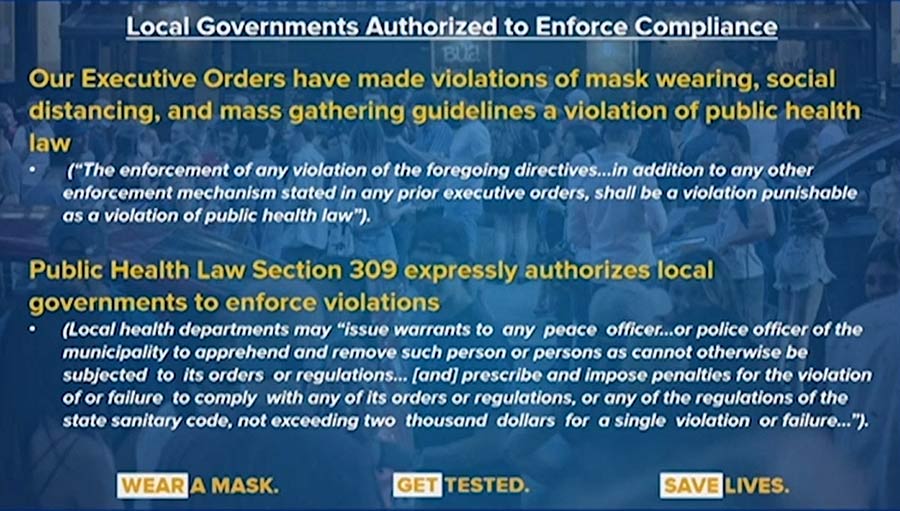 On July 2, there would be a question asked of NYC Mayor Bill de Blasio referencing that which the Governor had spoken of on the day prior. That is, the lack of local enforcement when it came to individuals congregating outside bars and restaurants. The Governor would appear to be laying the blame for the postponement of indoor dining in NYC upon the lack of enforcement.

In response the Mayor stated, “We do not believe in handing out fines and people are already financially troubled, which is pretty much everyone in this city, if we can solve the problem in other ways.”

Contextually speaking, it’s not clear if those individuals congregating as patrons of alcohol serving establishments are the ones who are financially troubled as the Mayor claims.

During today's tele-Press Conference, NY Governor Cuomo announced that, thus far, the state has administered over 6 million diagnostic COVID-19 tests since March. He also reported that nearly 59,000 tests were given yesterday. The number...
Read more