On April 29, 2020, New York Governor Andrew M. Cuomo would give one of the most stirring lectures in the history of his daily Press Conferences. He’d outline how ugly political partisanship is in the face of the COVID-19 Pandemic. How politicians want to fund corporate America instead of funding hard working Americans. The Governor would draw a correlation from politics to the people who are suffering, and on to an America that’s tough, caring and united. So much so, that they would collectively create the ‘Portrait of America’ wall of donated masks which he revealed near the end of his briefing.

Recent talk of partisan politics began with Mr. Cuomo’s indictment of Senate Majority Leader Mitch McConnell a week ago; as a response to McConnell’s referance to the COVID-19 Bill(s) as ‘Bailouts for Blue States’. On that day he would refer to the Senate Leader as the Grim Reaper.

Thus would begin the Governor’s address of bad politics. A paralleling sermon taking us from the subject of bad leaders to Americans who care for each other. People who are strong, unified, tough and loving. People whom such leaders should be following and emulating. 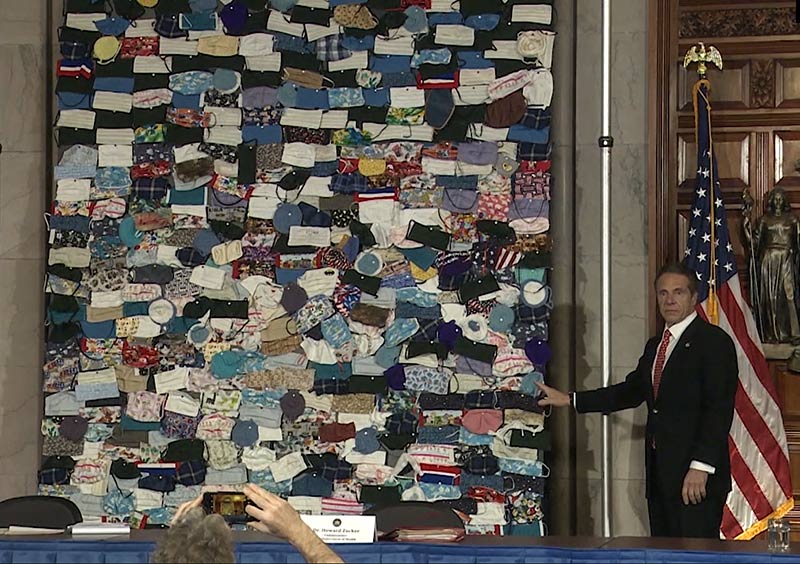 “That’s what this is really about. They want to fund corporate America. That’s who puts money in their pockets. And I say let’s fund working Americans. That’s the choice. Bail out us, them. No, it’s just theater. It’s just smoke and mirrors to avoid the American people seeing the reality, which is whose pocket they want to put money in, versus whose pocket state and local governments want to fund,” said the Governor.

Governor Cuomo would continue on with how principled the American people are. He’d refer to the recent sole N95 mask and note he received from a Kansas farmer seeking nothing more than to help the suffering.

“… when I said we need help in our emergency rooms and hospitals and 95,000 nurses and doctors from across the nation said we will come to New York to help. We’ll come into the emergency room. We’ll come into the hospital. I understand it’s COVID I will leave my family, and I will come to help yours. That’s America. That’s who we are and that’s who we have shown ourselves to be in the middle of this crisis. The crisis brings out the best and the worst, yes. And the best of America is beautiful and that’s what we’ve seen. Because, yes, we are tough. Yes, we are smart. Yes, we are disciplined. Yes, we are united. Yes, we’re loving, loving, because we are Americans. And that’s who we are and how we are as Americans. And I just hope the political leadership of this nation understands how good we are as a people.”

The Governor would end his briefing by revealing a wall filled with masks donated from all over America. He would mention how thousands of such masks were sent to his office from people who wanted nothing more than to help in the face of adversity, in the face of a crisis, in the face of suffering.

“I want to show you a self-portrait that was done by American people. This is a self-portrait of America, okay? That’s a self-portrait of America. You know what it spells? It spells love. That’s what it spells. You have to look carefully, but that’s what the American people are saying. We received thousands of masks from all across America, unsolicited, in the mail, homemade, creative, personal, with beautiful notes from all across the country, literally. Just saying, thinking about you, “We care, we love you, we want to help.” And this is just people’s way of saying we care. And we want to help. This is what this country is about. And this is what Americans are about. A little bit more of this and a little bit less of the partisanship and the ugliness, and this country will be a better place.”

Here’s a video covering more of that which the Governor spoke of today.

Remember, act as if you're infected with COVID-19

You do not have to have symptoms in order to be infected. Thus, you may unknowningly be spreading the virus to others.