Below is a screenshot of the app’s page as it appears on my own smartphone. I’ve downloaded the app myself and do a writeup review after I’ve taken it for a test run. 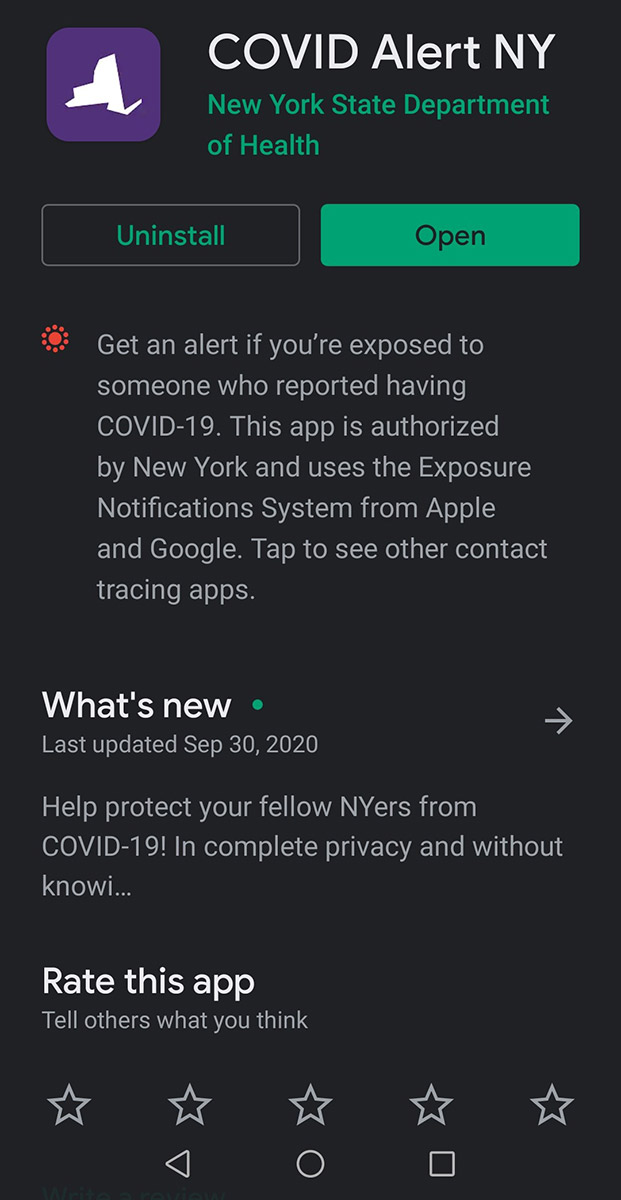 ““The apps use Exposure Notification System technology developed by Google and Apple to strengthen New York and New Jersey’s contact tracing programs statewide. The COVID Alert apps will notify users if they have been in close contact – within six feet for at least 10 minutes – with someone who has tested positive for COVID-19. Knowing about a potential exposure can help individuals quickly make a plan to stay safe, including contacting their physician or the State Health Department hotlines to get more information about quarantining and testing to prevent community spread. “”

When asked by a member of the press about any possibly privacy issues:

“No one has access to any data besides the location of the cellphone and the location only in proximity to a person that tested positive.”

“Again, the app code is open source. Anybody can go to the Linux foundation and get the code and take a look at how the program actually works and you’ll see that we don’t collect any data. There’s no locator device on the app so it doesn’t track anyone who downloads the app at all. So we were very sensitive to making sure – to get people to voluntarily download the app – otherwise it doesn’t work. So we want as many people.

We have a whole social marketing campaign that’s going to start today. We’re contacting all kinds of stakeholders throughout – all the business organizations, labor unions, clergy, many, many other community groups to get their members and their employees to download the app.

So, this helps protect them but it also helps them protect their friends and family and neighbors. So, like I said, it’s ADA compliant. So we went through great lengths and we’ve had expert security people review the application to ensure that everything is confidential – no one’s privacy – traditional contact tracing does too – it preserves your privacy and no personal information will be collected.”

The following is a transcript to the audio shared above on this page:

We have a very exciting announcement that has taken a lot of work and it’s really creative and smart and I think it can make a big difference. This is a technology-based contact tracing app. Larry Schwartz has been working on putting together the contact tracing operation for the state. As you know, testing is only as good as your contact tracing, right? Testing is to identify a person but so you can isolate and quarantine that person and then find the connections from that person. This contact tracing, we have about 15,000 people statewide who do contact tracing. They call them disease detectives. But we’ve been looking for a technology-based solution and Larry has been working with Bloomberg Philanthropies on this. They brought in Google, they brought in Apple and some other technology companies: NearForm, Tech: NYC, and the Linux Foundation. Today we are announcing an app that you can download for free from the app store called COVID Alert. What this app will do is, it will tell you if you were within 6 feet of a person who tested positive and if you were within 6 feet of a person who tested positive for 10 minutes. So, it will tell you if you’re “in contact” with a COVID positive person. How does it work? It works from your cell phone data. The app knows where your cell phone is; the app will know where a person who tested positive was through their cell phone, and the app can tell you if you were within 6 feet of that person. The way it will work is when a person tests positive, the Department of Health contacts that person and asks that person if they have an iPhone and then gives that person a password. That person types in their password for their phone and then any other phone that comes within 6 feet of that phone is on the app. It doesn’t give names. It doesn’t give any private information. it’s voluntary. You have to download the app but it’s a great tool to alert you if you happen to be within 6 feet of a person who tests positive. It’s called COVID Alert. Not only will it be for New York residents, but it will be New York, New Jersey, Pennsylvania, Delaware and Connecticut will be coming online soon. So, even if you’re traveling in the Metropolitan area it will tell you if you were in contact with a person- it’s using technology, really, on a level it’s never been used before. Google has been very helpful on this. Apple has been extraordinarily helpful on it. And I think it’s going to not only bring contact tracing to a new level but it’s going to give people comfort. Larry, do you want to correct any misstatements I made or give some more information on how it works?

Larry Schwartz: I will add to some of the things Governor that you had mentioned. So as the Governor stated the COVID Alert NY app is live today. It works on both Apple iPhones as well as any Android phone so you can either go to the Apple store, the Google Play store and download that app. The notification tool is an enhancement to the traditional contact tracing that the State is currently using, so this is an additional tool. We’ve been adding tools since May 15, as the Governor has alluded to, to minimize community spread, which is the ultimate goal of contact tracing and we did two pilot tests. We did one with SUNY, with Albany, Plattsburgh and Oswego with 1,000 students. We also did a pilot test with Columbia Engineering. This is an open source app so anyone can go in there and take a look at the app and the actual program. It’s completely confidential. We don’t collect any data. We don’t track people so if there’s any concern it’s a completely voluntary program, it’s for 18 and above, it’s ADA-compliant, we’ve had security experts review the app, it’s also in the top six languages spoken in New York State and what will happen is, as the Governor mentioned, if you have the app, if Governor Cuomo and Larry Schwartz both had the COVID Alert NY app on their iPhones and I tested positive and I was with him six feet for at least 10 minutes with Governor Cuomo, which would be my pleasure, I would get a notification and the notification would tell me to quarantine, to stay at home, and to call my physician or call the New York State or the New York City hotline about either getting tested or getting additional information. So again, it’s an easy technology, it’s an additional tool to our traditional contact tracing program to prevent community spread throughout the state.

Governor Cuomo: Thank you, Larry. We believe this is the first in the nation usage of this. It really is an advancement, an advancement that was done very quickly. Again, it’s going to be for the states that we work in concert with because people do travel throughout the region and all the states in the region will be on this. I want to thank Larry Schwartz very much. I’ve known Larry for more years than I care to say. He’s been a total government professional and I called him up and I asked him for a personal favor to come help here once again to do public service and he’s done an extraordinary job and I want to thank Mayor Bloomberg who took on this contact tracing task and Bloomberg Philanthropies. We were overloaded when this first started. We had to put together a surgeon Flex system, we had to put together a testing system and then we had to put together contact tracing so Larry Schwartz and Mayor Bloomberg really took this task on and as I said we will make it available to any other state in the country that wants to use it and it’s a great, great tool. It will not only help us do contact tracing but can also get people a sense of security and confidence. You know anxiety is very high, everybody is wondering, I was next to this person, I was next to this person, but this can actually give you some data and facts can help reduce anxiety and that is a good thing. Sometimes facts can increase anxiety but that’s more in my position in life.