For anyone interested in taking a COVID-19 Test &/or curious about the eligibility criteria can visit: coronavirus.health.ny.gov/covid-19-testing

As New York State’s ability to carry out massive statewide testing continues to grow, Governor Andrew Cuomo and Mayor Bill de Blasio are now ramping up their efforts to increase public awareness. Awareness that’s needed for New Yorker’s to be convinced of the need for COVID-19 testing; something, which since the beginning has been voluntary.

Within our areas, at the moment, there are two methods of testing being administered.

Ten days ago, the Governor had one administered to him on live television. A very long swab would be inserted into his nasal cavity in an almost unsightly demonstration. Yours truly experienced something like this long ago. Not painful, but surely something to never be forgotten.

The other method would be that which Mayor de Blasio has mentioned numerous times during his COVID-19 Response Press Conferences. He’s described it as being easier and safer. Easier because it allows for a smaller swab to be applied to the nose followed by a spit sample. Safer because it can be self administered, thus allowing for safe distancing wherein personnel are concerned.

This page was originally meant as a reproach to Governor Cuomo’s need to promote the more unpleasant appearing standard test. Today, he would make a reference to it, “There is no cost to the test. It does not hurt. It is pain free. I did the test on live TV, didn’t flinch. It’s just a nasal swab, there’s no needle.”

I’m guessing I’m not the only one who thinks that to be a matter of perspective and personal opinion.

But then I remembered what the Mayor said to me one week ago. My thinking revolved around selling the test. If it’s mandatory then you need to convince people to take it.

I asked about making a demonstration for this easier test and, aside from agreeing, the mayor stated, “the self-swab test is even a step further in the right direction and it’s smart for us to show people how it works because more and more labs are now accepting that test. It’s definitely the – where we’re going to trend going forward. It is faster, it is easier. It causes less chance of the patient coughing or sneezing. So not every lab is taking it and we still need to have some test kits of the other kind so we can maximize our options. But more and more it will be the self-swab test.”

Therein lay the method to their madness. The more unsightly tests are still around and so, they need to be sold as an option to those seeking out testing. Although, as the Mayor mentioned, the easier one will become more and more the norm.

As I’ve stated numerous times, the need for mass testing is important. The more we can keep track of the disease the better it’d be to contain it. 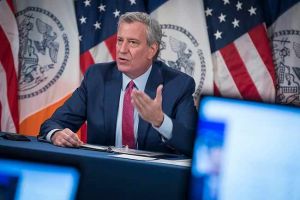